WHO tries to bolster fragile funding with new foundation CEO 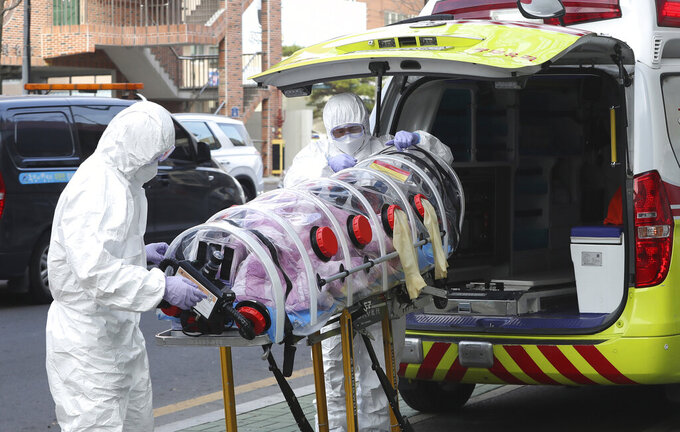 Medial workers carry a patient infected with the coronavirus onto an ambulance at an elderly care facility in Ulsan, South Korea, Monday, Dec. 7, 2020. South Korea's health minister said Monday that the Seoul metropolitan area is now a "COVID-19 war zone," as the country reported another 615 new infections and the virus appeared to be spreading faster. (Kim Young-tae/Yonhap via AP)

PARIS (AP) — Hoping to strengthen its funding, the World Health Organization is appointing a CEO to a foundation intended to bring in more private donations, which should leave the global health body less vulnerable if a country withdraws or cuts funding as the United States did.

Anil Soni will join the new WHO Foundation in January after eight years with the multinational pharmaceutical Viatris.

This year’s global coronavirus pandemic, as well as the Trump administration’s withdrawal from the world health body, has exposed WHO’s fragile funding base. The organization relies largely upon voluntary contributions from member nations as well as a handful of large foundations. That has left it open to criticism that it’s vulnerable to outside influence at the expense of global health priorities.

In an interview with The Associated Press ahead of the WHO Foundation announcement, Soni said his priority is to seek out corporate and individual donations. The foundation will join as a partner in the COVID-19 Solidarity Response Fund, which has raised $238 million so far.

“Part of what I’m doing and bringing to the foundation is the orientation of the private sector, which can and must do more to ensure equitable and speedy access to new technologies all around the world,” said Soni, who is American.

Soni has also been a senior advisor to the Bill & Melinda Gates Foundation, which this year was the second-largest contributor to WHO's budget after Germany. Although U.S. President-elect Joe Biden has said he wants the U.S. to to rejoin WHO after he takes office in January, Soni said the experience showed that the global body needs more flexibility in raising money.

“For many years, WHO has just been a vessel for big money, either from big donors or big countries, to do what those big donors or those big countries want. WHO has no ability to set the global health agenda, to focus resources where there’s the greatest burden of disease and death,” said Lawrence Gostin, a Georgetown University professor who has worked with WHO in the past.

But Gostin cautioned that raising private money has its own pitfalls. WHO has come under frequent criticism about the role of businesses in its decisions — particularly the pharmaceutical industry.

If corporations “get preferential access or any access to decision-making as a soft quid pro quo, it's disastrous for the organization, not only because it could influence what WHO is recommending but more important, it can be seen to influence it,” he said.

Soni said the goal of the foundation is more freedom for WHO, not less, “for it to to be the best version of itself and for it to succeed in its mission.”