WHO: Vaccine program gets access to nearly 2 billion doses 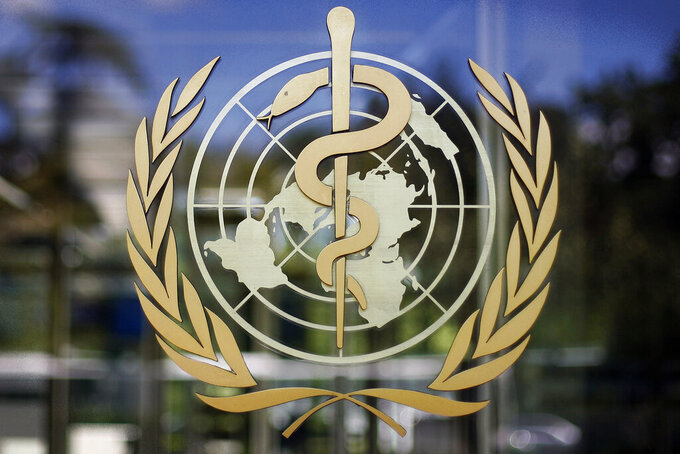 FILE - In this June 11, 2009, file photo, the logo of the World Health Organization is seen at the WHO headquarters in Geneva, Switzerland. The head of the World Health Organization says on Friday, Dec, 18, 2020 the U.N. health agency’s program to help get COVID-19 vaccines to all countries in need, has gained access to nearly 2 billion doses of several “promising” vaccine candidates. None of the agreements currently include the vaccines by Moderna or Pfizer-BioNTech, which is already in use in the United States, Canada and Britain. (AP Photo/Anja Niedringhaus, File)

GENEVA (AP) — The World Health Organization program to help get COVID-19 vaccines to all countries in need has access to nearly 2 billion doses of “promising” vaccine candidates, officials said Friday.

None of the agreements include the vaccines by Moderna, which took one stop closer to approval in the U.S. on Thursday, or Pfizer-BioNTech, which is already in use in the U.S., Canada and Britain and nearing approval in the European Union.

The initiative WHO is co-leading, known as COVAX, also has yet to receive firm pledges and a timeline from rich countries to share the vaccines they have already secured for themselves.

Of the approximately 12 billion doses of COVID-19 vaccines the pharmaceutical industry is expected to produce next year, about 9 billion shots have already been reserved by rich countries. Canada is leading the pack, with around 10 doses reserved per Canadian, according to the science analytics company Airfinity.

WHO Director-General Tedros Adhanom Ghebreyesus said the agreements mean that some 190 countries and economies taking part in the COVAX initiative will have access to vaccines “during the first half of next year.”

“This is fantastic news and a milestone in global health,” Tedros, an Ethiopian who goes by his first name, said at a media briefing also attended by COVAX and pharmaceutical industry leaders.

WHO and its partners in COVAX, the Gavi vaccine alliance and the Coalition for Epidemic Preparedness Innovations, were “working non-stop to start vaccination early next year,” he said, stressing that vaccines would not replace but complement techniques already proven to help stem the spread of the virus.

“If we don’t eradicate the disease, a virus can mutate,” Guterres said. “And vaccines that at a certain moment are effective can no longer be effective if things change.”

COVAX's vaccine dose arrangements include pharmaceutical makers British-Swedish AstraZeneca, U.S.-based Johnson & Johnson and the Serum Institute of India, though talks with others are ongoing.

“We are certainly in discussions with Pfizer and Moderna. We’re hoping to be able to reach agreements with them. But we were not ready this morning,” said Dr. Richard Hatchett, the head of the Coalition for Epidemic Preparedness Innovations.

Hatchett acknowledged that U.S. regulatory proceedings, the need to maintain the Moderna and Pfizer vaccines at sub-zero temperatures and cost issues were “all issues that are being talked about” with the two companies.

Dr. Seth Berkley, the head of the Gavi alliance, alluded to recent media reports — which includes one by The Associated Press — that pointed to growing concerns that funding and support were lacking for COVAX and that less-developed nations could be left behind.

Developing countries also need to show they have a plan in place to roll out the vaccines. The U.N.'s children's agency UNICEF, which would ship COVAX doses in the developing world, called a meeting this week with more than 300 vaccine procurement officials to go over what may be needed.

UNICEF has checklist running dozens of pages to prepare countries, said Benjamin Schreiber, a UNICEF immunization expert who is coordinating the COVAX rollout.

“We can't send vaccines to countries if they're not ready,” he said.