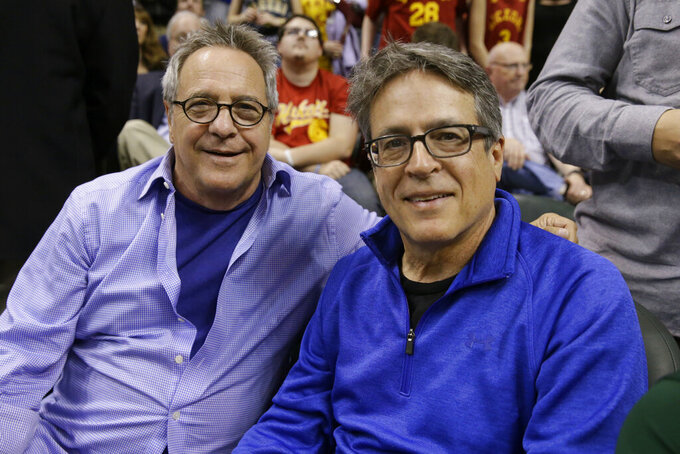 FILE - In this March 15, 2016, file photo, "Hoosiers" director David Anspaugh, left, and writer Angelo Pizzo pose during an NBA basketball game between the Indiana Pacers and the Boston Celtics in Indianapolis. “Hoosiers” shot all the way to No. 1 in The Associated Press best sports movies Top 25. (AP Photo/Michael Conroy, File)

For now and the foreseeable future, thanks to the coronavirus pandemic, there are no live sports to watch -- in person, on television, online.

Replays of past events are available, sure, but there’s rarely much joy in that. After all, one of the primary appeals of sports-in-the-moment is that no one -- participant or spectator -- knows what’s going to unfold, who’s going to win or lose, how and why it’ll happen or even exactly when.

Somehow, though, movies, no matter how old, are ripe for watching and re-watching. We're OK with seeing Jimmy Chitwood make that shot ... or Rocky Balboa fight Apollo Creed ... or Roy Hobbs smack a homer into the lights ... or Tom Hanks' character explain there's no crying in baseball ... over and over and over again. Familiarity with the who, what, where doesn’t necessarily spoil the show.

With all of that in mind, The Associated Press is presenting a one-of-its-kind Top 25 of sports movies, a suggestion of what to put on the screen while stuck at home. This is, of course, what we do at the AP: We rank things. So 70 writers and editors around the world voted on the best in the history of sports cinema.

These, and the rest of the rankings, represent movies that we love -- and that explain our love of sports.

Each Friday until May 22, starting with “A League of Their Own,” we will present stories examining the Top 10 from unique perspectives.

“Someone once described the challenge of writing a sports film like driving down a road full of potholes of cliches: You’re bound to hit some. You just have to build a vehicle that has a bullet-proof shock absorber, so they’re not noticed,” Angelo Pizzo, who wrote “Hoosiers” and another Top 25 selection, “Rudy,” said in a telephone interview.

“When sports films work, they work because the audience connects emotionally to the protagonist,” Pizzo said. “When people talk to me about ‘Rudy,’ if that movie works for them, it’s because they see themselves in Rudy. They see themselves as someone who is not appreciated, is not seen, is not valued. And by sheer force of will and belief and faith, they manage to break through. It’s not just about achieving the dream -- it’s about going on the journey to achieve the dream.”

Sports help us build communities, create a shared history. They speak to how we yearn to win and how we empathize with those who lose. They are capable of filling us with hope and despair, triumph and disaster -- often all four within a span of mere minutes.

Movies, meanwhile, can do the very same.

They might be profoundly educational or purely entertaining -- and, in the best of cases, both.

Filmmaking, no matter the approach, comes with a license to shade and shape, to imagine, to create, to figure out ways to take the audience wherever it needs to go.

Movies and sports share certain constructs, themes or patterns that emerge over and over.

The heroine/hero. The underdog. Good vs. evil. The protagonist’s path. The antagonist’s resistance.

Maybe that’s why the overlap of the realms resonates.

Maybe that’s why we watch.

“The world that sports creates has a couple of appealing things going for it. Unlike life, there are definable rules. There’s a way of scoring. There’s a way of declaring winners and losers. And it’s an escape from the rigors of our own day-to-day lives,” Pizzo said. “While sports are gone now, people who are sports fans -- or even partial sports fans -- are noticing how much of a role sports play in their lives.”

More on the AP Top 25 poll of sports movies: https://apnews.com/Sportsmovies