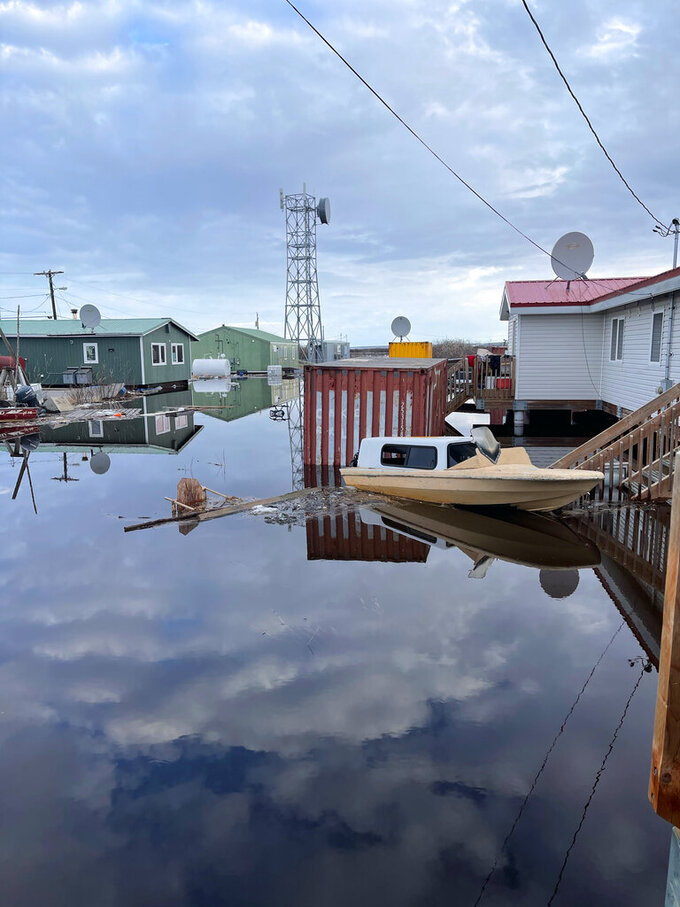 This photo provided by Nathan Hadley Jr. shows flooding in the village of Buckland, Alaska, on Thursday, May 13, 2021. An ice jam on the Buckland River, a half mile below the community, has caused the entire village of about 500 residents in northwest Alaska to be completely inundated. (Nathan Hadley Jr. via AP) 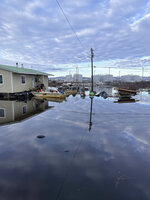 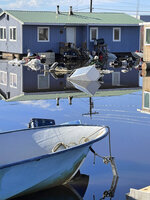 “Even using hip waders, I can’t leave my house because the water is too deep,” said Nathan Hadley Jr., the vice mayor of Buckland. He called the flooding the worst he’s seen in two decades there.

“Most of the town has been inundated, and the access road to the airport has been cut off by the floodwaters,” said Scott Berg, a meteorologist with the National Weather Service in Fairbanks.

There are volunteers using boats to take people around town, to the store and to deliver people to the air strip or pick them up for one of the two daily flights into town, Hadley said.

At least three families were evacuated overnight because of the raging water and ice, including one family because huge chunks were hitting the house on a street fronting the river, he said.

The ice jam on the Buckland River is about a quarter-mile below the community.

National Weather Service and local officials anticipate the water levels will stay high and fluctuate a little until the ice jam breaks, said Jeremy Zidek, a spokesman for the Alaska Division of Homeland Security and Emergency Management.

“The good news is that there’s not a lot of ice above the community, so it’s not anticipated that the jam will worsen, that water will just take some time to push that out into the ocean,” when it will allow the water level to drop, Zidek said.

It’s difficult to predict when the ice jam could break, said Crane Johnson, a hydrologist with the weather service’s Alaska-Pacific River Forecast Center.

Hadley said they are expecting a surge of water from melting snow later Thursday because it has been a warm day.

Homes in Buckland are built on stilts, and officials reported that water levels have come up to the bottom of homes, but have not gotten into anyone’s homes very much, Zidek said. Four-wheelers and snowmobiles in low-lying areas have been covered in water.

Haldey believes there may be water damage to some homes.

The three families in the community of about 500 people on the state’s northwest coast that evacuated have moved in with other family members or friends.

There are two shelters ready to go, but so far no one has gone to them. One shelter is for people who have not been vaccinated and need to quarantine after returning to the village, and who are awaiting COVID-19 rapid test results, Hadley said. The other is in an old city building. If needed, the school could be used as another shelter.

The community’s water plant and distribution system were operational, and water has not gone over the city’s protective dike.

The city also continues to generate electricity. While there were reports of fuel tanks spilling over, Zidek said the main fuel storage facility remains functional.

“Their critical infrastructure doesn’t seem to have any type of major damage,” he said.

Town and tribal officials met Wednesday to formulate a plan for possible flooding when the water began to rise. No one expected it to happen that quickly or for the water to rise as fast as it did.

Hadley was cooking a late dinner Wednesday night and watched huge chunks of ice moving pretty quickly on the river as he looked out his kitchen window.

“I took my eyes off for a few minutes, and looked back out, and the water was rushing inland,” he said.

He shut the cooker off, put on his hip waders and went out to move his two boys’ motorcycles, snowmobile and his truck.

“My house is on a high ground, and within a half hour my whole area was under water,” he said.

Buckland is an Inupiat Eskimo village about 475 miles (764 km) northwest of Anchorage.