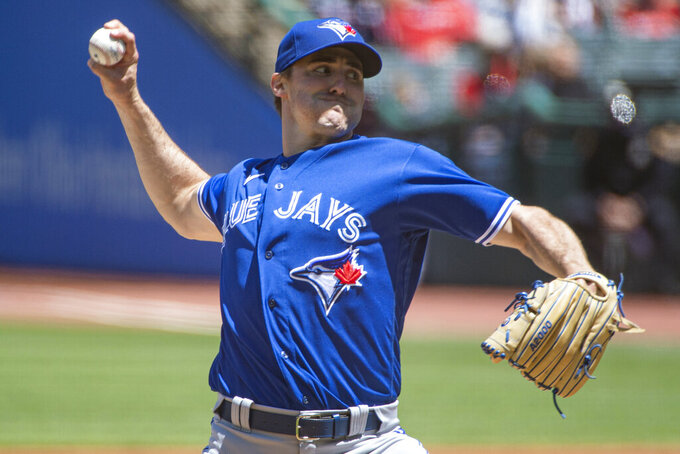 Toronto Blue Jays starting pitcher Ross Stripling delivers against the Cleveland Indians during the first inning of the first baseball game of a doubleheader in Cleveland, Sunday, May 30, 2021. (AP Photo/Phil Long) 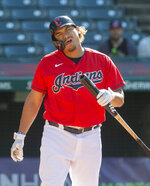 CLEVELAND (AP) — Tyler Chatwood forced in the tying run with his fourth straight walk in another wild outing, José Ramírez followed with a game-ending sacrifice fly and the Cleveland Indians rallied for two runs in the seventh inning without a hit to beat the Toronto Blue Jays 6-5 Sunday and gain a doubleheader split.

Teoscar Hernández and Rowdy Tellez homered in the fourth inning off Aaron Civale to lift Toronto to a 4-1 win the opener, and Blue Jays led 4-0 in the sixth inning of the nightcap of the twin-bill of seven-inning games under pandemic rules.

Cleveland's rally began when third baseman Santiago Espinal booted leadoff hitter Yu Chang’s grounder for an error. René Rivera hit an RBI double off Matz and scored on Rosario's single off the pitcher's glove as Cleveland cut its deficit to 4-2.

Toronto brought in Chatwood, who last Sunday walked two batters in the ninth against Tampa Bay, and Travis Bergen followed with three straight bases-loaded walks in the Blue Jays' 6-4 loss.

Marcus Semien’s RBI single off Emanuel Clase (3-2) gave Toronto broke a 5-4 lead in the top of the seventh, but Chatwood walked Chang on five pitches with one out in the bottom half, pinch-hitter Bradley Zimmer on four and César Hernández on five, then walked Rosario on a 3-1 count.

“For us to be good. Chatwood needs to do the job,” Blue Jays manager Charlie Montoyo said. “He needs to be the reliever that he has been. So you’ve got to give him the chance to regroup and do the job, get a double play ball or something. He just couldn’t do it. That’s two straight bad outings but we need him. That’s a fact. He was our best reliever for the first two months and he just needs to get it back.”

Anthony Castro relieved after Chatwood threw 25 of 32 pitches for balls, and José Ramírez followed with a fly to right fielder Randall Grichuk as Zimmer slid home with the winning run and Toronto was prevented from a three-game sweep.

“The players realized there was a little struggle throwing strikes, so they shrunk their strike zone,” Hale said. "That’s part of growing and understanding the game.”

Ramirez tried to keep his approach simple when he went to the plate with a chance to win the game.

“I’m looking to put the ball in play,” he said. “We were lucky something good happened.”

In the opener, Ross Stripling (1-3) held Cleveland to one run and two hits in five innings, winning for the first time since he was acquired from the Los Angeles Dodgers last Aug. 31. Rafael Dolis and Jordan Romano finished a four-hitter, with Romano getting his third save.

The teams played through rain and wind gusts of 45 mph Friday night before the game was called in the bottom of the seventh with Toronto winning 11-2. The Indians postponed Saturday’s game due to high winds.

Both teams are in a stretch of playing five straight seven-inning games — Toronto had a makeup doubleheader Thursday at the New York Yankees, and the Indians host the Chicago White Sox in a makeup twin-bill on Monday.

The Blue Jays start their second year of home game at their Triple-A affiliate's home in Buffalo, New York, on Tuesday night against Miami. Montoyo planned to visit Sahlen Field on Sunday night, and players will check out the ballpark Monday. Forced from home by Canadian government coronavirus restrictions, the Blue Jays were 17-9 in Buffalo last season and were 10-11 this season at their spring training site in Dunedin, Florida. Toronto also hopes to be playing finally having a home crowd advantage, which wasn’t the case in Florida.

“Those last four games against the Rays at home in Dunedin, they were all cheering for the Rays, technically in our home stadium,” Stripling said. “To have fans in the stands that are cheering for us and want us to win, that will be a big difference.”

Blue Jays: RHP Carl Edwards was added to the roster as the 27th man for the doubleheader. RHP Ty Tice was designated for assignment.

Indians: INF Ernie Clement was recalled from Triple-A Columbus to be the 27th man.