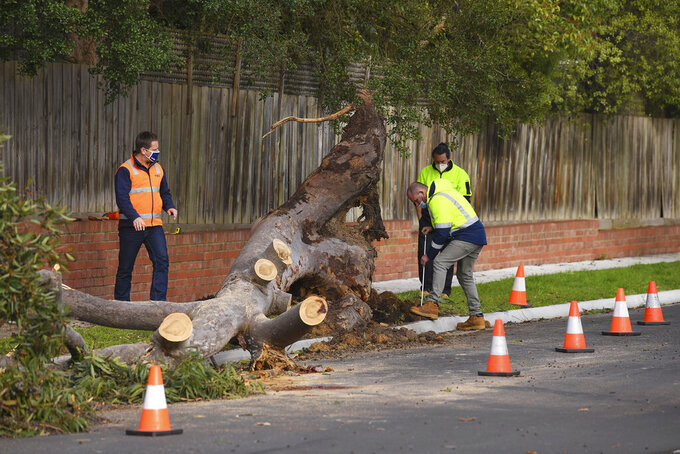 Men work on removing a fallen tree, Friday, Aug. 28, 2020, which struck and killed a 4-year-old boy in Melbourne, Australia. Three people were killed by falling trees and 50,000 homes were left without power after a wild storm Thursday. (James Ross/AAP Image via AP)

A 4-year-old boy was struck by a tree Thursday evening and died later in hospital, police said, as Melbourne was lashed by wind speeds up to 158 kph (98 mph).

A 59-year-old man was killed when a falling tree crushed the car he was driving. And another tree truck a pickup truck on a highway, killing a 36-year-old woman passenger. The 24-year-old male driver was taken to hospital with minor injuries, officials said.

Around 56,000 homes lost power, Victoria state Premier Daniel Andrews said. Power was expected to be restored to all by Friday afternoon.

The power failure caused disruptions at a water purification plant. Residents in 88 of Melbourne's 523 suburbs were advised to boil their drinking water until further notice.

Melbourne is Australia's coronavirus hot spot and is under lockdown for six weeks.

Andrews said restrictions would be relaxed so that residents could respond to the storm's aftermath.

“We know and understand this is unique and we don’t want those coronavirus rules to make it any harder, but we just have to find that balance point and I am confident that we can,” Andrews said.