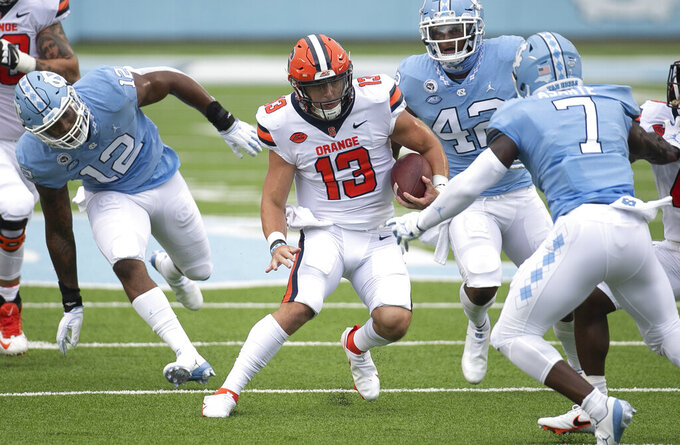 CHAPEL HILL, N.C. (AP) — North Carolina opened a high-expectation season with a fast start and a strong finish, sandwiched around a run of mistake-filled play. And all of it came amid the unusual backdrop of section after section of empty seats.

Javonte Williams ran for three fourth-quarter touchdowns to help the 18th-ranked Tar Heels pull away and beat Syracuse 31-6 on Saturday, winning in an empty home stadium after the school opted to open with no fans in attendance due to the coronavirus pandemic.

After a game-opening touchdown drive, the Tar Heels (1-0, 1-0 Atlantic Coast Conference) sputtered with turnovers and penalties before ultimately settling into a rhythm to look like the team expected to be a contender in the ACC race.

“I thought we probably scored too quickly and felt like it was going to be an easy day, and then had some lapses against a new defense,” coach Mack Brown said, adding: "We settled down (after halftime) and became the offense that we thought we wanted to be coming into the ballgame.”

By the fourth quarter, they were rolling, with Williams capping his hat trick by bouncing off a tackler on a 6-yard scoring run that helped the Tar Heels turn a 10-6 lead into a 25-point margin.

“I think this game really helped us because it showed us football is and we got back in our groove,” Williams said.

Syracuse’s offense did little well, generating little from its running game unless it came on quarterback Tommy DeVito scrambling to keep plays alive. But DeVito completed just 13 of 31 passes for 112 yards while taking seven sacks, as the Orange (0-1, 0-1) finished with 202 yards.

“The bottom line is they had a convincing win over us,” Orange coach Dino Babers said. “We’ve got an idea of where we’re at now. I still think we’re good. Now we need to go back and work on some things and bring some other people along.”

Syracuse: The move to a 3-3-5 scheme under new defensive coordinator Tony White has some good moments, including when preseason Associated Press All-American Andre Cisco picked off Sam Howell when the UNC sophomore threw into double coverage. But the offensive line that left DeVito battered all last season again had him taking a lot of punishment in this one.

UNC: The Tar Heels have enjoyed a lot of preseason hype. But UNC gave Brown, a College Football Hall of Fame member, plenty to address going forward with three turnovers and nine penalties for 91 yards.

“We were killing drives with one play, one mistake,” Howell said.

The Tar Heels didn't do much to impress voters in the AP Top 25 until late in this one. But they could move up considering teams ranked ahead of them in the preseason poll but aren’t playing this fall won’t be eligible beginning with the first regular-season poll Sunday.

HAPPY TO BE HERE

Brown has been publicly lobbying for health officials to allow an exception to restrictions limiting gatherings so that players' family members could attend. He said the team ultimately was able to distribute 25 tickets to seniors, but otherwise, the 50,000-seat Kenan Stadium was empty except for cutouts of fans in two sections.

“At first I thought it was going to be kind of weird, not having fans in the stadium,” Williams said. “But once the game started, we kind of just drowned it out.”

Brown even addressed his team on the field after the game instead of going to the locker room.

As for Babers, he was good just with playing, period.

“We’re playing football in the ACC, we’re going to get better and we’re excited.”

UNC players wore a patch designed by linebacker Tomon Fox to raise awareness of social-justice issues, bearing the image of a fist surrounded by messages such as “Say Their Names."

Syracuse team spokesman Tyler Cady said six players “Equality” and one had “Black Lives Matter” on the back of their jersey instead of names.

Michael Carter added 138 yards of total offense for UNC, which opened the season with an ACC win for the first time since beating Clemson 45-0 in 1996 from Brown’s first stint as coach. … This was Syracuse’s first visit to Chapel Hill since joining the ACC before the 2013-14 season. The Orange’s last trip here was in 2003. … The 202 yards were the fewest allowed by UNC against an ACC opponents since giving up 198 to Boston College in 2009.

Syracuse: The Orange stays on the road by visiting Pittsburgh next Saturday.