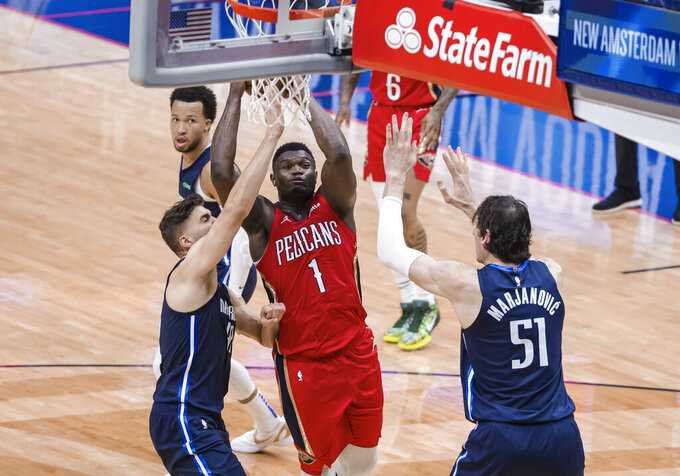 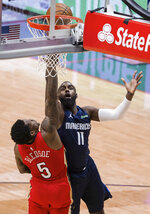 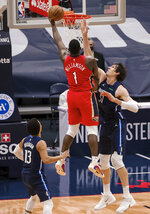 NEW ORLEANS (AP) — The Zion Williamson Express is quickly becoming much more than a trending analogy.

Just ask Dallas coach Rick Carlisle, whose short-handed Mavericks were overpowered by Williamson in the final minutes of a 112-103 victory by the New Orleans Pelicans on Saturday night.

Williamson scored 38 points, including 10 during New Orleans’ 18-8 run in the final 3:42, and Nickiel Alexander-Walker added 20 to lift the Pelicans to the victory.

Williamson, who has flourished in the point forward role given to him in the last several weeks by Pelicans coach Stan Van Gundy, either scored or assisted on the final 14 points by New Orleans, which erased a 95-94 deficit.

“You know, he is just creating collisions out there,” Carlisle said, referring to Williamson’s ability to penetrate through double- and triple-teams to get to the basket. “This is a Shaquille O’Neal-type force of nature with a point guard skill set.

“You’ve got to have a lot of courage to stand in there and get run over by that guy, because he’s coming at you fast. It’s like it’s not just an Amtrak – it’s the (Amtrak) Acela; it’s a fast one. It doesn’t stop at Westport (Connecticut) or wherever. It just goes straight to New York City.”

Coming off a career-high 39 points in a close loss to Denver on Friday night, Williamson continued to roll, scoring 15 points in a 53-53 first half and then closing out with 23 second-half points.

Even though Dallas played without leading scorers Luka Doncic (out due to illness) and Kristap Porzingis (resting a sore knee on the second half of a back-to-back), the Pelicans needed every bit of Williamson’s firepower. He was 13 of 20 from the field, got to the foul line 18 times, making 12, and had five rebounds and six assists in 38 minutes.

In two games against Dallas, Williamson is 27 of 35 from the field, averaging 37 points. Williamson recorded his 23rd consecutive game of at least 20 points, a streak that is second-best in NBA history only to O’Neal.

“I haven’t put much thought into it, but my stepdad trained me to be a point guard and to facilitate the game,” Williamson said. “It’s an honor to be in those categories (with O’Neal), but my main focus right now is to help my team win.

“Honestly, I was just making the reads. If the driving lane was there, I was going to go, but I also used that to my advantage when it came to passing because I’ve got great shooters around me. I made the pass and they executed off of it.”

Dallas led 95-94 with 3:42 left, but in addition to Williamson’s 10 points down the stretch, Alexander-Walker nailed two 3-pointers.

Those 3-pointers were wide-open looks because Williamson drew so much defensive attention, and Alexander-Walker said he was happy to come through considering he had missed an open baseline 3-pointer in the final minutes of the loss to Denver the night before.

“Every read, he’s making the right read,” Alexander-Walker said of Williamson. “And, of course, he’s doing Zion things. At this point in time, we’re not surprised. He’s a great player and very unselfish. He made winning plays tonight.”

The Mavericks were led by Tim Hardaway Jr., who scored 21 of his 30 points in the first half. Van Gundy credited Eric Bledsoe with playing tight defense against Hardaway in the second half to cool him off.

Mavericks: After missing Friday night’s 109-94 loss to Indiana with back soreness, Doncic missed the game against the Pelicans with an illness Carlisle said was not related to COVID-19. “He just wasn’t feeling well. We sent him back to the hotel,” Carlisle said. “We always certainly hope it’s not serious. We don’t believe it is.” ... Porzingis was held out to rest his knees. “We just feel it’s the best thing for the team and for him,” Carlisle said. “I’m talking of the big picture of the season.” ... Dallas trailed after the first quarter for the 10th consecutive game. They have gone 5-5 in those games.

Mavericks: At Oklahoma City on Monday.

Pelicans: At Boston on Monday.