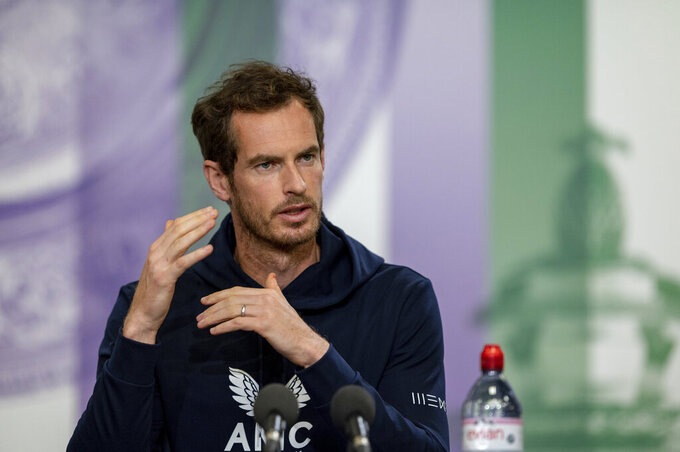 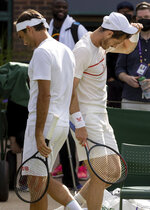 WIMBLEDON, England (AP) — This is what went through Andy Murray's mind while catching some of Novak Djokovic's French Open semifinal clash with Rafael Nadal on TV:

“There’s a bit of me that’s jealous watching that. Like, I would love to be playing in those matches," Murray said recently. "I would love to still be competing with them in semis and stuff of Slams. I would love that. I'm not going to try to hide that.”

And that is at least part of why the 34-year-old from Scotland stuck with his sport after two hip operations and is back at Wimbledon, where play begins Monday after being canceled in 2020, ready to compete in singles for the first time since 2017 at the place where he won two of his three Grand Slam titles.

“Some of it is deep-rooted. It’s just been something that I’ve done my whole life. So, yeah, letting go of that obviously would be a difficult thing to do," said Murray, whose 2013 championship at the All England Club made him the first British man to win the grass-court tournament in 77 years. "I also miss being on Centre Court, things like that. I miss that. I miss the pressure of that, as well. That’s something I’m looking forward to feeling that again.”

The former No. 1-ranked man returned to action at the Queen's Club tuneup after going three months between singles matches and is currently outside the Top 100, so he needed a wild-card invitation to enter the main draw.

Murray is scheduled to play on Centre Court on Day 1, facing No. 24 seed Nikoloz Basilashvili.

As part of his preparation, Murray practiced with Roger Federer last week.

“It was very nice sharing the court again with Andy. We were trying to think when the last time was when we shared a practice court together,” Federer said. “I thought he looked good. To be honest, you can see how comfortable he is on the grass. Clearly it’s just practice, we’re trying things. But I hope he can go deep here, have a nice run.”

Here's what else to know about the 134th edition of Wimbledon:

The last time Wimbledon was held, Coco Gauff announced herself to the world.

Then 15 and ranked outside the Top 300, the American became the youngest qualifier in tournament history to earn the chance to make her Grand Slam debut and, as if that weren't enough, went on to beat Venus Williams and two other players before losing to eventual champion Simona Halep in the fourth round.

Now 17, Gauff has kept making strides, including two WTA singles titles, an appearance in the French Open quarterfinals this month and a rise up the rankings that allows her to be seeded 20th at Wimbledon.

“I’m excited to go back, for sure,” Gauff said. “It kind of just was the start of my career, I guess, and making it on the pro tour.”

When French Open champion Barbora Krejcikova entered the main interview room at the All England Club for a pre-tournament video conference, she looked around and said, “It's big," then whispered, "Oh, my God.”

These sessions with the media are generally reserved for Grand Slam title winners and contenders, the sorts of players used to the setting. But Krejcikova has never played in the singles main draw at Wimbledon before.

Her title at Roland Garros, where she also won the doubles trophy, came in just her fifth major overall in singles.

“You can actually see that I feel, actually, quite nervous. My voice is — I cannot really put the good words together, because all of this is very new and all of this is really exciting and special,” Krejcikova said. “Also, it’s stressful. I didn’t expect this to happen. Now I’m here.”

A year after calling off its main event because of the pandemic, the All England Club set up what it is calling a “minimized risk environment,” with COVID-19 testing, a “track-and-trace program" and the requirement that players and their entourages stay at a designated hotel in London.

That rule applies even to British players — and their team members — who might normally stay at their own homes or athletes who usually rent private houses in Wimbledon Village.

One player based in England, 27th-seeded Johanna Konta, spoke Saturday about it being “very odd” to drive past her home on the way to Wimbledon — and on Sunday, she was withdrawn from the field because she had been in close contact with a member of her team who tested positive for COVID-19.

While Serena Williams pursues a 24th Grand Slam title and Djokovic a 20th, some other big names in tennis are missing from the brackets.

Among the changes to the oldest Grand Slam tournament, which was first contested in 1877:

— A serve clock has been added for matches, aligning Wimbledon with the other major tournaments, which allow 25 seconds from when the chair umpire announces the score to when the next point should begin.

— The pre-match warmup is being reduced from five minutes to four.

— All courts have the electronic replay review system that allows players to challenge calls; the system was added to Courts 4-11. There still will be people making the initial calls, though: While the 2021 Australian Open and U.S. Open did away with line judges, Wimbledon did not.

— This is Wimbledon's last year with the traditional Middle Sunday off. When competition is added on that day in 2022, it will turn what is currently the only 13-day Grand Slam tournament into a 14-day event, like the U.S. Open and Australian Open (the French Open lasts 15 days).