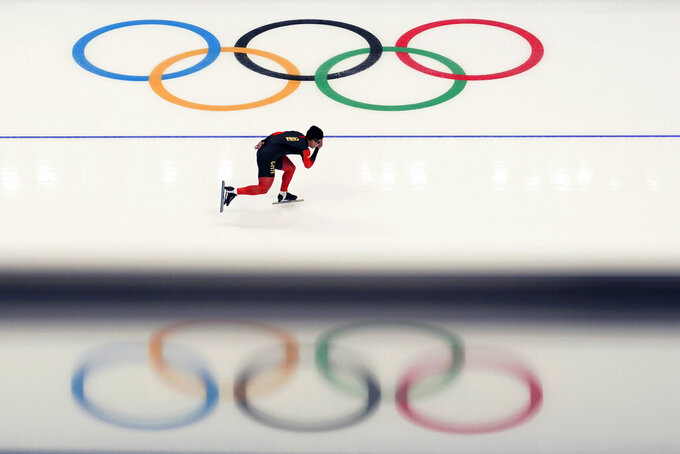 FILE - A Chinese athlete warms up before the start of the men's speedskating 1,500-meter race at the 2022 Winter Olympics, Tuesday, Feb. 8, 2022, in Beijing. o hear the world’s Olympic leaders tell it, the bidding for future Winter Games has been jumbled by internal disputes at India’s Olympic committee, a newfound affinity for streamlining the bidding process and, most recently, a long-overdue nod to the impact of climate change. (AP Photo/Ashley Landis, File)

To hear the world's Olympic leaders tell it, the bidding for future Winter Games has been jumbled by internal disputes at India's Olympic committee, a newfound affinity for streamlining the bidding process and, most recently, a long-overdue nod to the impact of climate change.

Left unsaid might be the biggest reason of all: It's becoming nearly impossible to find any place, outside of Salt Lake City, that truly wants to host these events.

It's a reality that has been building for decades, and one the IOC said could reach a tipping point soon, when its Olympic Games executive director, Christophe Dubi, raised the idea at a meeting last week that the narrow list of eligible cities could be narrowed further by the realities of a warming planet with fewer mountain towns that can realistically host the Games.

That, in turn, leads to the idea that the Olympics could someday be rotated between a handful of cities — an idea that long has been floated for both summer and winter as the bloated budgets and overbuilt infrastructure of Olympic hosts becomes as inevitable as the lighting of the flame.

“No conclusion has been reached yet, as this needs further debate,” Dubi said.

For now, the plan appears to be to award the Games for 2030 and 2034 at the same time, much the way the IOC awarded Paris and Los Angeles the 2024 and 2028 Summer Games simultaneously five years ago while facing a similarly shrinking pool of potential bidders.

When the dual award for the upcoming Winter Games might be come is TBD. (The 2026 Olympics will be held in Italy.) They were supposed to be decided at next year's IOC meeting in India, but that get-together has been postponed indefinitely due to fractures inside the country's Olympic committee that must be healed before the IOC will commit to a date.

The postponement gave the IOC a convenient reason to hold off on the decision.

Among the three cities that have put forth serious proposals to host, only Salt Lake City's bid appears ready. Earlier this year, the provincial government in British Columbia delivered a near-death blow to a bid in Vancouver, saying the $1.2 billion in public funding needed was too big a bill. And Sapporo, Japan, is still in the mix, though questions persist about public support to bring an Olympics back to that country so soon after the COVID-19-delayed and corruption-tainted Summer Games held in 2021.

If the IOC has its way, it would lock in Sapporo and Salt Lake as soon as possible, then try to figure out next steps, which would presumably include finding a European town or two that would be willing to get into the mix.

“The way it was presented, is saying by a double allocation, we would win some time to then establish a sound rotation system," IOC President Thomas Bach said of the process explained to IOC executives by Dubi's organizing group.

It's conceivable that one host in a far-off rotational system could come from Asia, even though the last three Winter Games have been held on that continent in a twist that underscored the weakness of the franchise.

First, the time zone made it a ratings killer in the West, where NBC pays big bucks to televise the Games in the United States. Second, two of those Olympics were held in authoritarian countries, Russia and China. Those countries essentially produced blank checks (more than $50 billion for Sochi; unknown for Beijing) and zero moral compass (Russia spawned an international doping crisis, while China used the COVID-19 pandemic as a rationale to be even more opaque than usual) to produce Olympics that came off as less-than-satisfying for many participants and viewers. Would the IOC have the stomach to make those countries permanent hosting partners?

Also, there were only two bidders for 2022 — China and Kazakhstan — which left the IOC dealing with the embarrassing reality that no one in the West wants to do this anymore.

Except, it seems, for Salt Lake City.

The rotation system — something many Olympic watchers feel is long overdue — could be an easier sell for the Winter Games due to climate change. Though much was made of this year's Olympics being held entirely on fake snow, snowmaking has long been a staple of Winter Games not only because there isn't enough of the real stuff, but because it is easier to shape and form into ski and snowboard courses.

More relevant is a recent study in “Current Issues in Tourism” that projected that without a dramatic reduction of global emissions of greenhouse gases, only one of the previous 21 Winter Olympics sites would be able to reliably provide fair and safe conditions by the end of this century.

“To take a pause in the process to have that greater conversation, to look at the research and to see how it is affecting the movement on the winter side, as well as the summer side, is an important step for what they’re doing at this point,” said the chair of the Salt Lake bid, Catherine Raney-Norman.

Leaders at the U.S. Olympic and Paralympic Committee welcomed the IOC debate about a possible new format. Though Lake Placid and Denver occasionally get serious about getting into the hosting business, CEO Sarah Hirshland left no doubt about Salt Lake City's standing in that conversation.

“We all collectively had a smile on our faces as we came out of that news," Hirshland said. “It is a region and a part of the country that will always be ready to host these Games.”

The bigger question is — who else is?

In Europe, Stockholm and Barcelona are among those that have gotten in, then out, of the bidding game in recent cycles. Given the recent trends in international sports hosting, it's wise to keep an open mind. Saudi Arabia recently won rights to stage the 2029 Asian Winter Games. It is spending $500 billion to build a winter wonderland that the host claims will be carbon neutral but that has received scorn and ridicule from nearly every other corner of the globe.

The IOC said it was never consulted about that arrangement and that its priorities are sustainability and reducing costs. Which sounds like a “No” when what it really needs are a few more places to say “Yes.”