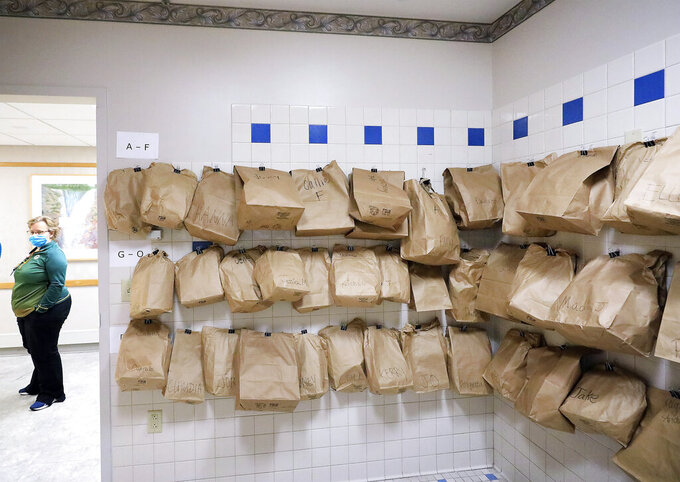 FILE - Bags of personal protective equipment for staff attending to patients in a COVID-19 treatment unit at UW Health in Madison, Wis. share a wall Thursday, Nov. 5, 2020. Faulting inaction in Washington, governors and state lawmakers are racing to get needed pandemic relief to small businesses, the unemployed, renters and others affected by the widening coronavirus outbreak. In some cases, they are figuring out how to spend the last of a federal relief package passed in the spring as an end-of-year deadline approaches and the current COVID-19 surge threatens their economies once again. (John Hart/Wisconsin State Journal via AP)

MADISON, Wis. (AP) — The number of confirmed COVID-19 infections in Wisconsin continued to tick downward Wednesday, a rare bit of good news for health officials as they struggle to contain the deadly disease.

The state Department of Health Services reported 5,469 confirmed cases Wednesday. The number of confirmed cases has now declined for five days, an encouraging sign after the state saw a record-high 7,989 cases on Nov. 18.

What's more, the seven-day average of positive tests was 28.3% as of Tuesday, continuing a downward trend from a record-high 36.6% on Nov. 11.

But the disease is still running rampant across the state.

According to DHS, the total number of confirmed infections stood at 369,442 as of Wednesday. The disease was a factor in 63 more deaths, bringing the death toll to 3,178, according to the department. Wisconsin remains sixth in the nation in per capita infections, according to Johns Hopkins University.

And any progress against the disease appears fleeting. Health officials are bracing for another surge in infections and deaths stemming from Thanksgiving gatherings.

Meanwhile Wednesday, the conservative-leaning state Supreme Court decided to take a lawsuit seeking to block a Racine Public Health Department order that would close schools effective Friday. The court issued a temporary injunction blocking the order while it weighs the merits of the case, which means schools can remain open. School choice supporters filed the lawsuit directly with the high court.

Conservatives have with great success repeatedly asked the Supreme Court to kill orders designed to slow the disease's spread since the pandemic began in March.

The justices in May erased Gov. Tony Evers' stay-at-home order and in September blocked a Dane County order prohibiting most students from attending school in-person. The court is currently weighing whether to strike down Evers' capacity restrictions on bars and restaurants and his statewide mask mandate. It's also deciding whether to accept a lawsuit challenging Dane County's ban on indoor gatherings and indoor sports.

Justice Rebecca Dallet, a member of the court's liberal-leaning minority, cited language from a previous decision in a separate case when she wrote in dissent to the Racine injunction. She said conservatives are treating the court like a “performing bear.”

“The majority's frequent exercise of original action and injunctive authority," Dallet wrote, “has transformed the court into the preferred forum for Wisconsinites to second-guess public health policy choices.”