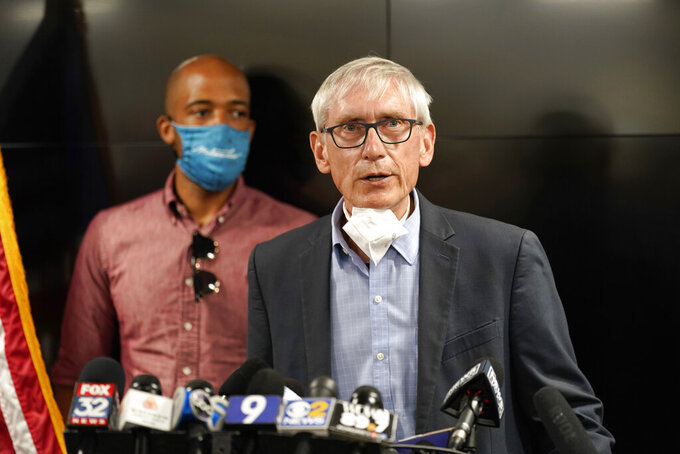 FILE - In this Aug. 27, 2020, file photo, Wisconsin Gov. Tony Evers speaks during a news conference in Kenosha, Wis., as Lt. Gov. Mandela Barnes, left, accompanies him. Gov. Evers made it official Saturday, June 5, 2021, announcing his bid for a second term in the battleground state where he stands as a Democratic block to the Republican-controlled state Legislature. (AP Photo/Morry Gash, File)

Evers officially announced his plans to seek a second term during his address Saturday and the five announced Democratic candidates vying to take on Johnson will speak on Sunday. Johnson has yet to say whether he will seek a third term.

But for the Democrats speaking to the party faithful on Saturday, he was the clear target.

Johnson has echoed former President Donald Trump's unfounded claims of election fraud, calling for investigation into unfounded claims of voter fraud, and also been an outspoken critic of the response to the coronavirus pandemic, the need to be vaccinated and mask requirements.

President Joe Biden, in brief recorded comments for the convention, said, "Nothing in this country is more sacred than the right to vote.”

Evers said the 2022 election was about protecting his veto power against the Republican-controlled Legislature, which is pushing election law changes to make it more difficult to vote absentee, and defeating Johnson.

“So, holy mackerel, we’re going to need your help to get it done again in 2022,” Evers said in a recorded message. “Because here’s the deal, folks — the stakes are just too damn high. Look around — we know what we’re up against.”

“We’re up against a Republican Party that poses an existential threat to the survival of our democracy," said Democratic U.S. Rep. Ron Kind, who represents western Wisconsin's 3rd Congressional District, a top target for Republicans in 2022. Republican Derrick Van Orden, who lost to Kind by less than 3 points in 2020, is running against him again.

Attorney General Josh Kaul said Republicans who want to change election laws want to take power away from voters and give it to elected officials. Kaul called that a threat to American democracy and “fundamentally anti-democratic.”

Pocan also had a cautionary word for the Democrats running for the Senate seat.

“The person we are trying to beat is Ron Johnson, not each other,” he said. Pocan urged the candidates, like he said the gubernatorial candidates did in 2018, to run on ideas and not attack one another.

Lt. Gov. Mandela Barnes, who is considering a run for Senate, hedged his bets on Saturday, saying he would work next year to both reelect Evers and defeat Johnson, without saying what office he would be running for.

The keynote speaker, former Housing and Urban Development Secretary Julian Castro, said the entire country would be watching Wisconsin closely. In an interview prior to his speech, Castro said the governor and Senate race put Wisconsin at the center of the political fights nationally in 2022.

They also called on the activists who were watching the convention to donate as much money as possible for the 2022 races.

“We need some of y’all to max out, and you know who you are," said U.S. Rep. Gwen Moore, in a candid appeal to the wealthiest donors to give as much as legally allowed.

A tracker on the Democratic Party's convention website showed around 400 people watching at any given time. People could also watch it on other platforms, so it's unclear how many people actually saw it.