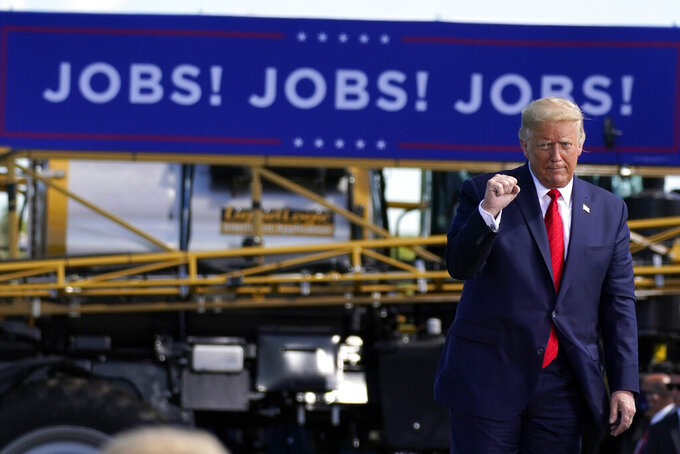 MADISON, Wis. (AP) — Wisconsin Democrats marked the start of the Democratic National Convention on Monday by blaming President Donald Trump for botching the response to the coronavirus pandemic, which they said forced them to cancel the in-person gathering that would have brought about 50,000 people to Milwaukee.

Instead, when the convention officially starts on Monday night, the event will be delivered virtually, with speakers offering prerecorded or live comments delivered online. Wisconsin Democrats tried to put a positive spin on the situation during an online “Welcome to Wisconsin” convention kick-off event Monday morning.

“We have been dealt a rough set of cards," Milwaukee Mayor Tom Barrett said from his home. He noted the beautiful weather that would have greeted delegates had the convention gone off as planned.

“I wish you were here spending all of your money, but you can come back any time," Barrett said. "We will leave the lights on.”

Trump's failure to adequately respond to the pandemic is why Democrats had to move to an all-virtual event, said Wisconsin Democratic Party Chairman Ben Wikler.

“It’s sad that Wisconsin Democrats are lying to voters to try and bury the fact that Joe Biden has abandoned Wisconsin,” Kelly said.

Hoping to draw attention from the Democratic convention and to highlight Biden's decision not to travel to Wisconsin, Trump and others close to him planned to appear at events around the state. Trump is scheduled to hold an outdoor rally in Oshkosh on Monday afternoon, his son Eric Trump is to be in Milwaukee on Tuesday, and Vice President Mike Pence will appear Wednesday in Darien, which is in southeastern Wisconsin near the Illinois border.

Democratic Sen. Tammy Baldwin criticized the Republicans' in-person visits amid the pandemic, saying Democrats were protecting the health of safety of convention attendees by holding an all-virtual event.

“They’re unsafe because they are holding in-person events,” Baldwin said of Trump, his son and Pence. “I don’t know if they will be wearing masks, I hope they follow the mask guidelines we have in our state.”

Democratic Gov. Tony Evers issued a statewide mask mandate that took effect Aug 1. Republicans have tried to contrast the in-person visits by Trump and others this week with presumptive nominee Joe Biden choosing to skip the convention in Milwaukee and instead deliver his acceptance speech remotely from his home state of Delaware. Republicans paid for a digital billboard in Milwaukee that asks, “Where's Joe?"

Evers and others who spoke during the morning welcome event contrasted Biden's approach to the pandemic with that of Trump. Evers called Biden a “good man” who will lead with kindness, compassion and empathy.