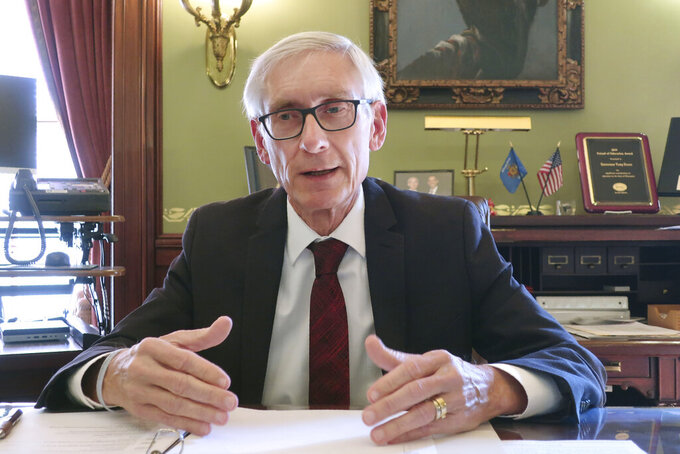 FILE- In this Dec. 4, 2019 file photo, Wisconsin Gov. Tony Evers speaks in his Statehouse office in Madison, Wis. Gov. Evers on Thursday, July 30, 2020, issued a statewide mask mandate amid a spike in coronavirus cases, setting up a conflict with Republican legislative leaders who oppose such a requirement and successfully sued earlier to kill a "safer at home" order. Evers declared a new public health emergency, after his initial one expired in May, and ordered the wearing of masks for anyone age 5 and up starting on Saturday for all enclosed spaces except a person's home. (AP Photo/Scott Bauer,File)

MADISON, Wis. (AP) — Wisconsin Gov. Tony Evers on Thursday issued a statewide mask mandate amid a spike in coronavirus cases, setting up a conflict with Republican legislative leaders who oppose such a requirement and successfully sued to kill the governor's "safer at home” order.

Evers, a Democrat, declared a new public health emergency and ordered the wearing of masks for anyone age 5 and up starting on Saturday for all enclosed spaces except a person’s home. The new order also applies to outdoor bars and restaurants, except when people are eating or drinking.

Anyone who violates the order would be subject to a $200 fine. It is scheduled to run until Sept. 28.

“This virus doesn’t care about any town, city, or county boundary, and we need a statewide approach to get Wisconsin back on track,” Evers said in a statement, citing the recent rise in cases across the state. “We’ve said all along that we’re going to let science and public health experts be our guide in responding to this pandemic, and we know that masks and face coverings will save lives.”

The conservative-controlled Wisconsin Supreme Court in May tossed out an order from Evers’ health secretary closing most nonessential businesses in an attempt to slow the spread of the virus. Republican state Sen. Steve Nass, one of the Legislature's most conservative members, called for lawmakers to meet in an emergency session to kill the order, which he called “illegal and unnecessary.”

Republican Assembly Speaker Robin Vos said he opposes a statewide mandate, but he indicated that he wouldn't sue to stop it like he did the “safer at home” order.

“There are certainly constitutional questions here,” Vos said. "I would expect legal challenges from citizen groups.”

Vos did not say whether the Legislature would reconvene to kill the order.

Evers has repeatedly cited the earlier Supreme Court ruling as a reason for his reluctance to join 32 other states that have mask mandates. However, the May ruling determined that the state health secretary overstepped her authority with the “safer at home” order; the court did not address the governor’s power to issue public health emergencies.

The state’s high court was controlled 5-2 by conservatives when it struck down the earlier order on a split 4-3 decision. But on Saturday, when the mask order takes effect, Justice-elect Jill Karofsky will join the court, narrowing the conservative majority to 4-3 and increasing the odds of the order surviving a legal challenge.

Evers said the rise in COVID-19 cases, not Karofsky's joining the court, and the fact that not enough people wore masks voluntarily motivated him to act now. Evers had been under pressure from local governments, and even some Democrats, to issue a statewide order. Democratic state Sen. Chris Larson, of Milwaukee, started a petition for a statewide mandate.

“The bottom line is we need to keep people safe and this is one way to do it," he said. "We hope the Supreme Court agrees with us. You never know, it may never end up in the Supreme Court.”

Absent a statewide mask order, cities and counties across the state have been taking action on their own. Milwaukee and Dane counties, with Wisconsin’s largest cities of Milwaukee and Madison, were the first to make masks mandatory. Numerous other cities, including Green Bay, Racine, Superior and Whitewater, have followed suit. Appleton this week recommended that people wear masks, but did not require it.

Wisconsin has had more than 52,000 confirmed cases of COVID-19 and 919 deaths from the disease since the pandemic started. That death count is the 28th-highest in the country and the 35th highest per capita, at nearly 16 deaths per 100,000 people. Over the past two weeks, the rolling average number of daily new cases has gone up by 90, an increase of more than 11%.

The virus, although still heavily concentrated in urban areas, is spreading to more rural counties that had largely avoided the disease.