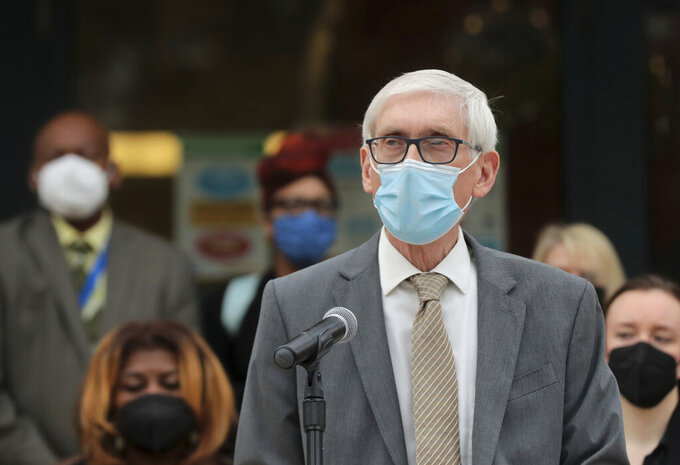 FILE - Wisconsin Gov. Tony Evers speaks during a news conference outside Henderson Elementary School in Madison, Wis. Thursday, April 29, 2021. Unemployed people in Wisconsin would lose a $300-a-week federal bonus under a Republican-backed bill the GOP-controlled state Legislature plans to pass on Wednesday, June 9, 2021. However, Evers, a Democrat, has signaled that he will veto the proposal. (John Hart/Wisconsin State Journal via AP, File)

The federal payment, approved to help the unemployed during the coronavirus pandemic, is scheduled to end on Sept. 6. Twenty-five other states have already approved ending it early, saying it has exacerbated worker shortage problems.

That's the argument that Republicans, state and local chambers of commerce, trade groups and others made for for passing the bill in Wisconsin.

“Do you believe we should help the small business community?” Vos said. “Work should be what pays, not waiting for a government paycheck.

Democratic Assembly Minority Leader Gordon Hintz countered that unemployment is lower now than a year ago during as the pandemic was raging. Wisconsin’s unemployment rate this past April was 3.9%. In April 2020 it was 14.1%

The problem is Republican policies have driven workers out of the state over the last decade, Hintz said.

“You’ve made our state worse. People don’t want to live here,” he said. “This vote doesn’t address your problems.”

Labor experts say the labor shortage is not just about the $300 payment. Some unemployed people have been reluctant to return to work because they fear catching the virus. Others have found new occupations. And many women, especially working mothers, have left the workforce to care for their children.

The bill passed both the Senate and Assembly on party line votes, with all Republicans in support and Democrats against.

Evers last week voiced support for the $300 payment, saying those who advocate abolishing it don’t have any evidence that it’s behind the worker shortages.

The payment comes on top of Wisconsin's weekly $370 unemployment benefit.