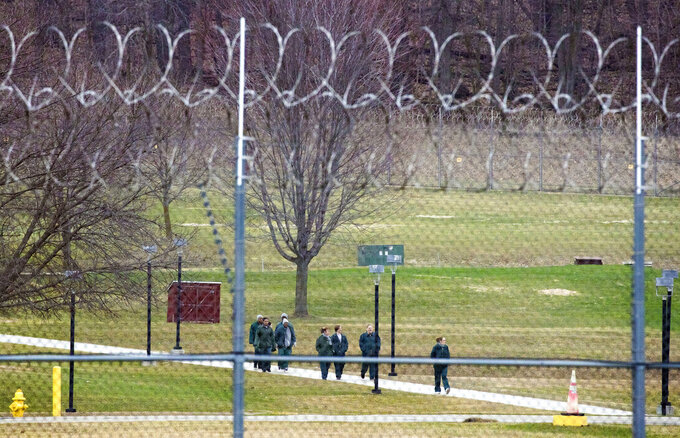 FILE - In this March 31, 2020, file photo, female inmates walk a path at the Taycheedah Correctional Institution in Fond du Lac, Wis. The number of inmates in Wisconsin's prisons dropped dramatically last year as the COVID-19 pandemic took hold, declining to levels not seen in more than 20 years, according to a report the Wisconsin Policy Forum released Thursday, March 25, 2021. (Mark Hoffman/Milwaukee Journal-Sentinel via AP)

MADISON, Wis. (AP) — The number of inmates in Wisconsin's prisons dropped dramatically last year as the COVID-19 pandemic took hold, declining to levels not seen in more than 20 years, according to a report released Thursday by the Wisconsin Policy Forum.

The number of inmates in county jails also declined. The average daily jail population fell 35% between April 2019 and April 2020, from 12,871 to 8,338. Jails in 18 counties saw their population decline by at least half. The drop in jail inmates was immediate, declining by 3,832 inmates between February and April 2020. The decline mirrored a decrease in the number of jail inmates nationwide.

The report attributed the declines to tactics designed to slow COVID-19.

Gov. Tony Evers issued an emergency order blocking all new admissions to state prisons in March 2020. As of mid-February of this year, about 1,250 male inmates sentenced to prison had still not been transferred from jail. Courts also slowed the pace of trials and fewer people have had their extended supervision revoked.

On the jail side, the report said a large number of prisoners were released from detention to slow the spread of the disease and placed on electronic monitoring or some other form of supervision. Milwaukee County, which routinely holds more than double the average daily population of any other county, limited jail admissions to exclude people charged with misdemeanor crimes and increased electronic monitoring as an alternative for inmates granted work-release privileges.

The report found the number of jail inmates ticked upward in the second half of 2020, perhaps reflecting an increase in gun violence and homicides as well as a backlog in trials and prison transfers.

Spending figures for 2020 aren't available yet, the report said, but spending likely didn't dip to match population declines since jails and prisons probably weren't able to reduce staff at nearly the same rate.

Evers' budget calls for expanding the state's earned release program, allowing judges to reduce extended supervision portions of sentences and allowing inmates jailed for violating the terms of their extended supervision work-release privileges. The governor's spending plan also would remove the felony penalty for bail jumping and create an equity officer to study how government practices impact communities of color.

It's unclear how much of the Democratic governor's budget will survive revisions by Republican legislators. GOP leaders have been talking about scrapping Evers' spending plan and writing their own from scratch.