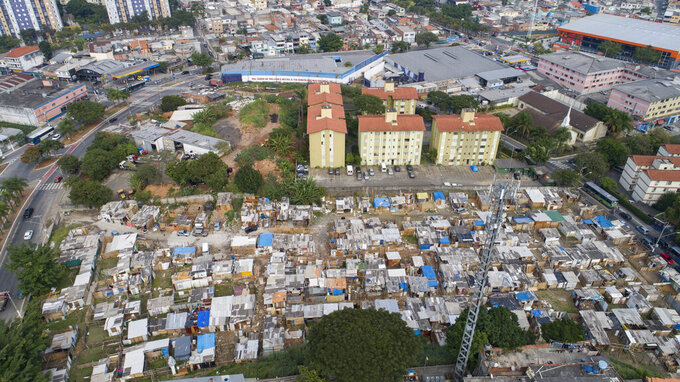 FILE - This May 15, 2021 file photo shows an aerial view of the Penha Brasil favela where families have started relocating during the coronavirus pandemic in Sao Paulo, Brazil. The pandemic shantytown sprang up virtually overnight when people began using scavenged wooden boards to build shacks on a plot of empty land in Sao Paulo, Brazil's biggest city. (AP Photo/Andre Penner, File)

Geovani de Souza and his pregnant wife were among the 200 families who moved in over the last six months amid the economic turmoil caused by COVID-19.

“Without a job, I couldn’t pay my rent, was evicted from where I was living and found the solution here,” said de Souza, who now relies on occasional work as a bricklayer. Similar stories abound.

The Penha Brasil shantytown's rapid creation reflects a resurgence in poverty after the government limited socioeconomic turmoil in 2020 with one of the world's most generous welfare programs. Now that flow of money has been curtailed, leaving vulnerable Brazilians exposed to soaring food prices and a still-worsening job market. And the strain comes at a time when there is no near-term hope of mass vaccination to safeguard the labor force.

“Government welfare will be less, and a recovery process is harder because of the pandemic and slow vaccination,” said Sérgio Vale, chief economist at Sao Paulo-based consultancy MB Associates. “People are poorer, have more expensive bills and more expensive food. ... It will be difficult to survive.”

Last year, Brazil’s government provided payments totaling almost 300 billion reais ($55 billion) that reached 68 million people, about a third of the population. The money buoyed economic activity as President Jair Bolsonaro denounced restrictions aimed at containing the pandemic. Brazil’s recession, which shrank the economy by 4.1%, was smaller than countries in the same region, where some economies sank by twice as much.

But the federal government withdrew the welfare lifeline at the end of the year, prioritizing beleaguered public finances and failing to anticipate the brutal COVID-19 tsunami that materialized in January. Welfare resumed in April, but for roughly two-thirds as many people. They are also receiving less than half the previous monthly amounts.

Brazil’s job market has cratered, along with those of other Latin American economies with many informal workers, according to an international comparison published May 14 by the government’s economic research institute.

In the three months through February, Brazil’s underutilization rate — comprised of unemployed workers, people working few hours and potential workers outside the labor force — climbed to 29.2%, the highest level for that period since 2012, according to the national statistics institute. It includes 14.4% unemployment, which Vale forecasts will climb further still.

Poverty — defined as households living on less than one minimum wage — spiked in the first quarter of 2021 to its highest level in at least nine years, after plunging last year, according to Marcelo Neri, director of the Getulio Vargas Foundation's social policy center.

Food insecurity for people with informal jobs is quadruple that of salaried employees, according to Tereza Campello, a former minister of social development.

“That showed how precarious labor has become since Brazil removed a lot of protections,” Campello said. “Even those who do some work and are more exposed to the virus live in a situation almost as bad as being unemployed.”

As incomes fall, prices are surging, which means the disadvantaged are doubly squeezed. Inflation is climbing at its fastest pace since 2016 — 6.8%. Over the past 12 months, the cost of staple foods like manioc rose 18%, rice 57% and beans as much as 51%.

Residents of favelas, or slums, have accepted food kits from nonprofits like Rio de Paz. Its founder, Antônio Carlos Costa, said some recipients weep with gratitude.

Vania Heleno dos Reis, 52, said welfare last year enabled her to stop cleaning houses, but she resumed around year's end and has not stopped. She and her husband, Pedro, a handyman, haven't eaten beef for weeks, and instead are eating chicken, eggs, rice and beans.

"Pedro likes to eat a lot in the morning, but now he's also trying to keep it to one bun instead of two so we can save a little for the end of the day,” dos Reis said in a supermarket near Heliopolis, Sao Paulo's biggest favela.

“I wish I could stay home. We just can’t," she added. "I protect myself as much as I can. I know people who died of COVID. But I can’t die of hunger.”

COVID-19’s spread accelerated this year, causing more deaths in the first four months of 2021 than in all of 2020. Nearly 2,000 people are still dying each day — a tally surpassed only by India.

Neighboring countries are reeling, too. The world’s highest weekly death tolls on a per-capita basis are now found in Brazil and five other Latin American and Caribbean nations, according to Our World in Data, an online research site. The regional gross domestic product contracted 7.4% in 2020, marking the worst single year since 1821, when countries were casting off colonial yokes, according to the Inter-American Development Bank.

“In 2019, the region was flying with one broken engine. In 2020, its other engine also took a hit,” the bank's chief economist, Eric Parrado, wrote in a March report. “The challenge we now face is to fly this aircraft to safety, rescue the passengers and prepare for the necessary repairs.”

The region’s well-heeled are flying to the U.S. to get vaccines, leaving the poor at the mercy of local vaccination schedules. Most nations are short of vaccines, but Brazil’s government in particular neglected to chase deals. Instead, it bet big on AstraZeneca and, once supply problems emerged, bought only one backup, the Chinese-manufactured CoronaVac. Local production of both vaccines was temporarily suspended last week amid fresh shortages.

Only in February did Brazil’s government start signing deals with other providers — too late to acquire significant supply until the back half of 2021. Just 8.9% of the population is fully vaccinated.

“The best economic policy today is mass vaccination. We need to quickly vaccinate the population to guarantee safe return to work,” Adolfo Sachsida, Brazil’s economic policy secretary, said at a May 18 press conference.

Vale said people have grown used to not doing what’s necessary to contain the virus’ spread. That means a growing chance of another COVID-19 wave in the third quarter, he said.

Soon after, in early September, the pared-down welfare program will end — unless the government bows to pressure for its extension.

“Everything points to a worsening of the social situation," said Campello, the former social development minister. “Brazil will reach the end of 2021 with a level of inequality we had in the 1990s.”