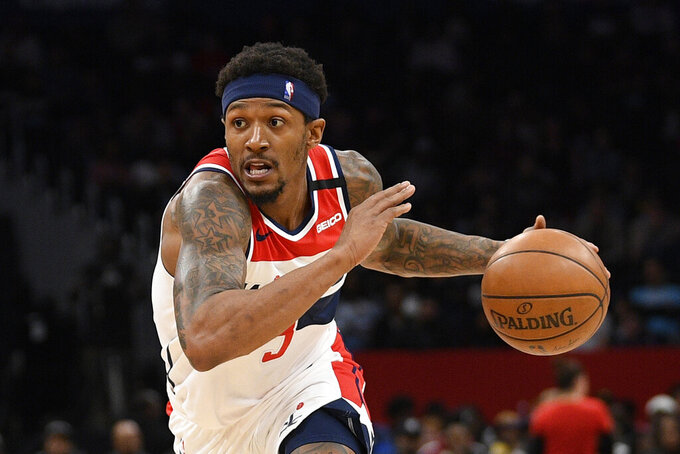 Beal is out because of a right rotator cuff injury; Dinwiddie announced that he is still testing positive for coronavirus and won’t participate.

Washington, Orlando and Brooklyn are the three teams left in the chase for the final two playoff spots in the East. If the Wizards finish within four games of whichever club finishes eighth, then two games will be played to determine the No. 8 seed.

"He’s worked religiously to get this thing back to where it feels right, and it just hasn’t felt right," said Wizards general manager Tommy Sheppard, who doesn't believe Beal's injury will linger long term or require surgery. “To hear him say himself that he’s just not right right now, ‘I’ve got to keep working, I’ve got more work to do,’ made that decision much easier.”

Washington will also be without forward Davis Bertans, who decided to opt out of playing as a pending free agent, and injured guard John Wall. With Beal and Bertans out, a Wizards team that has been without Wall all season will have to replace more than 40 points per game if it is to somehow get into that postseason mix.

"Going to Orlando is very important — it’s a very big opportunity — but would it make sense if we went there and Bradley’s injured?" Sheppard said. “Let’s say our next season starts in December, who’s to say he’s ready for next season? We’re trying to mitigate risk and give him the best opportunity to have a great year next year, which is better for him obviously, for us obviously big picture.”

Beal averaged 30.5 points a game this season, almost twice as much as Bertans, the Wizards' No. 2 scorer. The 27-year-old was preparing to play, even while the decision was up in the air.

“I was loving my game this year and how I was playing towards the end of the year,” Beal said last week. “It’s more or less going to be a decision that comes down to the medical staff and I, just because of our precautions and just coming back from being zero to 100. Then I had some nagging stuff at the end of the year we’re trying to clean up, too."

That team said that was shoulder discomfort Beal experienced early in the season and it worsened over time. The decision to hold him out of play at Walt Disney World was made in consultation with chief of athletic care and performance Daniel Medina, orthopedist Dr. Wiemi Douoguih, Beal and his representatives.

“This was a difficult decision and one that I did not take lightly as the leader of this team,” Beal said in a statement. “I wanted to help my teammates compete for a playoff spot in Orlando but also understand that this will be best for all of us in the long term."

At least six players on the Nets have tested positive for the virus. But Brooklyn general manager said last week there was no discussion of the team not traveling to Florida for the resumption of the NBA season.

“After another positive test yesterday and considering the symptoms, (the Nets), team doctors and I have decided that it would be in the best interest for me and the team that I do not play in Orlando,” Dinwiddie wrote on Twitter. “I will be supporting the guys every step of the way!”

Beal’s absence also all-but clinches the NBA scoring title for Houston’s James Harden, who would be mathematically assured of staying ahead of Beal by scoring a total of 12 points in the seeding games. If Harden sits out any of Houston’s last eight games, that would also be enough to ensure his average — 34.4 points per game — does not fall below Beal.

Beal becomes the second player in NBA history to average at least 30 points in a season where he was not an All-Star. The other was Utah’s Adrian Dantley, who averaged 30.7 points in 1982-83. Dantley appeared in only 22 games that season.