Wolves given FA Cup fright by 6th-tier side before advancing 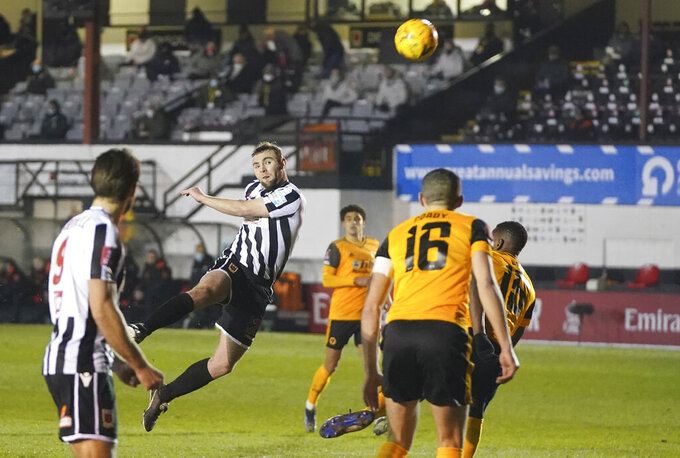 CHORLEY, England (AP) — Separated from Chorley by 109 places in the English football pyramid, Wolverhampton didn't only manage a single goal in its 1-0 win. The Premier League millionaires also only managed a single shot — the goal — against the part-timers from the sixth tier.

Vitinha's 35-yard, swerving strike in the 12th-minute moved Nuno Espírito Santo’s side into the round of 16 in the FA Cup on Friday night. It was spectacular but actually a rare moment of quality from the visitors to this tiny stadium in a former mill town in northern England.

Contrast that with the attacking threat from the minnows. Incredibly, John Ruddy from Wolves was the busier of the two goalkeepers — facing five shots on target, including tipping over a header from Andy Halls, who is a personal trainer in his day job.

And it was Wolves having to hang on to avoid being forced into extra team by a disciplined Chorley side that belied its lowly status.

No wonder manager Jamie Vermiglio wasn't just savoring his chance to take on a Premier League side. A primary school headmaster in his day job, Vermiglio felt far from outclassed by his Wolves counterpart.

“I thought were were fantastic — I feel really proud, of course I do,” Vermiglio said. "But I feel disappointed as well and I never thought I would come off the field feeling the way I feel.

“It’s a strange emotion because I feel we have just taken a Premier League team all the way. We were in a game right until the last minute.”

It says a lot about the breadth of English football that the last non-league side remaining in the FA Cup could prove more than a match to a Wolves side that reached the Europa League last-16 last season.

“Credit to Chorley," Nuno said. "They are in the lower divisions but they were organized and had a good striker that fights and was strong in the duels and created problems.

“I felt the scenario was created for a surprise to happen. We spoke about that but the boys were professional and achieved what we wanted. I have been on the other side and played in the lower divisions against big teams, so I know what it meant for Chorley."

This was not a significantly weakened Wolves side, with the starting lineup featuring Fabio Silva — the team’s 40 million euro record-signing.

“I thought we were the better team in the second half,” Chorley forward Connor Hall said. “We had them on the ropes for 10-15 minutes so we can be proud of ourselves. They showed us respect bringing a strong side and we didn’t do ourselves any harm. It is mad. In a couple of days time we will look back with pride.”

Being live on television across Britain and around the world could certainly help some of the players.

“Most of them could step up a level,” Vermiglio said. “There’s no way we could preform like that consistently at that level week in, week out.”

Chorley isn't even top of National League North. It is only ninth in the 22-team standings.

“Cup games get a little bit of something else out of you," Vermiglio said. “They are just 11 people coming up against 11 people and if you are that organized you can stay in a game of football and that’s what we have done.”

The pandemic meant the only fans who got to glimpse this array of Premier League talent were those who perched onto walls next to houses packed into streets around the tiny stadium with one stand.

Neither the fans nor the team know when they will be back in action at Victory Park, with the league suspended due to a tightening of coronavirus restrictions nationally. Warnings to players to social distance — and not finding a way past Wolves, perhaps — meant this game did not end with the club posting a video of the players singing the Adele ballad “Someone Like You.”

That has been the soundtrack to a cup run that saw Chorley eliminate professional league sides Wigan, Peterborough and Derby to get this far and earn around 500,000 pounds ($685,000) — vital income as the club feels the financial impact of the pandemic.

For a community also suffering through lockdowns, the inspiring progress of the town's team has lifted spirits.

“Up and down the country people are struggling and it’s no different in Chorley,” Vermiglio said. "Those players in there have given them something to look forward to and that makes me immensely proud.”