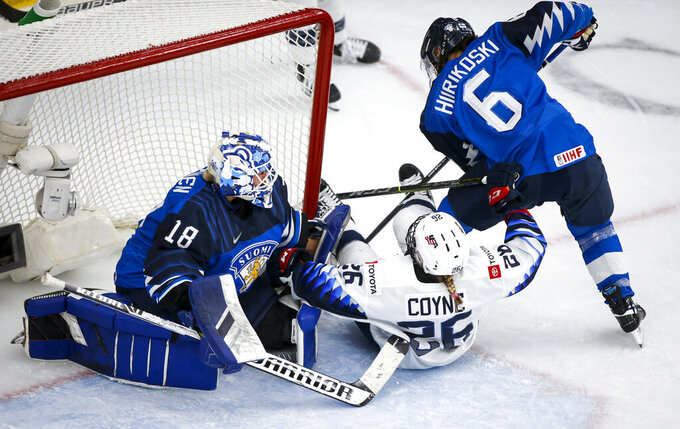 CALGARY, Alberta (AP) — The International Ice Hockey Federation is expected to add a women’s world hockey championship next summer, which will put it in the same calendar year as the Beijing Winter Olympics.

The men play a world championship in an Olympic year but the women currently don’t.

“It was the only championship program within the IIHF, the only category where we had no top tournament in an Olympic year,” IIHF council member Zsuzsanna Kolbenheyer told The Canadian Press.

A world championship in August 2022 would mean three major women’s tournaments in the span of a year after two years of meager international women’s hockey because of the COVID-19 pandemic. The 2021 championship now underway in Calgary comes less than six months before the Winter Olympics in February.

The IIHF council proposes returning the women’s championship to spring in non-Olympic years.

“The more programming we can add to the schedule the better,” American forward Hilary Knight said. “A lot of emphasis is placed on the Olympics, but to have a world championship event during an Olympic year is important.”

Gina Kingsbury, Hockey Canada’s director of national women’s programs who won Olympic gold for her country in 2006 and 2010, is preparing for the schedule shift.

"Having a world championship every year is crucial,” Kingsbury said. "It needs to be strategic in the amount of rest we provide our athletes. We need to think of the athletes first and make sure it fits in their yearly training plan.”

The world championship underway in Calgary is the first in more than two years. The tournament was rescheduled and relocated to the Alberta capital this month because Nova Scotia refused to hold it in May.

“Every opportunity we have to play hockey, and play games, we’ll take it,” Canadian captain Marie-Philip Poulin said. “It’s been a couple long years for women’s hockey to have games, and to play against the best and to play with the best, we’ve been missing that a lot.”