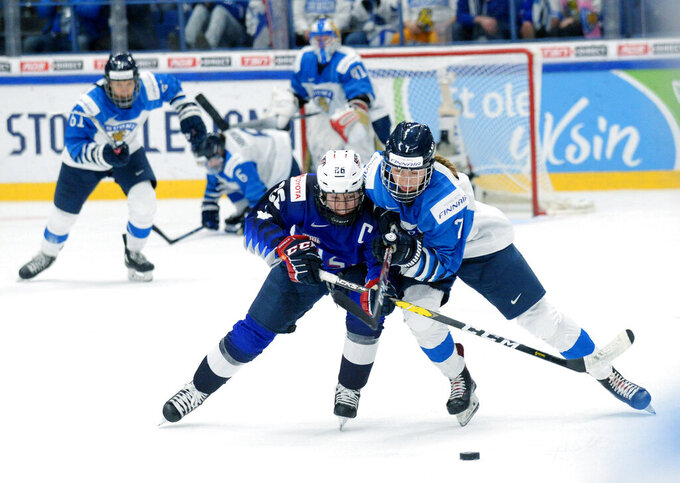 FILE - Kendall Coyne Schofield, left, of the United States and Nelli Laitinen of Finland vie for the puck during the IIHF Women's Ice Hockey World Championships final match between the United States and Finland in Espoo, Finland, in this Sunday, April 14, 2019, file photo. The International Ice Hockey Federation is scrambling to reschedule the women’s world hockey championships after health officials in Nova Scotia, Canada, on Wednesday, April 21, 2021, scrapped holding the tournament next month due to COVID-19 concerns. IIHF chief Rene Fasel told The Associated Press by phone he was blind-sided by the decision, which was made at essentially the last minute. (Mikko Stig/Lehtikuva via AP, File)

The head of the International Ice Hockey Federation on Friday defended the decision to not have an alternative host site for the women's world hockey championship, which was called off this week for the second year in a row.

IIHF President Rene Fasel emphasized that the goal is to reschedule the event for later this year either in Nova Scotia as planned or elsewhere.

Fasel said the IIHF and Hockey Canada were confident the tournament would go ahead until Nova Scotia Premier Iain Rankin pulled the plug Wednesday amid concerns about rising coronavirus cases in the province.

“As both the IIHF and Hockey Canada had assurances that this event was going to proceed a few days before the cancellation announcement, this news was completely unexpected,” Fasel said. Having a backup site for a 10-nation tournament was “just not possible from an expense and logistical perspective.”

Players were stunned. Some were hours from boarding planes to travel to Canada to quarantine ahead of the May 6-16 tournament but instead learned the event was off.

American star Hilary Knight tweeted her frustration Friday, calling the “last minute” move “another reminder that women’s hockey continues to be treated as an afterthought.”

“Wy is women’s hockey not afforded the same opportunity to compete within a bubble environment as the men? Why is our tournament expendable when others are not?” she wrote, adding that the tournament must be rescheduled. “To do anything less hinders the growth of the game globally, and showcases the inequality within out sport.”

American teammate Kendall Coyne Schofield agreed: “To learn that there was no contingency plan and the IIHF is letting 250 of the best players in the world in the world return to their homes . . . with ‘we are seeking new dates’ is simply unacceptable."

The men’s under-18 championship, which starts Monday, was relocated from Michigan to Texas but Fasel noted that decision was made months in advance. He also said next month’s men’s worlds in Latvia could not immediately switch to a new venue if COVID-19 disrupts the event.

Nova Scotia’s chief medical officer, Robert Strang, had given his approval for the tournament early in the week, which sharpened the decision for Team Canada.

“This kind of came out of the blue for us. We really felt we had a safe protocol in place," forward Brianne Jenner told the Canadian Press.

The combination of the pandemic and women’s leagues in transition has kept many players out of any real games for over a year. The 2022 Olympics in Beijing are less than a year away.

The cancellation of January’s under-18 women’s world championship in Sweden had Jenner feeling that international women’s hockey is getting hit in a way the men's game is not.

“If you pan out beyond this tournament and you look at the fact that we haven’t played a game all year, I don’t know if there’s anyone to blame, but if you’re a young girl, the outcome is you are seeing no women’s hockey games this year,” Jenner said. “If you are a young boy, you are not seeing the same.”

The majority of the Canadian team was playing in the Canadian Women’s Hockey League when the CWHL folded in the spring of 2019. Those players and American stars became the faces of the Professional Women’s Hockey Players’ Association (PWHPA), which has played a series of games and wants to establish a league with higher wages and support than the NWHL, which recently completed its abbreviated season.

“Our group in a way feels as if our sport is on hold,” Jenner said. “It goes beyond just one tournament. We’ve just had a string of bad luck in women’s hockey.”