Women's issues at UN: Still 'too low down on the agenda' 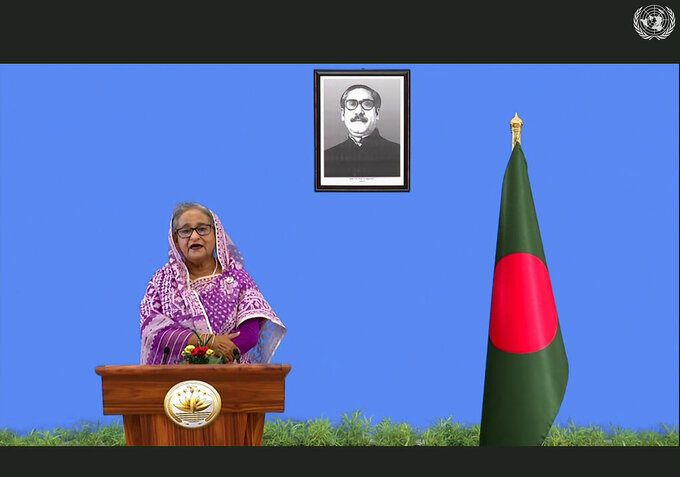 In this photo made from UNTV video, Sheikh Hasina, Prime Minister of Bangladesh, speaks in a pre-recorded message which was played during the 75th session of the United Nations General Assembly, Saturday, Sept. 26, 2020, at UN Headquarters. (UNTV Via AP )

The international community has “come a long way to ensure gender equality” since then, Hasina said, but “we need to strengthen our resolve and mutual cooperation.”

Hasina didn't really have to say more to show that there was still a long way to go. She was one of nine women among the more than 180 presidents, premiers, monarchs and ministers who spoke at the planet’s top diplomatic meeting this year.

While the U.N. is preparing for a separate summit Thursday to mark the anniversary of the landmark female empowerment plan, women's rights were a steady thread but hardly a top theme of leaders' remarks at the world body's signature assembly.

Some leaders took time to recall the 1995 conference, detail domestic initiatives or lament that progress toward female equality is lagging or even retreating. Rwandan President Paul Kagame, whose country has a rare majority-female Parliament, spotlighted the Beijing conference by mentioning it just a minute into his speech.

“The empowerment of women has made all of us safer and wealthier,” he added, "but true gender equality has still not been attained in any country.”

Yet with the coronavirus pandemic shoving numerous other issues out of the spotlight, many speakers gave the status of women and girls a passing mention, if any, even as the U.N. warns that the virus crisis is exacerbating gender inequities.

“If the General Assembly statements are a kind of snapshot into what the world is prioritizing at the moment ... this is too low down on the agenda,” says Rachel Vogelstein, who runs the Council on Foreign Relations’ Women and Foreign Policy Program.

“I certainly understand that COVID-19 is at the top of any country’s agenda at this moment," she said, "but I would argue that it’s a mistake to see the participation, the economic well-being and the status of 50% of the population as a back-burner issue.”

Mala Htun, a University of New Mexico political science professor who focuses on women’s rights, said the U.N. has played an important role in spreading ideas about gender equality around the globe, but they haven’t proven easy to realize even within the organization itself, which has yet to have a female secretary-general.

“People desire inclusion, and it’s widely accepted as a goal, but it’s more challenging to put into practice,” Htun said.

The 1995 work of what was officially called the U.N.'s Fourth World Conference on Women is considered a signal moment in women's rights.

It drew tens of thousands of activists, and delegates from 189 countries hammered out a sweeping declaration including the famous statement that “women’s rights are human rights,” echoing a line in then-U.S. first lady Hillary Clinton’s speech to the delegates.

In the years since, there have been important gains in girls' enrollment in primary school, maternal mortality and legal protections against violence and discrimination, according to the U.N.

There are 21 female presidents and prime ministers worldwide, about twice as many as in 1995. The proportion of women in national legislatures has more than doubled since 1995, to nearly 25%, according to statistics compiled by the Inter-Parliamentary Union, an independent group.

Yet women's participation in the workforce has dropped since 1995, according to the World Bank. More than a third of female 15-to-24-year-olds aren't in school, jobs or training, more than twice the proportion of their male counterparts, U.N. Deputy Secretary-General Amina Mohammed noted at an event last week. And over 2.5 billion women and girls around the world live in countries where laws give men advantages in inheritance, divorce and other areas, according to a December U.N. report.

“Twenty-five years since Beijing, today’s generation of girls must be able to realize their unlimited ambitions and potential,” U.N. Secretary-General Antonio Guterres told the virtual General Assembly, which the pandemic forced online. But “unless we act now, gender equality could be set back by decades.”

He said the pandemic is compounding the disadvantages of women who, compared to men, do more of the unpaid work of caring for loved ones, disproportionately work in fields that have been hit by job losses and make less. At the same time, reports of domestic violence have increased in many countries during coronavirus lockdowns, according to the U.N.

The increase in sexual and gender-based violence against Liberian girls and young women was “unprecedented,” said President George Weah, even for a country where rape was rampant during civil wars that spanned from 1989 to 2003. Liberia later passed some of the region's toughest laws against the crime and chose Africa's first elected female president, Ellen Johnson Sirleaf.

Calling rape an “epidemic within the pandemic,” Weah has declared it a national emergency, appointed a special prosecutor and set up a sex offender registry, he told the assembly. Jamaican Prime Minister Andrew Holness said his country is working to ensure its pandemic recovery efforts “include a gender perspective and harness the full potential of all members of society as leaders, innovators" and change-makers.

Other leaders spotlighted policy and political moves that predate the pandemic, from Argentina's new Ministry of Women, Genders and Diversity to the fact that Moldova has a female speaker of parliament. Indian Prime Minister Narendra Modi pointed to his country's 2017 law requiring some employers to provide 26 weeks of paid maternity leave.

Still, many leaders, including some female ones, didn't devote much time or detail to women's issues in their speeches. Chinese President Xi Jinping made no mention of the 1995 conference that his country hosted, though he listed women and children among other causes poised to benefit from Chinese international aid.

In Norway, the prime minister, the parliament speaker and over 40% of parliamentarians and government ministers are women. Public companies' boards must be 40% female; that’s twice the current percentage in the U.S., where there is no such nationwide quota. (Norwegian researchers have noted, however, that the requirement hasn't translated into similar gains for women as CEOs or other top executives.)

Prime Minister Erna Solberg told the assembly her country’s experience shows that promoting women’s rights “is not just the right thing to do – it is the smart thing to do.”

“Gender equality," she said, “is well worth the investments.”