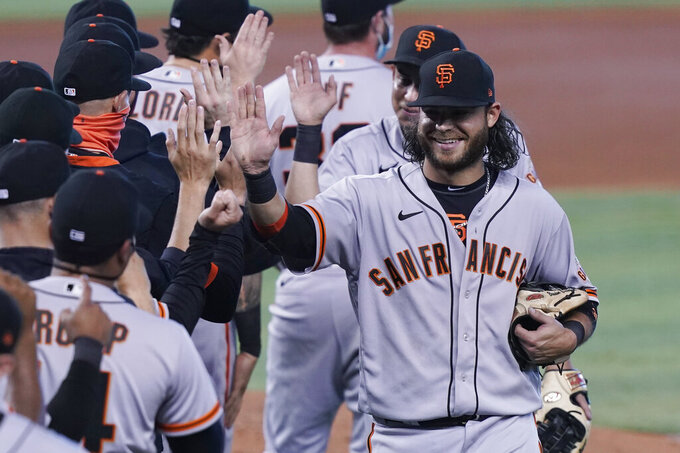 MIAMI (AP) — Several firsts by the Giants’ pitching staff added up to a bunch of zeroes for the Marlins.

Alex Wood threw five innings in his first start for San Francisco, reliever Camilo Doval made a successful major league debut and Tyler Rogers earned his first save of the year as the Giants beat Miami 1-0 Sunday.

The Marlins totaled only three hits against five pitchers, and the Giants averted a series sweep by scoring an unearned run in the third.

Wood (1-0), returning from a back problem that sidelined him midway through spring training, allowed three hits and walked none. The left-hander signed a $3 million, one-year contract after pitching for the Los Angeles Dodgers in 2020.

“I felt really good,” he said. “It was a really good start. Any time there are zeroes on the board, no matter how you get there, that’s always a positive.”

With the Giants' bullpen depleted by a 10-inning loss Saturday night, they called on Doval in the seventh. The rookie pitched a perfect inning against the heart of the order, striking out Jesús Aguilar and Adam Duvall.

“It’s not the easiest task, but he stepped up and met the challenge,” manager Gabe Kapler said. “The athlete came out.”

With closer Jake McGee unavailable, Rogers threw a perfect ninth for the Giants' third shutout in their past seven games.

McGee blew a save Saturday, possibly because he was feeling lingering effects from the COVID-19 vaccine. He went on the injured list Sunday but isn't expected to be sidelined long.

The Giants retired the last 13 batters.

Miami also lost center fielder Starling Marte, who tweaked his oblique batting with two out in the ninth. Jorge Alfaro replaced him and grounded out to end the game.

“It is something Starling just felt,” Marlins manager Don Mattingly said. "One thing we didn’t want him to do is take another swing and do more damage, if there is any.”

Pablo López (0-2) totaled a career-high nine strikeouts in six innings but allowed the unearned run. The Giants had a runner at first when Aguilar failed to glove a two-out grounder at first base for an error, and Alex Dickerson followed with an RBI single.

Miami totaled only four baserunners and lost two of them. Miguel Rojas was picked off second base in the first inning, and Jazz Chisholm Jr. was out trying to stretch a hit into a double in the fifth.

“It was one of those days that they seemed to be better than us," Mattingly said. “We took a couple of opportunities away.”

Giants center fielder Austin Slater made a diving catch to rob López of an extra-base hit.

Giants: C Buster Posey (bruised left elbow) had some swelling less than 24 hours after being hit by a pitch from Sandy Alcantara, but it was better after the game, Kapler said. X-rays were negative.

The Giants begin a three-game series Monday in Philadelphia where Kapler was fired in 2019 after two seasons with the Phillies.

“I did the best job I could every day,” Kapler said. “It didn’t work out. We didn’t win enough. That ultimately is the bottom line.”

What sort of reception does he expect from the Phillies’ notoriously unforgiving fans?

“Making that prediction, I just don’t know where to begin,” Kapler said.

Doval said that when he struck out Aguilar to start the seventh, the slugger startled him with a profanity.

“I said, ‘Wow, is that how things are going to be up here?’” the Dominican said with a laugh.

Marlins: RHP Nick Neidert (0-0, 4.00) is scheduled to start Tuesday when Miami begins a two-game series against the Baltimore Orioles.