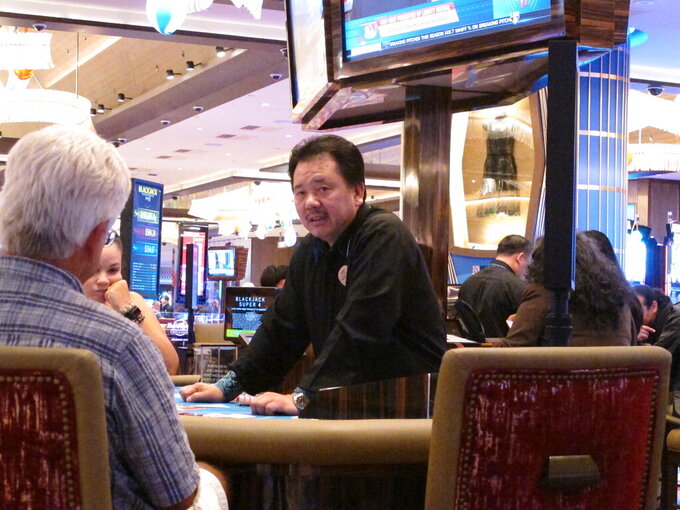 In a June 20, 2019 photo, a dealer conducts a card game at the Hard Rock casino in Atlantic City N.J. On Tuesday, May 5, 2020 unions and casino workers in four states called for casinos to provide protective equipment and adopt strict cleaning and health measures before casinos reopen in the U.S. (AP Photo/Wayne Parry)

ATLANTIC CITY, N.J. (AP) — Casino workers across the country want their employers to provide them with protective equipment and adopt tough new cleaning and social distancing policies before the gambling halls reopen during the coronavirus outbreak.

Union leaders and workers from casinos in Las Vegas, Atlantic City, New Orleans and Biloxi, Mississippi, held a video press conference Tuesday to call for all workers to be tested at the casinos' expense before returning back to their jobs.

Two of the country's largest casino worker unions, Unite Here and the Culinary Workers Union, also laid out detailed health and safety protocols unique to each worker's job, including measures to protect not only dealers and cocktail servers, but also room cleaners and kitchen and laundry workers.

“I'm scared to touch dirty beds and towels and catch the virus and get my children sick,” said Gladis Blanco, a guest room attendant at the Bellagio in Las Vegas.

“They are going to be like first responders, interacting on the floor with guests,” Marlene Patrick Cooper, president of Unite Here locals in New Orleans and Biloxi, said of workers.

From the smattering of reopening plans revealed by a small number of casino companies, there appears to be agreement on some of the basics of what the workers want. Companies including Wynn Resorts, Hard Rock and Las Vegas Sands have all endorsed providing masks and gloves, and embraced social distancing.

But the union's requests go much deeper, asking not only for new procedures, but major new commitments of time and resources to implement them. Donald “D” Taylor, Unite Here's national president, said workers have to be given ample time to carry out the higher level of cleaning that guests will expect.

He praised Wynn Resorts for releasing detailed plans for reopening its casinos that included detailed worker and guest protections, and called on others to do likewise.

The American Gaming Association, the casino industry's trade group, was studying the requests and said it would respond later Tuesday.

Some procedures the unions want:

— All high-touch surfaces including doorknobs and handles, telephones, light switches, tables, chairs and work surfaces, desktops, washrooms, kiosks and menus should be cleaned and disinfected at least every hour.

— Elevator surfaces and buttons should be cleaned and disinfected multiple times per hour, and attendants should be assigned to each elevator to press buttons for guests.

— Guests should be issued masks upon arriving, and doors should be opened for them so they don't touch door handles.

— Workers should not be disciplined for refusing to report to work in any state in which a coronavirus case had been reported within the prior 14 days.

Workers all described being eager to return to their jobs, while fearful of getting sick in doing so.

“My son works at a small hotel property. Is he going to bring a virus home to me?” asked Brenda Tucker Cassity, a bakery worker at the Beau Rivage casino in Biloxi. “I have elderly parents. I worry I might be bringing it home to them.”

Jeff Payne, a lounge server at Caesars casino in Atlantic City, said the most important thing is that casino management and workers realize they are in this together.

“The casino industry, built on rewards and tiers, must understand that we are all equal,” Payne said. “COVID virus doesn't care how much you gamble or what tier you are.”