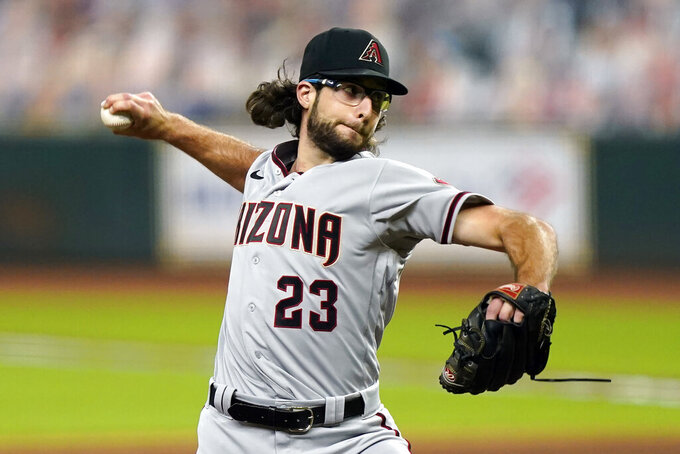 FILE - Arizona Diamondbacks starting pitcher Zac Gallen throws against the Houston Astros during the first inning of a baseball game in Houston, in this Friday, Sept. 18, 2020, file photo. If the Arizona Diamondbacks want to win a lot of games this season they probably need right-hander Zac Gallen to throw a lot of quality innings. If the franchise wants to be good for the next several years, it's also imperative that the 25-year-old — who finished ninth in the NL Cy Young voting last season — stays healthy. (AP Photo/David J. Phillip, File)

SCOTTSDALE, Ariz. (AP) — If the Arizona Diamondbacks want to win a lot of games this season they probably need right-hander Zac Gallen to throw a lot of quality innings.

If the franchise wants to be good for the next several years, it's also imperative that the 25-year-old — who finished ninth in the NL Cy Young voting last season — stays healthy.

The challenge of balancing the present and the future is nothing new for Major League Baseball teams, who are particularly careful with star young pitchers. But the calculus might be even tougher in 2021 because pitchers are coming off a much smaller workload during the pandemic-shortened 2020 season.

Gallen, who finished with a 3-2 record and a 2.75 ERA last season in 72 innings, is adamant he's ready to ramp back up to nearly 200 innings if needed, even if it appears unlikely the D-backs would push him that hard.

“I'm going to pitch until they tell me to stop pitching,” Gallen said. “And then I'll probably still say, ‘No, let me go back out there.’"

There's little doubt teams will be very careful extending their pitchers to the usual 180 to 200 innings that a typical starter logs in a 162-game season. There's even talk about using six-man rotations for some teams, including the Seattle Mariners, who used the strategy for much of 2020 during the 60-game schedule.

“Our primary thought behind it is to preserve the health and well-being of our pitchers,” Seattle GM Jerry Dipoto said. “In an era where teams are trying to find a competitive advantage by throwing their starters for shorter lengths of time and just running them harder, we feel like our advantage, our competitive advantage is by keeping our pitchers healthy and having our best pitchers pitch over the length of the season, rather than the potential dangers of running them into the injury.”

The Detroit Tigers have several young pitchers they're trying to bring along slowly and new manager A.J. Hinch said the six-man rotation is a possibility.

“We’ve got a lot of guys that we’re wanting to stretch out and give a look, and obviously there’s a competition going on for five or six spots, depending on what we go with,” Hinch said.

But the strategy might not be a great decision for every team. The five-man rotation has been a durable staple for MLB teams over the past 30 to 40 years, even as sabermetrics have changed many of the game's strategies.

The math is fairly simple. In a five-man rotation, pitchers make about 32 starts per season. Assuming an average of about six innings per start, that's 192 innings through a 162-game schedule.

In a six-man rotation, the number of starts goes down to 27. At six innings a start, that's 162 innings in a season, or 30 less than a pitcher in a five-man rotation.

Certainly, that means pitchers get more rest. But it also means a staff ace isn't on the mound as much.

Colorado manager Bud Black is one who plans to stick with a five-man rotation if possible.

“A lot of times it’s what we can condition our players to do and right now our starting pitchers across baseball are conditioned to throw every fifth day,” Black said. “We can go on and on about pitch counts and 200 innings and all the things that go in with that, but we as an industry have created some of these standards -- good or bad.”

Teams won't necessarily have to go to a six-man rotation to preserve their arms. There are other strategies available, including fewer innings per start or skipping an occasional start when the schedule allows.

“I’m not in the logistics business so for me to try and gameplan would be above my pay grade,” Gallen said. “But there’s things I imagine you could do throughout the year. Maybe take a look at days off or whatever it is, push a start back.”

The goal is to avoid a situation where Gallen is shut down during important games in September or the playoffs. The Washington Nationals took a lot of heat in 2012 when they decided to sit young ace Stephen Strasburg during the playoffs. He was coming off an injury the year before and capped at about 160 innings.

The Nationals — who won 98 games that year — ended up losing to the St. Louis Cardinals in the NL Division Series. In baseball careers with finite chances at postseason glory, it was undeniably a lost opportunity.

“That would be the last time you would want to be sitting on the sideline,” Gallen said.

The flip side? Seven years later in 2019 the Nationals won it all and a healthy Strasburg was named the World Series MVP.