World leaders who skipped past UN meetings get their moment 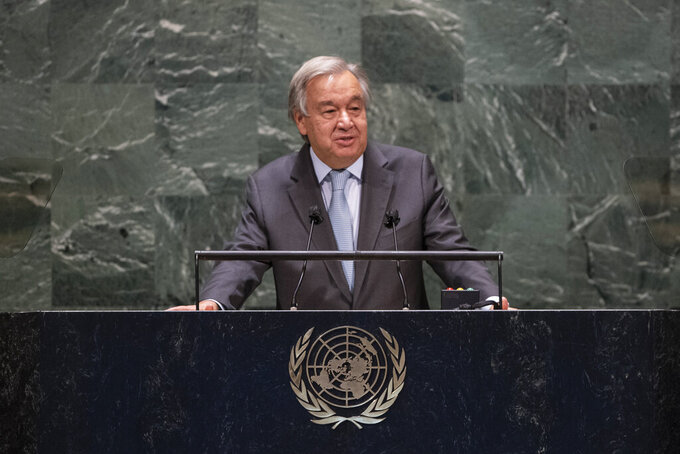 In this photo provided by the United Nations, Secretary-General António Guterres speaks during the 75th session of the United Nations General Assembly, Tuesday, Sept. 22, 2020, at U.N. Headquarters in New York. The U.N.'s first virtual meeting of world leaders started Tuesday with pre-recorded speeches from some of the planet's biggest powers, kept at home by the coronavirus pandemic that will likely be a dominant theme at their video gathering this year. (Eskinder Debebe/UN via AP)

BOGOTA, Colombia (AP) — He's not recognized as a head of state by the country he'd be visiting. His diplomatic immunity is granted by the United Nations, not an unfriendly American administration that could decide to pick him up on drug-trafficking charges if he sets foot in the United States. Then there’s the $15 million U.S. bounty for information leading to his arrest.

Venezuelan President Nicolás Maduro has good reason not to travel to New York for the annual United Nations gathering of world leaders. But this year’s virtual U.N. General Assembly format means he can be heard without having to come to New York — or risk an uprising back home if he left the country.

Instead, Maduro spoke from the comfort and safety of the presidential palace, renewing his place on the international stage after missing out on last year’s event.

“This opens up an opportunity that Maduro doesn’t usually have,” Venezuelan analyst Luis Vicente Leon said. “On a net scale, he comes out winning.”

He's not alone. A virtual General Assembly knows no national borders, incurs no travel expenses and allows even the most cautious, prickly or paranoid leaders to have their say without leaving their at-home security bubbles.

Philippines President Rodrigo Duterte spoke to the General Assembly for the first time in his four years in office. Saudi Arabia’s King Salman’s speech marks only the second time in more than six decades that a sitting monarch from the kingdom addresses the gathering. And Tanzania’s populist president, who rarely leaves the country, will get his 15 minutes, too.

Whether a short online speech will give them a leg up at home remains to be seen. After months of lockdown, much of the world is effectively Zoomed out. But these leaders' voices will almost certainly travel farther than in years past. The opposite is true for their opposition foes, who generally rely on side events to get their message out as leaders came together in New York.

“The virtual speeches do give an opening,” said Shannon O’Neil, a vice president at the Council on Foreign Relations, said as the assembly got underway. “But the virtual format puts them on the same platform as your regular Zoom, too.”

Venezuela’s situation is a case in point: The nation is in the midst of a power tug of war between Maduro and U.S.-backed opposition leader Juan Guaidó. Last year, both men sent representatives who carefully avoided crossing paths at the U.N.. While Vice President Delcy Rodríguez got the main stage, the opposition commanded a powerful presence on the sidelines. U.S. President Donald Trump personally hosted one of four high-level meetings on the country’s crisis.

This year, Maduro gave his country's official address and Guaidó delivered online remarks on a separate platform. Guaidó's aides are attending some side U.N. events – none of which are specifically about Venezuela. The lack of face-to-face meetings is expected to make things more complicated for the opposition, which has been losing momentum over the last year.

“Without a doubt this format makes it much more difficult to focus just on Venezuela,” said Miguel Pizarro, who represents the opposition’s humanitarian efforts in Washington.

“I think in general for Venezuelans every time that Maduro talks trying to represent us all, it’s an insult,” the exiled Venezuelan lawmaker said.

But the online speech also is unlikely to win Maduro any new friends.

A recent U.N. Human Rights Council-commissioned report accuses Maduro’s government of committing crimes against humanity, including grisly cases of torture and killings supposedly carried out by security forces. Their method: electric shocks, genital mutilation, asphyxiation and more. The allegations are likely to be brought up repeatedly at the virtual assembly.

“I don’t believe he is going to have any added benefit,” said retired U.S. Ambassador Nicholas Burns, a professor at the Harvard Kennedy School. “If he is speaking on Zoom it might as well attract additional criticism.”

All leaders making an appearance on the U.N. screen could see diminished returns.

“Most of the leaders are going to see this as a purely domestic exercise,” said Philip Alston, a law professor at New York University. “That is always the case to some extent, but given there is no opportunity for photo ops, for meetings with other presidents and so on, the only real value is getting speech out there which restates certain positions for domestic consumption.”

Duterte used the platform Tuesday to defend his drug crackdown that has left more than 5,700 mostly poor people dead. Tanzania’s John Magufuli will speak as he seeks a second term in an election next month in which opposition leaders say they’ve faced government obstruction at every turn. And King Salman’s speech was the first since his brother addressed the General Assembly in 1957. The 84-year-old monarch has generally relied on his foreign minister.

In a short speech Monday to commemorate the U.N.’s 75th year, Maduro came out swinging, charging that the world is facing a critical choice between a multipolar world and one dominated by imperialism.

“A world of diversity, peace and cooperation versus a world of hegemony,” he said, speaking before a giant portrait of liberation hero Simón Bolivar.

As his speech was broadcast on Maduro’s Facebook feed, some chimed in congratulating the “comrade” while others blasted him for appearing at all.

“Thank you, Mr. President, for your work in destroying the country,” one man wrote.

Fanny González, 60, watched the feed from her mobile phone. Though a proud Maduro supporter, she’s watched her two adult children leave the country in recent years, joining an estimated 5 million compatriots who have decided to seek a future abroad. Electricity and water outages are frequent. Government boxes of food are slower to arrive.

Still, she said it made her proud to watch him from the apartment she credits the late Hugo Chávez’s socialist revolution with providing her.

“Many thought he wouldn’t survive,” she said. “But he keeps moving forward.”