Worried about virus, US House won't return — for now 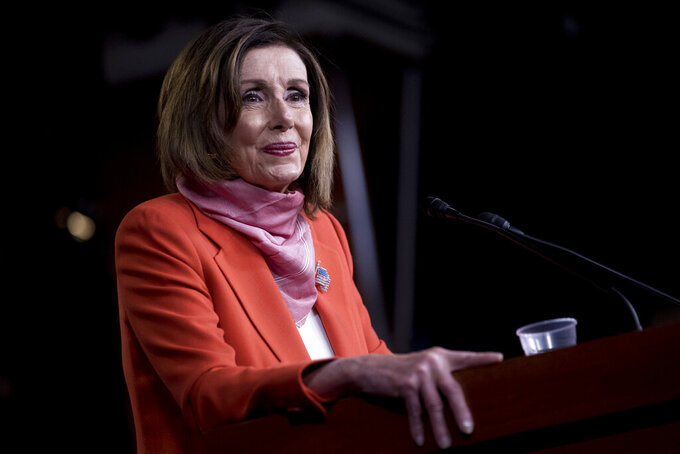 FILE - In this April 24, 2020, file photo House Speaker Nancy Pelosi of Calif., takes a question from a reporter during a news conference on Capitol Hill in Washington. Pelosi shelved a proposal for proxy voting this week after Republicans objected. (AP Photo/Andrew Harnik, File)

WASHINGTON (AP) — Facing the stark, startling reality that Congress may not be able to fully resume for a year, House leaders are desperately reaching for work-from-home options after a revolt from the ranks over the health risks of convening during the coronavirus pandemic.

House Democratic leaders abruptly reversed course Tuesday, shelving plans for the chamber's 400-plus lawmakers to return for work on the next virus aid package after warnings from the Capitol physician that the public health danger was too great. The Senate, with its smaller numbers, still expects to return next Monday.

“We had no choice,” House Speaker Nancy Pelosi said. “If the House physician recommends that we not come back, then we have to take that guidance.”

It's not just the elected officials at risk. The U.S. Capitol is a throwback of crowded hearing rooms, packed hallways and thousands of congressional staff crunched in office cubicles and cafeteria lunch lines — all unwelcome in the new era of social distancing. It additionally relies on an army of cooks, custodians, electricians and police, who keep the iconic domed building and sprawling maze of offices running.

Despite a halt in public tours, started in mid-March and extended Tuesday through mid-May by the House and Senate sergeants at arms, few other protocols have been announced beyond masks for lawmakers and staggered roll call votes.

Closing normal operations for weeks, months or even longer seems unthinkable to some, more dire than actions taken during the deadly 1918 Spanish flu or the Sept. 11 attack. There really is no direct comparison in U.S. history.

President Donald Trump scoffed from the White House that the stay-home House members were “enjoying their vacation.”

Pelosi and House Majority Leader Steny Hoyer declared the sudden about-face on regular meetings after consultation with the Capitol physician as lawmakers vigorously objected to next week's schedule.

Others questioned whether virus testing would be available and what steps were being taken to keep staff safe. They heard few answers, according to a person unauthorized to discuss the private call and granted anonymity to comment.

The Capitol physician has privately warned key lawmakers it will be at least a year before Congress can return to business as usual.

While frustrated lawmakers long for what's being lost as a co-equal branch of government, many are also older and in high-risk categories for contracting the virus. Some care for children and families. Most have to commute from their states while airlines are running fewer flights.

Because the Washington, D.C., area remains a “hotspot” under stay-home orders, with the number of cases “going up and not down,” Hoyer said it makes sense to hold off reopening for now.

As lawmakers envision the new norm in Congress, one top priority for both parties is to reopen their committees to conduct oversight of nearly $3 trillion in coronavirus relief and to draft legislation, including the next virus aid package.

“Technology has enabled us to do things without physically being in the same place together,” Hoyer said. “That’s what I hope we can achieve for committees.”

Holding committee meetings via teleconference would require a change to House rules that now largely mandate that lawmakers be physically present for most sessions.

GOP leader Kevin McCarthy of California has signaled he favors opening up committees for work.

A bipartisan House task force agreed to have committees test-drive technology options with public round-table meetings in the days ahead.

But House Republicans argued the House should return to work and panned a more ambitious proposal for proxy voting that was shelved last week so talks could continue. Pelosi said Tuesday she still hopes to “get that done.”

The Senate, meanwhile, remains on track to return Monday.

It's unclear whether the GOP leader sought guidance from the physician's office. McConnell's office said it had no further comment.

If the Senate resumes, Democratic leader Chuck Schumer said it must hold public hearings on the Trump administration’s response to the COVID-19 pandemic.

Schumer said he wants to hear why coronavirus testing “isn’t working” and to probe the new small business lending program that faces accusations of not sending enough aid to smaller shops.

“This is part of what the Constitution gave Congress the responsibility to do — oversight of the executive branch,” Schumer said on MSNBC. "We need these oversight hearings, and we need them now.”

While the coronavirus pandemic did the nearly unthinkable in Washington, sparking a rare bipartisanship accord between Democrats and Republicans on the biggest rescue package in history — a $2 trillion effort, followed by $500 billion last week — it may not extend to the next effort to provide aid.

The two parties are far apart on priorities. Pelosi wants at least $500 billion for hard-hit state and local governments to pay police, fire and other front-line “heroes.” McConnell has suggested changing the laws to let states declare bankruptcy and said on Fox his “red line” is liability protection for health providers and business owners in the pandemic.

As the Senate resumes, McConnell has said its most important job remains confirming Trump's judicial nominees to federal courts.

“The pandemic will not prevent us from achieving that goal," he said.