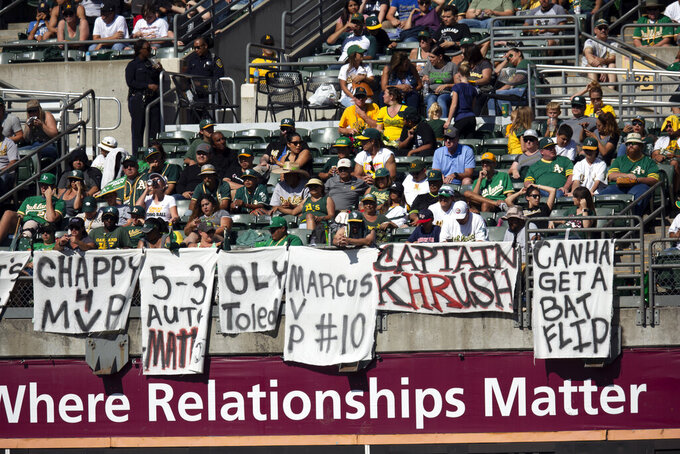 FILE - In this Sept. 22, 2019, file photo, Oakland Athletics fans drape the bleachers with messages for the team during the A's baseball game against the Texas Rangers in Oakland, Calif. Baseball players and owners are currently caught in a bitter dispute over how to start amid the coronavirus pandemic. Both sides occasionally mention fans, talking about doing right by them. But apart from taking sides, how do the fans feel -- would they consider a severely shortened schedule as legit? "I think any rate-based stat record -- batting average, ERA -- would have to be considered an anomaly," Oakland fan Adam Brooks said. (AP Photo/D. Ross Cameron, File)

NEW YORK (AP) — Fresh off a robust round of batting practice in Central Park, softball slugger Todd Montgomery squared up his Mets cap and took a swing at hardball questions involving his favorite team.

Would Jacob deGrom be worthy of a third straight Cy Young Award if he goes 4-2 with a 1.45 ERA?

Does Pete Alonso get on the hallowed MVP list by hitting 19 home runs?

And the big one: If the New York Mets win the World Series in a 50-game season, does that pennant proudly flap alongside the banners from ’69 and ’86?

“Fly it high! It counts. It all counts,” Montgomery said. “DeGrom doesn’t get to have this year back. Whatever you get, it counts.”

With a caveat, of course.

“It’s abnormal,” offered the 60-year-old songwriter who ran the “School of Rock” team in the Broadway Show League. “Everybody 100 years from now will know it was abnormal.”

That’s if there even is a Major League Baseball season, with players and owners currently caught in a bitter dispute over how to start amid the coronavirus pandemic.

Both sides occasionally mention fans, talking about doing right by them. But apart from taking sides, how do the fans feel — would they consider a severely shortened schedule legit?

To some, a limited MLB season would resemble a European soccer round-robin. That’s how Brewers fan Matt Tobin from Wauwatosa, Wisconsin, sees it.

“Frankly, a 50-game season is basically a playoff. I play Strat-O-Matic baseball regularly. If you play a third of a season, the numbers are so skewed,” he said.

Suppose Christian Yelich got off to an incredibly fast start and wound up batting .402 in 48 games. Would that make him baseball’s first .400 hitter since Ted Williams in 1941?

“I think any rate-based stat record — batting average, ERA — would have to be considered an anomaly,” Oakland fan Adam Brooks said.

Brooks, an orthopedic surgeon in the East Bay suburb of Walnut Creek, California, had planned to bump up from a partial season-ticket package to a full plan this year.

“I mean a starter could go the whole season without giving up a run. Would we then consider that the best starting pitching season ever? Of course not. The stats in this season would just have to be compared only against itself as a bubble,” he said.

Added A’s fan Kimberlee MacVicar: “I don’t see a reason for an asterisk for an individual game stat.”

“If a player hits three home runs or the cycle in a single game, I would count that in their personal stats without an asterisk,” she said.

Kay Kenealy of Waukesha, Wisconsin, holds a 20-game ticket package at Miller Park and has her eye on a bigger prize. She would love to see her Brewers win their first World Series title.

“I’m sure there’s a lot of purists out there who go, you have to play 162 games or whatever," she said. “But if the season’s a month long, you play for that month.”

“I definitely would put a giant asterisk next to it,” he said. “I’d also put an asterisk next to that asterisk, which is like, ‘Hey, you know what? If you want to give me a car, I’ll take it. I’m not going to argue about what kind of car it is.'"

No one disputes the Los Angeles Dodgers' title in 1981 during a strike-split season in which every team played over 100 games. And there's no debate about the third of four straight NL Cy Young Awards won by Greg Maddux in a 1994 season ended in August by a players' strike.

Ken Katz of Columbia, Maryland, has no illusions about seeing a 2020 championship flag flying over Camden Yards next year. He’s been a Sunday season-ticket holder in Baltimore since 1995.

“I think a 50-game season is a joke. Sixty-five is a bit closer, but honestly, if you don’t have three months of baseball, you don’t have a season,” he said.

Either way, he added, “I will be there in section 360, watching and rooting for the Orioles, seeing what’s going on.”

On a gorgeous Tuesday afternoon outside the locked gates of Progressive Field in Cleveland, co-workers Jenna Honsberger and Josiah Begg ate lunch next to the statue of Hall of Famer Larry Doby.

The pandemic has emptied the city’s streets, which under normal circumstances would be filled with fans in the hours leading up to the first pitch between the Indians and Orioles.

At this point, an abbreviated season would bring a welcomed lift.

“I would like that. It would be better than nothing,” the 30-year-old Honsberger said. “That would be something good for this city and for other cities."

And Begg would gladly take the Indians' first World Series crown since 1948.

“The world is just out of control weird right now,” he added. “So at this point if you have 50 games with a playoff and World Series or you have nothing — I watch Korean baseball at 6 o’clock in the morning sometimes, so I’d take it.”

So would Montgomery, the New Yorker. As he says, it all counts — amazingly, he’s tracked every home run he’s hit since he was a kid, in any sort of game, ever. Current total: 892.

“Let’s say the Mets or the Red Sox or the Yankees win the World Series this year. We’ll take it, others won’t. But that’s OK,” he said. “So we argue about it. That’s what sports fans do — we argue. Nothing wrong with that.”