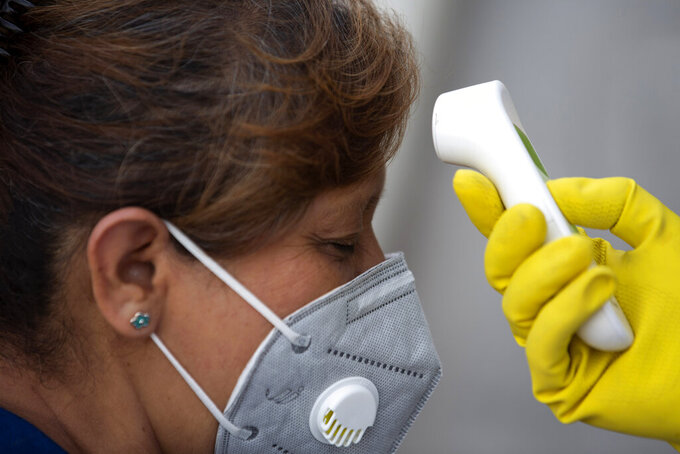 A health worker measures the temperature of a woman before allowing her to enter La Asuncion market to curb the spread of COVID-19 in Villa Nueva, Guatemala, Monday, July 20, 2020. (AP Photo/Moises Castillo)

MIAMI (AP) — The race to corral the coronavirus pandemic took on even greater urgency Monday as a burgeoning economic crisis collided with political turmoil. While the latest experimental vaccine appeared to show promise, politicians in Washington were far apart in finding a way to bring financial relief to Americans.

With the first federal relief package poised to end, Congress was trying to agree on another deal to ease the financial burden on Americans as businesses have endured repeated closures meant to contain the spread of the virus.

The political turmoil played out amid apparent good news on the medical front, with scientists involved in the development of at least one vaccine reporting promising results in an early trial.

Congressional Republicans at odds with Democrats over how much money is enough for a new rescue package also face pushback from the White House. GOP leaders met with President Donald Trump as the White House panned some $25 billion in the party's plan that would be devoted to testing and tracing, said one Republican familiar with the discussions.

Democrats have passed a $3 trillion package in the House, while the Republican plan totals about $1 trillion.

“We have to end this virus,” House Speaker Nancy Pelosi said on MSNBC. Any attempt by the White House to block testing money “goes beyond ignorance.”

The political stakes are high before the November election, especially with the nation registering the most coronavirus infections and deaths in the world. With 17 straight weeks of unemployment claims topping 1 million, many households were facing a cash crunch and losing employer-backed health insurance coverage.

The number of cases was spiking in spots throughout the U.S., stressing the medical system, Americans' psyche and the economy.

Malls in San Francisco were ordered closed about a month after reopening. Four months after the San Francisco Bay Area became the first place in the nation to issue broad stay-at-home orders to prevent the virus from spreading, only one Bay Area county is not on the governor's watch list for areas with rising infection and hospitalization rates.

In Chicago, the mayor imposed new restrictions on bars, gyms and personal services such as facials as health officials reported that the city again topped 200 daily cases on average. Officials attributed the rise primarily to young people going to bars and restaurants and Lake Michigan beaches.

New York Gov. Andrew Cuomo, a Democrat, flew to Georgia to help deliver masks, test kits, gowns, face shields and hand sanitizer in Savannah. His visit offered tacit support to a mayor who has been a pacesetter in a revolt against Republican Gov. Brian Kemp’s refusal to allow local governments to order people to wear masks.

Georgia's cases continue to rise, and Kemp has been embroiled in a public tussle with some local officials, including Savannah Mayor Van Johnson, over mandates on face coverings.

Cuomo said that “somehow in this crazy partisan world, we’ve even politicized a virus.”

In Florida, where nearly 9,500 people were hospitalized as of Monday, just 18% of its ICU units were available. But two other hard-hit states reported hopeful signs.

Arizona said hospitalizations were at the lowest level in more than two weeks, while the number of people on ventilators and in intensive care also decreased.

In Texas, health officials in Houston were cautiously optimistic as the number of people requiring hospitalization “seems to have tapered off a bit.” But deaths in the second-largest state soared above 4,000, and officials in the border state of Starr County, where a team of Navy doctors was sent to help the only hospital, said they were considering creating an ethics committee to discuss rationing hospital resources.

“It sounds cold, and I hate to think that we would even have to do it, but we need to at least consider what chances a patient has of surviving,” County Judge Eloy Vera said.

State governments not only face a strain on medical resources but have been forced to borrow billions of dollars and slash costs by furloughing workers, delaying construction projects, cutting school aid and even closing highway rest areas.

Businesses also are being squeezed. Potions in Motions, a catering company in Fort Lauderdale, Florida, would ordinarily be in high gear for summer weddings, graduations and corporate events, but with restrictions on group gatherings, they’re down to “micro-events” with eight to 15 people. They’ve had to cut most of their staff.

“We’re trying to just stay alive and keep as many people employed,” company founder Jason Savino said. “There’s no support coming from any government or anywhere that are accommodating these businesses that are being ordered to dial their business back."

In Ludington, Michigan, Timbers Seafood and Steakhouse closed for two days as a precaution after a busboy said he had COVID-19. The restaurant lost thousands of dollars.

Timbers was trying to recover during the peak summer season after months of being closed, and the busboy later acknowledged he lied to get a day off, Hritco said.

“This is a young kid that made a mistake,” Hritco said. “But this is now a police matter.”

In New Orleans, meanwhile, families picked up fresh peppers, milk, meat and diapers at a food giveaway outside a community center.

Melanie Richardson, executive director of the nonprofit Training Grounds, said she wanted to help families with food and other supplies as they prepare to lose federal unemployment boost payments.

“We know that that is going to be a huge hit for families,” she said.

The global number of virus deaths has risen to more than 608,000, according to data compiled by Johns Hopkins University. The United States tops the list with nearly 150,000, followed by more than 80,000 in Brazil.

The number of confirmed infections worldwide has passed 14.6 million. Experts believe the pandemic’s true toll is much higher because of testing shortages and data collection issues.

The virus also has led to political rancor globally. European Union leaders have been fighting over an unprecedented 1.85 trillion euro ($2.1 trillion) budget and coronavirus recovery fund. The prolonged debates have been marked by walkouts, fist slamming and insults.

In the EU, the pandemic has killed around 135,000 citizens and plunged its economy into an estimated contraction of 8.3%.

There was a glimmer of hope as scientists at Oxford University say their experimental coronavirus vaccine has shown in an early trial to prompt a protective immune response in hundreds of people.

British researchers began testing the vaccine in April in about 1,000 people, half of whom got the experimental vaccine. In research published Monday in the journal Lancet, scientists said they found their vaccine produced a dual immune response in people ages 18 to 55 that lasted at least two months after they were immunized.

The head of emergencies at the World Health Organization hailed the results as “good news" but warned “there’s a long way to go.”