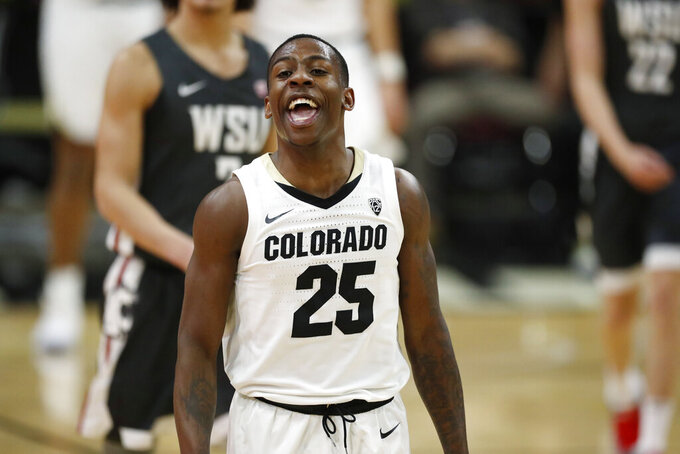 FILE - Colorado guard McKinley Wright IV jokes with teammates as he heads to the bench late in the second half of an NCAA college basketball game against Washington State, in this Thursday, Jan. 23, 2020, file photo taken in Boulder, Colo. Wright, a Minnesota native, will return to play in his senior year at Colorado. (AP Photo/David Zalubowski, File)

BOULDER, Colo. (AP) — McKinley Wright IV watches all 96 of his turnovers from a season ago at least once a week.

Just so he doesn't make the same mistake again. It's simply another way for Colorado's elite point guard to elevate his game to an even higher level.

Wright tested the NBA draft process this summer before returning to Boulder for his senior season. His presence makes an already talent-rich team, filled with promising freshmen, that much more dynamic.

It's also how the Buffaloes take their next step — maybe even turn into one of the best versions under coach Tad Boyle.

That's saying something considering last year’s squad was ranked for 13 weeks. But that team also lost five straight to close out the season. The Buffs were sweating out a spot in the NCAA Tournament at 21-11 before the season was shut down due to the COVID-19 pandemic.

“I can make a promise that we’ll be back there this year,” said Wright, whose team is searching for its first NCAA bid since 2015-16. “We’ve got some dudes that can hoop.”

But the key component will be Wright, a first-team, All-Pac-12 pick last season after averaging 14.4 points, 5.7 rebounds and five assists.

Wright was all set to take his game to the NBA before the pandemic hit. He changed his mind and decided to take what scouts told him to work on — cutting down on turnovers, shooting at a higher percentage — to heart. One of the assistant coaches made a video of all his turnovers, so he could learn from those situations.

“The biggest thing for me — and that the NBA wants to see — is wins,” Wright said. “That’s my main focus is to win games. Whatever I have to do, I’m going to make that happen.”

Missing from the lineup this season will be Tyler Bey after he declared for the draft. Bey was the Pac-12 Conference defensive player of the year. Gone with him are nine rebounds a game.

Boyle hopes the Buffs can make up the difference through Evan Battey — he led Colorado with 84 offensive rebounds — and 7-footer Dallas Walton, who's steadily rounding into form from a knee injury suffered in October 2018.

“This is a very interesting team in that we have veterans that have been here and done that and we’ve got a group of freshmen that have not," said Boyle, whose 210 wins are second on Colorado's all-time list (Sox Walseth had 261). “This is an NCAA Tournament team without a doubt.

“Now we have to go out and prove that.”

Wright ranks second at Colorado with 501 career assists. He's closing in on Jay Humphries’ school mark of 562, which was set from 1980-84.

“I wouldn’t trade him for anybody,” Boyle said of Wright. “He’s a special player.”

Senior guard/forward D’Shawn Schwartz led the team with 51 3-pointers. He was Colorado’s third-leading scorer with a 9.8-point average.

It’s been an interesting preparation period for Colorado. Due to COVID-19 restrictions, the team has gone through different scenarios: One player per basket, two-on-two drills and progressing from there. There hasn’t been much intense defense.

“Guys are driving by people and you get frustrated as a coach, but you remind yourself, ’Well, in normal situations in August, September and October, we would’ve been working on those things,'" Boyle said. "We’re a little bit behind where we’d normally be, especially with those freshmen.”

Forward Jeriah Horne joins the Buffaloes as a graduate transfer. It's Horne's third school after appearing in 29 games with Nebraska in 2016-17 and playing in 63 games while at Tulsa from ’18-20. He averaged 10.6 points with the Golden Hurricane.

“We’re going to need him to step up right away," Boyle said.

Colorado was supposed to open the season on November 25 at the Little Apple Classic in Manhattan, Kansas, against South Dakota State. But the Jackrabbits joined the Crossover Classic. Kansas State and Drake are still in the field.

The quirky Pac-12 schedule has Colorado playing a stretch of four-straight conference road games. The Buffs haven’t done that since 1946-47 during their final year in the Mountain States Conference.