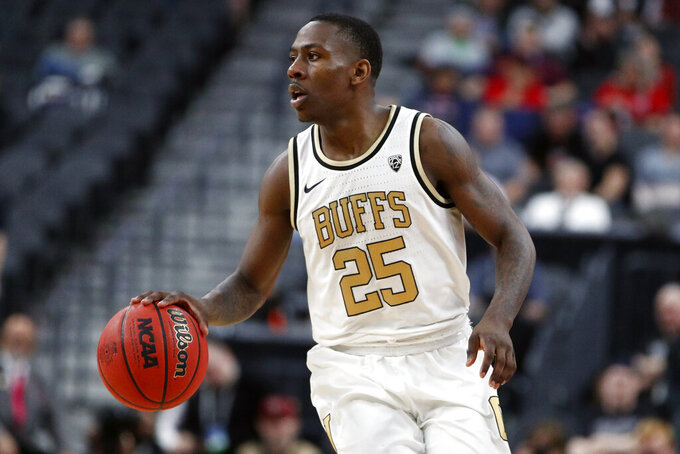 FILE - In this Wednesday, March 11, 2020, file photo, Colorado's McKinley Wright IV (25) drives up the court against Washington State during the second half of an NCAA college basketball game in the first round of the Pac-12 men's tournament in Las Vegas. Wright has decided to return for his senior season after testing out the NBA draft process. He was a member of the All-Pac-12 first team and all-defensive team in a season that was shut down just before the NCAA tournament due to the coronavirus pandemic. (AP Photo/John Locher, File)

McKinley Wright IV will be back for season No. 4 with the Colorado Buffaloes.

The point guard tested the NBA draft process before announcing a return for his senior year. It’s a big boost for a Buffaloes team that's coming off a 21-11 mark in 2019-20 and was potentially looking at an NCAA Tournament bid before the season was halted due to the COVID-19 pandemic.

Wright was an All-Pac-12 first team selection a season ago, along with an all-defensive team pick. He and athletic forward Tyler Bey declared for the draft in late March. Bey remains in the draft.

Midway through the season, the Buffaloes were looking like a lock for their first NCAA Tournament appearance since '15-16. Then, the team hit a five-game skid, including a loss to Washington State in the Pac-12 tournament. Simply put, they hit a defensive rut they just couldn’t shake out of, Wright said. It drove him to work that much harder in the offseason.

“This is my last go-around and I’ve got big dreams,” the 6-footer from Minnesota said. “I want to take CU to a place they haven’t been in a while. We want to go back to the tournament and win high-level games.”

The feedback from NBA scouts was reaffirming for Wright. He said they appreciated his transition game, movement away from the ball and his defensive intangibles. They also gave Wright areas he needed to shore up such as assist-to-turnover ratio and shooting the 3-pointer with more consistency.

He took it to heart while training in Arizona during the pandemic. He recently returned to Boulder, Colorado, where he's going through quarantine before joining his teammates for workouts.

“The work I put in and the time I spent in the gym compared to all my other offseasons, it’s a big gap,” Wright said. “Last offseason, I thought I worked hard. But it was nothing compared to the time and different type of mindset I put myself in this year.”

Another motivating factor for his return was this: a chance to be the first in his family to earn his college degree. He’s majoring in ethnic studies with a minor in communications.

Wright also has an opportunity to take over the top spot on the school's all-time assists list. His 501 career assists trail only Jay Humphries, who had 562 from 1980-84. Wright also ranks 13th all-time with 1,370 career points.

NOTES: Colorado announced the death of 95-year-old fan Betty Hoover, who along with her twin sister, Peggy Coppom, became fixtures at Buffs sporting events and were season ticket holders since 1958. Wright used to run into them not only on the court, but at the local bank. “I’ve never met anyone as loving and supporting and caring as those two,” Wright said. “They hold a special place in my heart. It sucks that Betty won’t be at any games this year. Maybe we can do something, put her name on our jersey. They’re two of the biggest fans in CU history.”