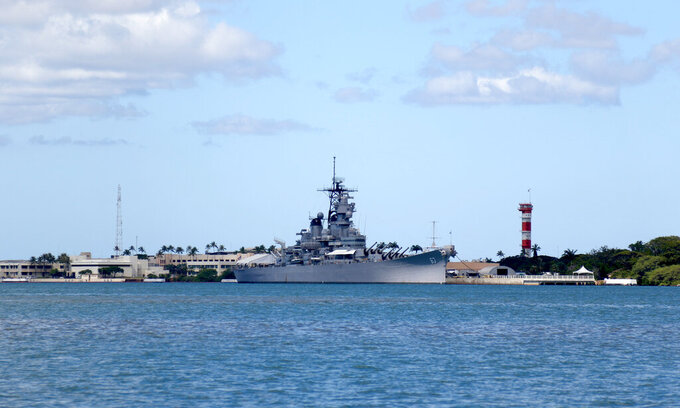 The USS Missouri Memorial is shown in Pearl Harbor, Hawaii, on Aug. 11, 2020. A Pearl Harbor ceremony in Hawaii marking the 75th anniversary of World War II will only feature veterans living in Hawaii after organizers limited those who can attend over coronavirus concerns. The plan before Friday had been to allow about 200 people, mostly WWII veterans, their families and government officials, to gather on the battleship USS Missouri, which hosted the Japanese surrender on Sept. 2, 1945 in Tokyo Bay. (AP Photo/Caleb Jones) 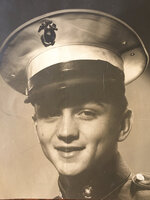 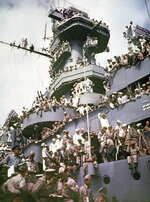 HONOLULU (AP) — A Pearl Harbor ceremony marking the 75th anniversary of the end of World War II — possibly the last opportunity for many aging U.S. veterans to commemorate the day — will be limited to survivors of the war living in Hawaii because of coronavirus concerns.

The plan before Friday had been to allow about 200 people, mostly WWII veterans, their families and government officials, to gather on the battleship USS Missouri, which hosted the Japanese surrender on Sept. 2, 1945 in Tokyo Bay.

But an announcement made Friday night said that those planning to fly into the state are no longer invited in an effort to protect the aging veterans — mostly in their 90s — from COVID-19.

Tony Vericella, the executive director of the 75th WWII Commemoration Committee, said in a phone interview Monday that the decision to limit attendance was a difficult one, but organizers are working on new ways to honor those left out in a virtual setting.

“We are going to do as many things as possible to integrate and name all of those folks who had hoped to be here,” Vericella said. “Everybody felt that the best and safest thing to do with respect to the World War II veterans coming into Hawaii from outside was really just to engage them in the best possible way virtually.”

Vericella said they were confident in local safety measures put in place for the mainland veterans once they arrived for a special flight from Oakland to Honolulu and thereafter, but the risks for those traveling from their hometowns to California was too great.

He said federal and local officials “didn't want to take that particular chance.”

In a story published early Friday, WWII veteran Jerry Pedersen, who was aboard the USS Missouri and watched the Japanese surrender, told The Associated Press he had been looking forward to attending the event for years, but he understood the risks.

“I’ve been told what I need to do in order to be responsible for myself but also toward others,” said Pedersen.

“I want to go back because that day, as much as I remember it, what happened, why we were there, the fact that it was the end of the realities of war and killing and all, it was the first day that I had to start answering, ‘What am I going to do with the rest of my life?’” Pedersen, who turned 95 last week, said.

He received the news on Sunday and later told the AP that he was disappointed, but understood why the decision was made.

"Well, I was very disappointed, yes. I was hoping to maybe see a friend or two," he said. “I think we’re going to go ahead and have a little thing for ourselves here, and I just want to share with at least my family and a couple of other folks some of the feelings that I was going to express when I got there."

Those feelings are complicated, Pedersen said, as he dedicated his life to peace after the war was over.

"War was must not happen again," Pedersen said in remembering the words uttered by Gen. Douglas McArthur on the day the Japanese surrendered aboard the USS Missouri. But “we're still oscillating on many of the things that are necessary to bring us peace.”

Organizers now say fewer than 50 people, mostly veterans and their families, will attend the Sept. 2 ceremony aboard the USS Missouri. The same health screenings and safety measures previously planned will be in place.

“We look forward to honoring our World War II veterans whose service demonstrated the selfless actions of the Greatest Generation," said Adm. Phil Davidson, Commander of the U.S. Indo-Pacific Command in a statement. "These heroes not only served to protect and defend our nation, but liberated hundreds of millions of freedom-loving people, laying the foundation for the rules-based international order that exists to this day.”

With the exception of the actual anniversary ceremony, most events surrounding the commemoration have been cancelled.