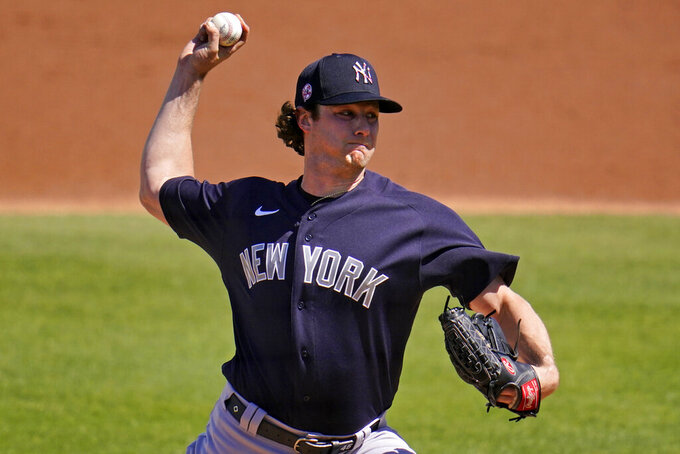 NEW YORK (AP) — The New York Yankees and Mets will be allowed to start the season with a maximum 20% capacity.

Attendees will have to provide proof of immunization against COVID-19 or a negative COVID-19 test. That requirement will be re-evaluated in mid-May.

“The numbers are coming down. We have to start moving forward,” Cuomo said.

Cuomo began allowing fans back with the NFL’s Buffalo Bills in the playoffs, who drew 6,772 each, about 9.4% of capacity at Bills Stadium in Orchard Park, New York, for their 27-24 win over Indianapolis on Jan. 9 and for their 17-3 loss to Baltimore on Jan. 16.

“We did testing. It worked extraordinarily well,” Cuomo said. “It was a great demonstration. We’re now going to move forward.″

He announced in mid-February that indoor sports arenas could allow 10% capacity starting Feb. 23, which impacted NBA and NHL teams.

Performing arts will be allowed outdoors starting April 1 with capacities of 20% at venues of 2,500 or more.

Contact tracing will be conducted to determine whether anyone who attended got infected.

“I think you’re going to see the capacity increase and the testing requirements decrease as we get more evidence. But we want to start safe and smart,” Cuomo said.

No fans were allowed during the delayed 2020 regular season, which was reduced from 162 to 60 games per team because of the novel coronavirus. Yankees ace Gerrit Cole spent his entire first season in pinstripes pitching in an empty ballpark.

“My dad’s been itching to get to Yankee Stadium to watch a game,” Cole said last week. “If they don’t let us in for an opening day. I’m going to put the radio on outside the gate and just sit there and listen,” Cole recalled his father telling him.

“I think we could probably get you in,” the pitcher remembered responding. “And then, of course, now it’s for sure it’ll be able to happen, and he gets to see it. So he’s excited, and it’ll be honestly easier on everybody’s family now that we got some access.”

Fans were allowed only during the postseason at Arlington, Texas, where 75,843 attended the Los Angeles Dodgers’ win over Atlanta in the seven-game NL Championship Series and 68,622 attended the Dodgers’ victory over Tampa Bay in a six-game World Series.

All teams are expected to have fans for the start of the regular season and all but Detroit and Houston have made announcements, the baseball commissioner's office said. Only the Texas Rangers will be at 100% capacity.

Because of Canadian government restrictions, Toronto will play its first two homestands at TD Ballpark, its spring training home in Dunedin, Florida, where capacity will be 15%. The Blue Jays played home games last year at their Triple-A farm team’s stadium in Buffalo, New York.