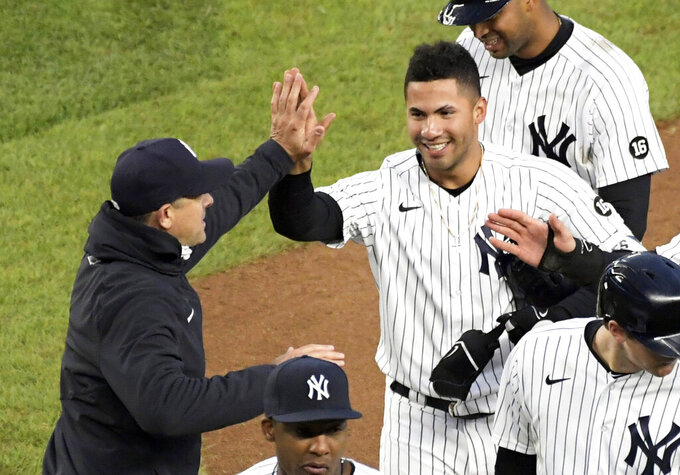 New York Yankees' Gleyber Torres is congratulated by manager Aaron Boone after Torres drove in the winning run in the 11th inning of the team's baseball game against the Washington Nationals on Saturday, May 8, 2021, at Yankee Stadium in New York. The Yankees won 4-3. (AP Photo/Bill Kostroun)

ARLINGTON, Texas (AP) — Gleyber Torres could be back in the New York Yankees lineup as early as Wednesday, a week after the fully vaccinated shortstop tested positive for COVID-19.

Manager Aaron Boone said Tuesday that Torres had been cleared by Major League Baseball's joint committee and was already en route to Texas to rejoin the team. The shortstop could potentially be activated Wednesday.

Asymptomatic vaccinated people can be cleared to return if they test negative twice.

Torres was the only player among nine total positives within the Yankees traveling party since last week, which included three coaches and five staffers. Boone said Torres is the only one in that group cleared to return.

The shortstop had been quarantining in Tampa, where he worked out Monday and Tuesday before before heading to Texas.