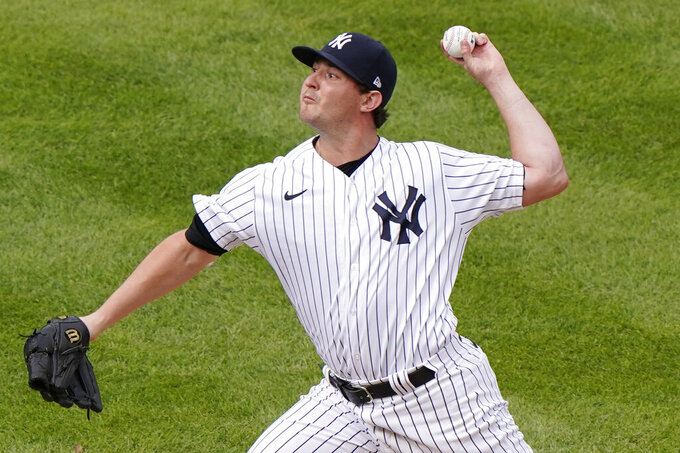 LAKELAND, Fla. (AP) — The Yankees failed to make it out of spring training without a significant injury.

Left-hander Zack Britton needs arthroscopic surgery to remove a bone chip from his pitching elbow, and New York's No. 2 reliever behind closer Aroldis Chapman seems certain to miss the start of the season.

“I appreciate the support from everyone,” Britton wrote on Twitter. “We all have daily challenges we have to overcome in order to reach our goals. Just have to keep pushing ahead! I will get this taken care of during the upcoming week and be back as asoon as I can.”

“As far as timetables and stuff like that, we'll have more in the coming day or two days,” Boone said.

Boone said Britton's ulnar collateral ligament was not suspected of being hurt, an injury that if diagnosed could lead to Tommy John surgery. Boone said Britton felt soreness Sunday night following a bullpen session and had an MRI of his elbow on Monday.

“I would say it’s always concerning any time any of your players are going through tests because they’re not quite where we want them to be," Boone said Tuesday morning before learning the diagnosis. "Zack overall feels pretty good. He’s in good spirits about it. But let’s get the answers first.”

Britton, 33, disclosed last weekend that he was recovering from COVID-19, which he contracted in January. He has not pitched in any exhibitions.

“I think set him back a little bit in his buildup,” Boone said. “Just trying to kind of get his weight up. He's actually been throwing pretty well early in spring.”

A two-time All-Star, Britton was 1-2 with a 1.89 ERA and eight saves in 20 appearances during the pandemic-shortened 2020 season. He filled in as closer for the first 3 1/2 weeks while Chapman missed 21 games recovering from COVID-19. Britton was sidelined for nine games from Aug. 20 to Sept. 1 by a strained left hamstring.

Severino is expected to be out until June or July.

In 2019, the Yankees set what is believed to be a major league record with 30 players on the injured list, making a total of 39 trips.

Britton is entering his fourth full season with the Yankees and is starting the third season of a contract now worth $52 million over four years.

Boone said Clint Frazier was not hurt when he banged into the left field wall chasing Willi Castro's homer in the fourth inning.

“Clint came out fine,” Boone said. "Actually when I got out there with Alfonso (trainer Alfonso Malguti) he was very cleared-eyed and he said he was fine. He basically said, `I know what it feels like when you obviously hit the wall,' and he said it was nothing like that. And then he checked out here before he left. Everything was good."

Frazier sustained a concussion during a spring training game at Bradenton on Feb. 24, 2018, and he took until the following year to completely move past the after-effects.