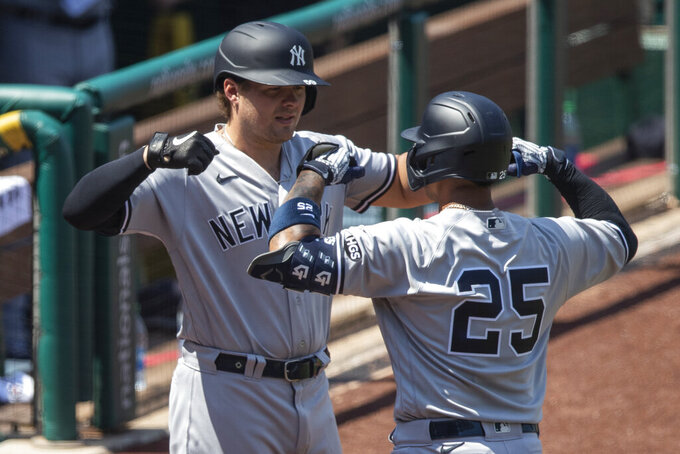 Yes, the reigning World Series champs had an actual, honest-to-goodness trumpet in their dugout Sunday. Alas, their bullpen blew a lead, so the Nationals never got the chance to jazz up a victory celebration with the brass instrument.

Facing two of Washington's top relievers, Torres homered in the seventh inning to begin the rally from a two-run hole, then tacked on a go-ahead single in the eighth, lifting New York to a 3-2 victory for wins in two of three games in the season-opening series.

Torres had started 2020 by going 0 for 7 before delivering hits in three consecutive at-bats Sunday.

“I felt a little more confident," the shortstop said. “The first couple games, I was a little too excited.”

“We were waiting for Gleyber to break out," said Luke Voit, who also homered, "and today he finally broke out in a clutch way.”

On a sunny afternoon, with the temperature topping 90, Washington's Patrick Corbin retired 18 of the first 19 Yankees batters, Trea Turner homered off Jonathan Loaisiga, and Eric Thames provided an RBI single.

But with one out in the seventh, Torres took Corbin deep on a first-pitch fastball to make it 2-1.

“A low heater in,” Corbin said. “Probably would have liked it a little more in.”

Nationals manager Dave Martinez then turned to a key new reliever, Will Harris, expected to help the team fare better in late innings than it did for much of 2019.

Harris surrendered a tying homer to Voit, who joined Torres in flexing their biceps on the way into the dugout.

In the eighth, after Sean Doolittle (0-1) put men on via a walk and single, Torres pushed New York ahead with his third hit of the day.

“I’m super-frustrated with the results,” Doolittle said, “not being able to put a zero on the board there and navigate that inning.”

After a throwing error by Torres and Adam Eaton’s double put runners on second and third for the Nationals in the eighth, Tommy Kahnle struck out Starlin Castro and Thames to get out of the jam.

“It felt like a high-pressure situation. I loved it,” Kahnle said. "Felt just like a regular season game with stakes at hand and everything. Definitely the same, even without the fans.”

Serving as the Yankees’ primary closer while Aroldis Chapman is on the COVID-19 injured list, Zack Britton worked around a leadoff infield single and a passed ball charged to Gary Sánchez in the ninth for his first save of 2020.

Pinch-runner Emilio Bonifácio tried to steal third but overslid the bag and was thrown out by Sánchez.

“It was a good aggressive play,” Martinez said. “I kind of liked it.”

Bonifácio is the utility player who brought his trumpet to the ballpark — even polished the horn with a white towel while sitting on the bench during the game.

It might just be this year’s version of Washington’s “Baby Shark” shenanigans: Bonifácio had red T-shirts made with a drawing of a gold horn, and Nationals have been pretending to play notes after base hits.

“Honestly, I really don’t know what they’re planning on doing with that thing,” Martinez said about the trumpet. “I saw it there, later in the game, Obviously they didn't blow it today.”

Yankees: RHP Masahiro Tanaka threw 42 pitches to 11 batters at New York's Scranton training camp. Tanaka, on the concussion IL, could be activated to start Friday against Boston. ... RHP Luis Cessa, who has recovered from COVID-19, threw 24 pitches and is expected to be activated in the next few days.

Nationals: Moved LHP Roenis Elías from the 10-day to the 60-day IL because of a left elbow flexor strain.

Nationals: Have four more games at Nationals Park coming up, all against the Blue Jays — the first two with Washington as the home team, and the next two with Toronto as the “home” team. On Monday, Washington RHP Aníbal Sánchez faces RHP Trent Thornton.