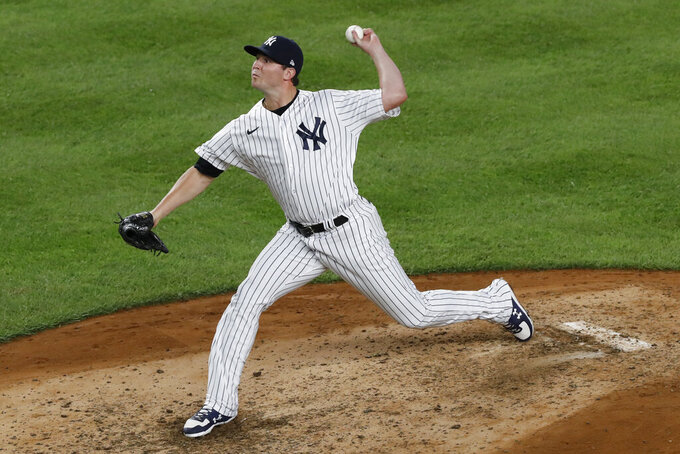 FILE - In this Aug. 3, 2020, file photo, New York Yankees relief pitcher Zack Britton winds up during the ninth inning of the team's baseball game against the Philadelphia Phillies at Yankee Stadium in New York. The Yankees plan to plan to exercise two option years on Britton worth $27 million and to decline options on outfielder Brett Gardner and pitcher J.A. Happ. The decisions were disclosed by a person familiar with the team’s decisions who spoke on the condition of anonymity Thursday, Oct. 29, because they had not been announced. (AP Photo/Kathy Willens, File)

Gardner and Happ become eligible for free agency. Gardner gets a $2.5 million buyout rather than a $10 million salary. Happ’s deal did not have a buyout.

Britton, a 32-year-old left-hander, was 1-2 with a 1.89 ERA in 20 appearances, getting eight saves and filling the closer role when Aroldis Chapman was sidelined by COVID-19 from the start of the shortened season until Aug. 17.

His deal calls for salaries of $13 million next year and $14 million in 2022. In addition to the team’s two-year option, Britton’s contract included a $13 million player option for 2021.

He got stronger as the season went on and finished with a 2-2 record and 3.47 ERA in nine starts. His $17 million option originally would have become guaranteed with 27 starts or 165 innings, but the threshold was reduced to 10 starts with the shortened season and he fell one short.

Happ gave up two-run homers to Mike Zunino in the second inning and Manuel Margot in the third of the 7-5 loss to Tampa Bay in Division Series Game 2, Happ said he would have been more comfortable starting.