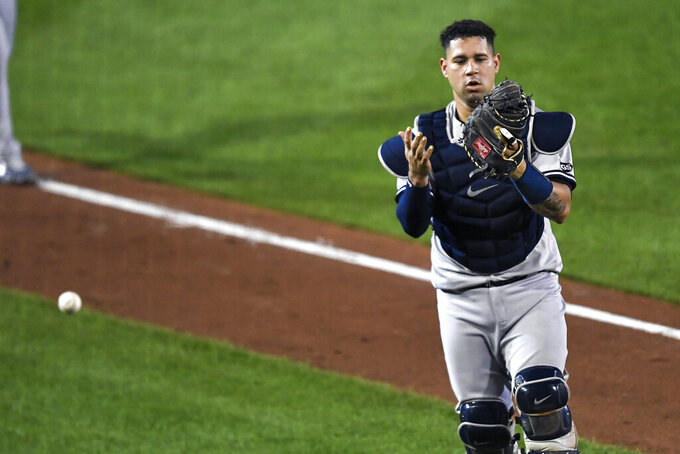 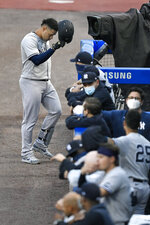 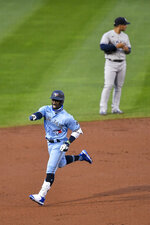 BUFFALO, N.Y. (AP) — Gary Sánchez and the slumping New York Yankees lost their fifth in a row Tuesday night and fell for the 15th time in 20 games, again failing to get clutch hits in a 2-1 loss to the Toronto Blue Jays.

Hours after general manager Brian Cashman tried to change his team’s fortunes with a pregame address, the Yankees continued to struggle.

“I almost feel like it’s embarrassing for us right now, especially with everything that’s been going on,” slugger Luke Voit said. “I feel like teams aren’t really scared of us right now and it’s kind of a sad thing.”

“Tonight we saw a lot of good at-bats up and down the order,” manager Aaron Boone said. “Just weren’t able to punch through. Close isn’t good enough right now. We need to find a way to get it done.”

Missing injured stars Aaron Judge, Giancarlo Stanton and more, the Yankees began the day tied with Houston for the last two spots in the expanded playoff field during the pandemic-shortened 60-game season.

“This team’s too good to hold down for too long,” New York infielder DJ LeMahieu said.

Jonathan Davis homered off Happ in his first at-bat of the season and the Blue Jays won their third straight, a day after beating the Yankees 12-7.

Making his first start of the season after being recalled from Toronto’s alternate training site Monday, Davis connected for his first homer on a 2-2 pitch in the second. The outfielder had played parts of the last two seasons with the Blue Jays.

Davis confirmed after the game that he had tested positive for COVID-19 before the start of summer camp. That was the furthest thing from his mind as he returned to a jubilant Toronto dugout following his homer.

“It was a party,” Davis said. “It was like it was my birthday and they celebrated. It was awesome.”

Shun Yamaguchi (2-3) allowed one run in two innings of relief to earn the win. A.J. Cole and Anthony Kay each pitched one scoreless inning, and Rafael Dolis finished for his third save in as many opportunities.

Sánchez returned to the lineup after being benched the previous two games and went 0 for 4 with a strikeout. Sánchez is stuck in a 3-for-32 funk that has dropped his batting average to .125.

“I thought he had good at bats and got off some good swings tonight,” Boone said. “Just didn’t get any results for it.”

Sánchez also dropped a foul popup for an error.

After stranding seven runners through the first four innings, New York got on the board when Voit singled and scored on Mike Tauchman’s sacrifice fly in the fifth. Sanchez struck out to strand two more.

Happ (1-2) struck out a season-best 10 and walked two in 6 1/3 innings, allowing two runs and four hits. The left-hander is 0-3 in his past four starts against his former team.

Toronto first baseman Rowdy Tellez was replaced for a pinch hitter in the eighth after injuring his right knee while chasing a foul pop up in the top half. Manager Charlie Montoyo said Tellez will undergo an MRI Wednesday.

Umpire Brennan Miller worked home plate in a Yankees game for the first time since July 2019, when Boone roasted the rookie ump with an infamously profane rant. Boone, who was suspended one game for the outburst, later apologized to Miller.

Yankees: Judge (strained calf) and Stanton (strained hamstring) both ran on the field during workouts Tuesday. “They’ve both had a good few days here,” Boone said. “I don’t have a timetable but I do feel we’re inching closer to starting to get really ramped up.” … Following the game, New York optioned OF Estevan Florial to its alternate training site.