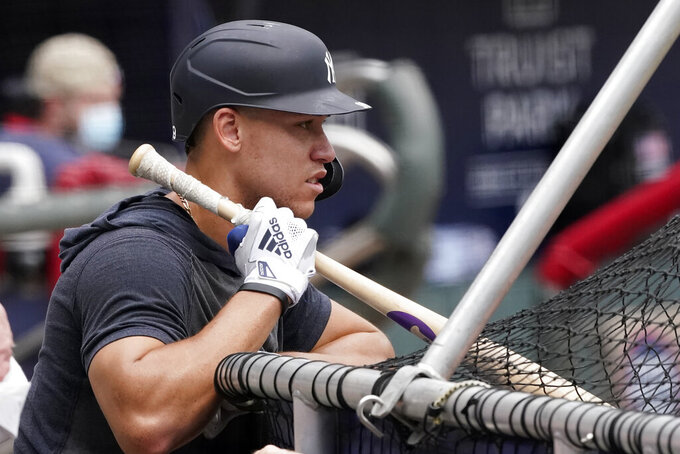 New York Yankees' Aaron Judge waits for his turn to hit during batting practice before a baseball game against the Atlanta Braves Wednesday, Aug. 26, 2020, in Atlanta. (AP Photo/John Bazemore)

NEW YORK (AP) — Ailing sluggers Aaron Judge and Giancarlo Stanton might be back in the New York Yankees' lineup as soon as next weekend.

Manager Aaron Boone said Friday that both players are at the tail-end of their recoveries and could be sent to the club's alternate site in Scranton, Pennsylvania, this weekend to get at-bats. That would put them on track to return for the final 10 or so games in this pandemic-shortened 60-game regular season.

“I would say they're both close,” Boone said. “They're both feeling well. They're both doing well. Hopefully, we're in the final days before they start getting some at-bats.”

Judge is recovering from his second stint on the injured list this season with a strained right calf and last played Aug. 26. Stanton has been out since Aug. 8 with a left hamstring strain.

New York has slumped badly without its towering power hitters. After starting this pandemic-shortened regular season 16-6, the Yankees entered Friday with 15 loss in their past 21 games, dropping to the bottom of the playoff picture.

New York started Friday 1 1/2 games ahead of Baltimore for the final postseason spot and opened a four-game series against the Orioles with a doubleheader Friday night.

Left-hander James Paxton had a setback this week in his recovery from a strained left flexor tendon, and it's uncertain whether he will pitch again this season.

Boone said there’s “still a chance on some level” that Paxton can contribute. He also said it’s possible the 31-year-old could return as a reliever. Paxton can become a free agent after the season.

“It’ll be challenging but we’ll see how day by day goes,” Boone said.

Loaisiga was expected to throw a bullpen session Friday, and Boone hopes he can be activated Tuesday.