Yanks lefty Britton has elbow surgery, likely out until May 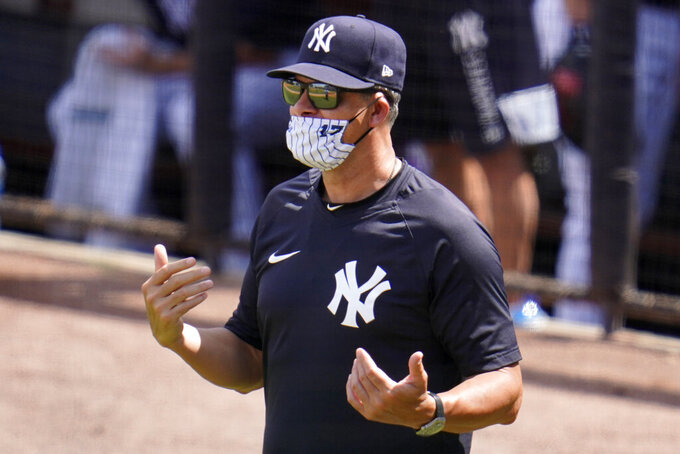 The reliever is likely to be out until at least May and perhaps until summer. The team has not specified a timeframe.

“Want to thank Dr. Ahmad and his staff for their excellent work today," Britton wrote on Twitter. “Excited to start the process of getting myself ready to rejoin the boys.”

“I think it comes down to the incision being healed," manager Aaron Boone said “That’ll tell him when he can start playing catch and start the ramp-up process. So don't want to really put a timetable on it."

Chapman is suspended for the first two games of the season by Major League Baseball for throwing a 101 mph fastball near the head of Tampa Bay’s Mike Brosseau on Sept. 1.

Catcher Robinson Chirinos is scheduled for surgery on his right wrist on Tuesday with Dr. Douglas Carlan in Tampa, Florida, six days after Chirinos was by a pitch from Pittsburgh's Blake Cederlind. Manager Aaron Boone said it appears estimated recovery time is four to six weeks.

Infielder-outfielder Miguel Andújar is receiving treatment for a muscle strain in in his right hand, and a nerve issue is being monitored, according to Boone.

“Seemed like he was a little inconsistent maybe with the breaking ball a little bit early, but really dialed that in and got nasty with that. Again, the changeup was a great pitch for him,” Boone said. “Fastball was there. Good movement, good velocity. He looked really polished."

In his return from a domestic violence suspension that started in September 2019, Germán has pitched nine scoreless innings, allowing five hits, striking out 13 and walking one. He is competing with Deivi García to be the fifth starter in a rotation with Gerrit Cole, Corey Kluber, Jameson Taillon and Jordan Montgomery.

“The decision for April 1 isn’t the final decision," Boone said. “I go back to a couple years ago when DJ LeMahieu wasn’t in the starting lineup on opening day. I knew he was going to play pretty much every day, but it’s like somebody's got to sit on opening day and that’s the story, but it’s a long season. And I just feel really good about where all our starters or — slash guys who give us length — I feel like we’re in a pretty good spot with them right now, and we’re going to need them all.”