Young, Galvin getting rematch for US House seat 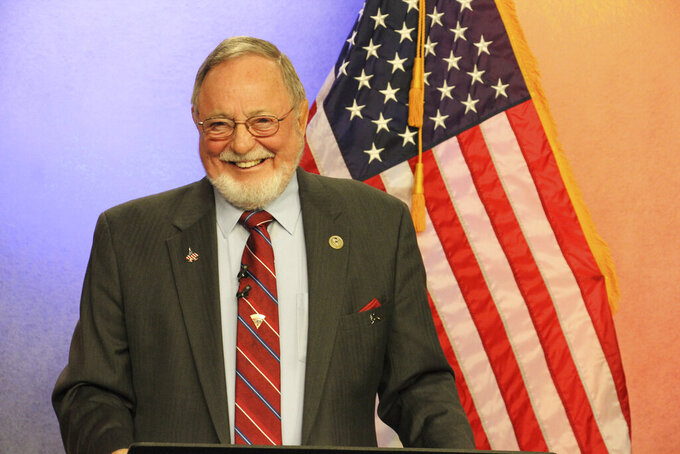 ANCHORAGE, Alaska (AP) — Don Young and Alyse Galvin will face off once again in the race to be Alaska’s sole representative in the U.S. House.

Young, the House's longest-ever serving Republican, won the Republican primary Tuesday, his first step in an effort to win a 25th term. He was first elected in 1973.

Alyse Galvin, a nonpartisan candidate, won the Democratic primary with the party's backing. She lost by 7 percentage points to Young in the 2018 general election.

Young’s campaign manager, Truman Reed, in a statement said the congressman “is grateful for the opportunity to continue to represent Alaskans. We are excited by the momentum we are seeing across the state and the Congressman is energized for the general election.”

Galvin attributed part of her win to running again after her loss two years ago.

“I think Alaskans like grit,” she told The Associated Press.

“And I got in really early to make sure that I could have those longer conversations that I think it’s going to take to earn the trust after, you know, so many years, 47 years of one representative. But what I’m hearing is that they’re ready for that kind of change," she said.

While Galvin sees an opportunity for new ideas, Young touts his experience.

“Alaskans trust and know that Don Young fights for Alaska and wins the battles we can’t afford to lose,” Reed said, while casting Galvin as “one of the most liberal candidates Alaska has ever seen.”

While some Republican incumbents are distancing themselves from President Donald Trump in the election, Young isn't.

Trump on Thursday tweeted his “complete and total endorsement” for Young. Trump said Young loves his state “and works tirelessly” for Alaska.

Young replied to Trump in his own tweet: “You’ve been a great partner for Alaska and our country. Keep up the good work!”

Young defeated two little-known challengers in the Republican primary, T. “John” Nelson and Gerald Heikes, neither of whom reported raising any money.

Young, who is known for his off-the-cuff comments and sometimes abrasive demeanor, made headlines in March when he downplayed the seriousness of the coronavirus to an audience that included older Alaskans. Young himself is 87.

Reed told a newspaper he believed Young was trying to urge calm. Young has posted pictures of himself wearing a mask on his social media feed. He was also pictured wearing a mask when he voted early in Anchorage on Thursday.

Alan Smith of Anchorage voted in person in Anchorage on Tuesday. He said he had no worries about the coronavirus.

Polling places offered masks along with hand sanitizer and gloves. And social distancing wasn’t a problem. “Look at this space; it’s really not crowded,” he said.

He voted for Galvin. “She was the only one I recognized,” he said.

Frederick Moore, who also wore a mask, had no qualms about voting in person at St. Innocent Russian Orthodox Church.

He voted for Young. “He’s been doing a great job over the years,” Moore said.

In her primary, Galvin defeated William “Bill” Hibler and Ray Sean Tugatuk, neither of whom reported raising any money.

Galvin, 55, an education advocate, has maintained an active social media presence and began campaigning for the race last year, hoping to build off the network she cultivated in her prior run.

Because of COVID-19, Galvin has been conducting virtual town halls, virtual roundtables and virtual living room gatherings, covering a lot of ground it would be difficult to do in person. Just this week, she took part in virtual gatherings in Fairbanks, Anchorage, Ketchikan and Valdez.

She said people are attending, and they feel safe. “I think they’re showing up even more because it feels a little bit like a reunion. And people are looking for conversations, especially ones that are meaningful and helpful,” she said.

She also is taking her campaign RV out on the road system. “I think it’s important that I get out to communities in small settings where it’s safe and appropriate,” she said.

From April through June, she significantly outraised Young and held an edge in available cash on hand.

The general election is Nov. 3.

This story has been corrected to show Young defeated Galvin by 7 percentage points in 2018 and not 9.