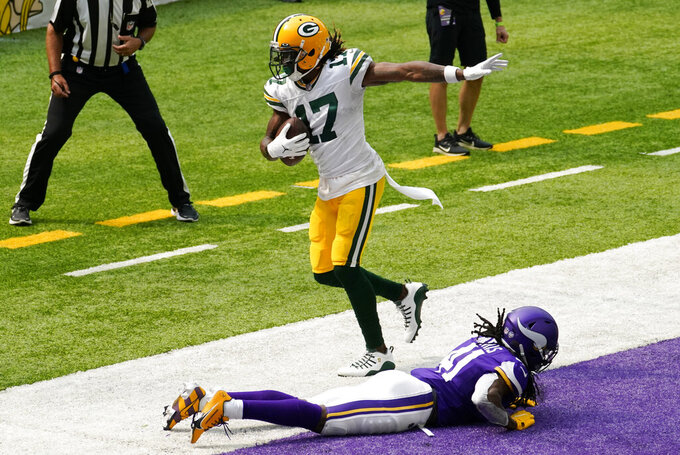 MINNEAPOLIS (AP) — Since Mike Zimmer was hired as coach of the Vikings in 2014, Minnesota has built one of the NFL's best defenses.

His acumen as a teacher and strategist will be stress-tested like never before this year.

Aaron Rodgers took full advantage of the young cornerbacks and the empty stadium in Minnesota, beginning his 13th season as Green Bay’s starting quarterback by passing for 364 yards and four touchdowns to lead the Packers past the Vikings 43-34 on Sunday.

“Anytime you play Aaron Rodgers, you’ve got to know that’s possible,” said Vikings safety Harrison Smith, now the longest-tenured player on a defense that had only five starters in this game from the end of last season.

The group was renovated out of salary-cap necessity, as hefty new contracts were given to quarterback Kirk Cousins and running back Dalvin Cook. Zimmer was given an extension during the offseason, too, a sign of confidence from team ownership that the hard-nosed 64-year-old remains the right leader for a team that has been a consistent contender but only won two postseason games on his watch.

The formula for success has frequently centered around an aggressive-in-coverage, strong-tackling group of cornerbacks buoyed by a fierce pass rush, vital remedies in an era when quarterback play is as strong as ever. The Vikings, though, will have a hard time developing either of those assets this year, let alone both.

All three of their primary cornerbacks, Xavier Rhodes, Trae Waynes and Mackensie Alexander, were among the departed regulars. So were defensive end Everson Griffen and nose tackle Linval Joseph, whose replacement, Michael Pierce, opted out of the season entirely due to health concerns amid the COVID-19 pandemic. Then came the biggest blow, an injury to defensive end Danielle Hunter that the Vikings tried to downplay before placing the two-time Pro Bowl pick on injured reserve with what ESPN reported was a neck problem.

New defensive end Yannick Ngakoue, acquired from Jacksonville last month, was a nonfactor in this game. Ifaedi Odenigbo was the only one who even came close to disrupting a throw by Rodgers, who was sacked 12 times in the previous three full games he played at U.S. Bank Stadium. This was the first full game he played in Minnesota without being sacked.

“Definitely different without Xavier and Trae, having played against them for a number of years,” Rodgers said. “As we saw with various young corners we’ve played over the years, if you don’t make plays on them early, they’re going to figure it out at some point. We were able to get the ball down the field at times today. Guys made some contested catches, but they’ve got some good young corners.”

The praise from Rodgers was hardly consolation for the Vikings, after the Packers held the ball for a whopping 41:16. They converted six of 11 third downs and one of two fourth downs.

“When you do have fans in the stadium and you’re not playing very good, and it’s quiet — that’s how it was today, all day,” Zimmer said.

Mike Hughes and Holton Hill were the primary cornerbacks, both of them 23 years old and carrying fewer than 25 games of NFL experience into this matchup. Third-round draft pick Cameron Dantzler, who played frequently, had none. First-rounder Jeff Gladney played sparingly.