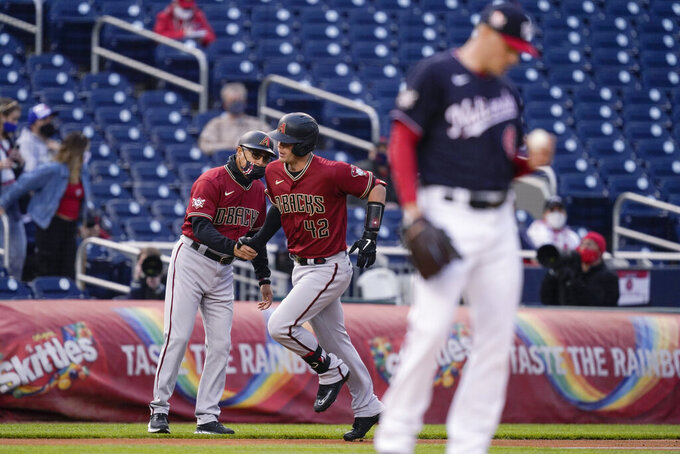 WASHINGTON (AP) — Boos cut through the windy, chilly night at Nationals Park as Patrick Corbin struggled for the second time in two starts in 2021 and Washington was on its way to falling to 3-7.

And that was even before Andrew Young's first hit of the season was a grand slam that capped Arizona’s 10-run outburst in just two innings against Corbin on Thursday, putting the Diamondbacks on course for an 11-6 victory over the Nationals.

As for Corbin's own analysis of what is going wrong so far? Sum it up as befuddlement.

“I’m still trying to figure it out. I’m not really sure. I can't really point to one thing,” he said. “It would be nice to know if there’s one thing or a couple things. I'm not quite sure.”

Here's what counted as good news, at least: “I feel all right,” said Corbin, in the third season of a six-year, $140 million contract he signed as a free agent after two All-Star appearances for Arizona.

He was such a key cog in Washington’s run to the 2019 World Series championship, doing double duty in the rotation and in relief. Since then, though, he is 2-9. On Thursday, he was the cause of the jeers from the announced crowd of 6,666.

That’s the thing about bringing back spectators to baseball stadiums: The more there are, and the worse the home team plays, the more likely there is to be displeasure voiced. After zero fans at Nationals Park last season because of the coronavirus pandemic, then a limit of 5,000 for this month’s opening homestand, the capacity was allowed to roughly double Thursday.

Corbin allowed nine earned runs while getting merely six outs against the Diamondbacks (5-8), an awful outing that included a pair of hit batters, a trio of homers and a quartet of walks.

Moved up to second in the batting order, Carson Kelly put Corbin’s eighth pitch into the seats in right-center. The next batter, Eduardo Escobar, sent one over the wall in left-center for his fifth homer. It was 3-0 after the top of the first, and while the Nationals went up 4-3 in the bottom half against Merrill Kelly (1-2), thanks in part to Starlin Castro’s two-run shot, the Diamondbacks piled on in the second.

Arizona batted around for the second time and tacked on seven more runs as the temperature dropped into the low 50s.

“He put a tremendous swing on a good pitch,” Carson Kelly said.

Other runs came via a walk, a hit batter and an error.

It was even worse than Corbin’s other start of 2021, when he gave up six runs in 4 1/3 innings of a 9-5 loss to the Los Angeles Dodgers last weekend.

Arizona 3B Asdrúbal Cabrera went 0 for 6 against his former club: He played for Washington in 2014, 2019 and 2020, including starting five World Series games two seasons ago. “I’m never going to forget that year,” Cabrera said. ... Merrill Kelly went six-plus innings, allowing six runs and nine hits. ... Pavin Smith added a solo shot for Arizona in the eighth off Daniel Hudson.

Diamondbacks: Relief pitcher Joakim Soria (strained left calf) is throwing on flat ground and “if all progresses,” he is expected to throw a bullpen off a mound Saturday, manager Torey Lovullo said. ... 1B coach Dave McKay, 71, still is dealing with a broken rib and an “inability to take deep breaths” after a dugout fall more than a month ago at spring training, Lovullo said.