Zack Snyder blends social commentary into ‘Army of The Dead’ 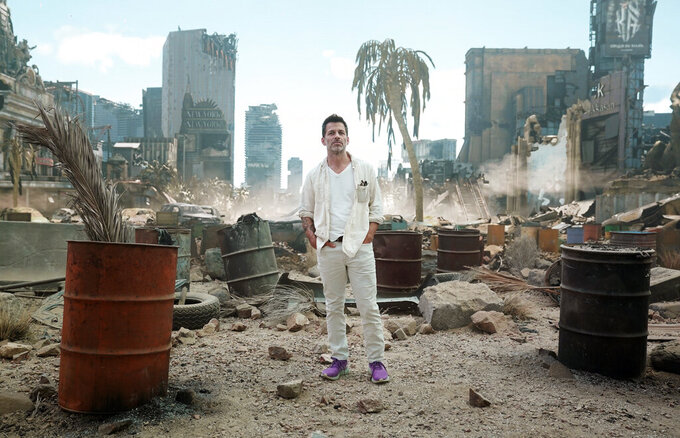 Director Zack Snyder poses for a portrait on a virtual production stage featuring an apocalyptic Las Vegas background to promote his new film "Army of the Dead," Friday, May 7, 2021, in El Segundo, Calif. (AP Photo/Chris Pizzello)

LOS ANGELES (AP) — The elevator pitch for Zack Snyder’s “Army of the Dead” would read something like this: “28 Days Later…” meets “Oceans 11.” But watching the film reveals more than a Las Vegas zombie heist thriller as layers of subtext emerge reflecting current social issues.

Building a wall to contain people, detainment camps, quarantining those suspected of carrying the zombie virus, and political debate are just a few references that play a role in the story.

“I felt like to really do the genre correctly, social commentary is at its heart and at its roots,” said Snyder, who directed, co-wrote the screenplay and shot the film.

Known for his strong visual style in blockbusters like “300,” and “Justice League,” it was a zombie flick that Snyder cut his teeth on as a director with the 2004 remake of “Dawn of the Dead.”

He credits the film’s original director, George A. Romero with using the undead to tell more than just a scary story. “Romero really took the zombie genre and made great social commentary,” Snyder said.

Romero’s 1968 cult classic “Night of the Living Dead” — and subsequent films in the series — tackled a barrage of issues including, racism, nuclear war and consumerism.

In “Army of the Dead,” a wall built around Las Vegas to contain the zombie outbreak keeps that tradition alive, mirroring the debate over building a wall at the U.S. southern border.

“We were building a wall. We were creating these refugee camps,” Snyder said. “We needed to kind of use those things to hold up a mirror to ourselves.”

Yet, the wall motif did not begin as a political statement. Snyder claims it was more a function of the plot to keep the zombies in one place until the social implications emerged.

“Once you erect a giant wall around a city, you really find yourself referencing all kinds of laws that have been created for all different reasons. And I think your awareness of those things really is important,” Snyder said.

For German actor Matthias Schweighofer that element of the story touched a nerve.

“I was born behind a wall in the east of Germany and the wall came down and I always thought as I traveled through the world, ‘I don’t want a wall back in my life. I don’t want any borders back,’” he said.

In the film, the zombies are “contained” in Las Vegas so the military can drop a low-level nuclear bomb to rid the world of the threat. A rich businessman, played by Japanese actor Hiroyuki Sanada, offers a team of mercenaries a sizable fortune if they can retrieve $200 million in a casino vault.

Schweighofer plays a safecracker alongside Omari Hardwicke. Other members of the team who venture into the zombie-infested quarantine zone include “Narcos” actor Ana de la Reguera, the multi-hyphenated Tig Notaro, and Dave Bautista.

Bautista called working on the film the most fun he’d ever had on any project, and he was equally impressed with how Snyder addressed some of the issues we face as a society.

The former WWE superstar never thought much about the zombie trope, until Snyder pointed out that they are people stripped of their humanity “feeding off of other human beings. “

“They just have no humanity left. And I thought, ‘Man, that’s really terrifying.’ But also, like, ‘God, what a message. What a what a metaphor,’” Bautista said.

But these are not your father's zombie. They're faster, smarter, and organized, making the mission far more dangerous than what you might see on “The Walking Dead.”

The film also stars Theo Rossi, Huma Qureshi, and Nora Arnezeder. While the zombies clearly represent a segment of society devoid of humanity, it was the inclusive nature of the team that made the biggest impact for Bautista.

“If you really read into it, you’d see a bunch of people who are from all over the world of very different colors who are kind of banding together just to survive,” Bautista said.

After being released in theaters last week, “Army of the Dead” will be available on Netflix this Friday.

Clocking in at two-and-a-half hours, don’t expect an alternate version known as the “Snyder cut.” This time, the filmmaker had enough time to tell the story exactly how he wanted.

“The great thing about Netflix and this movie is that you got to see the Snyder cut of this movie pretty much. You don’t have to wait four years,” Snyder said.

One image may resonate with viewers. It's a scene where a camp guard measures the body temperature of the refugees with a temperature gun that seemed to make a statement on COVID-19 pandemic. But the film was shot before the world closed down.

“It’s funny because when we were doing the scene I was saying no one’s ever pointed a temperature gun at me before,” Snyder said. “Now I have one pointed at me every day.”