Zambia says it will default on debt owed private investors 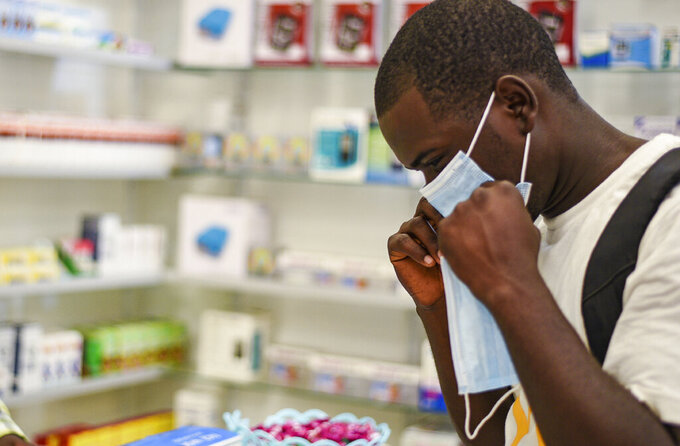 FILE — In this Feb. 6, 2020 file photo, a man tries on a face mask at a pharmacy in Kitwe, Zambia. Zambia faces a Friday, Nov. 13 deadline to clear debt owed to external investors who have rejected the country's request for deferral of an overdue $42.5 million interest payment amid the coronavirus pandemic. (AP Photo/Emmanuel Mwiche, file)

LUSAKA, ZAMBIA (AP) — Zambia's government said it would miss a Friday deadline to clear debt owed to external investors who rejected the country's request for deferral of an overdue $42.5 million interest payment.

The southern African country had to pay up by Saturday to avoid becoming the first African nation to default amid the coronavirus pandemic after repeatedly failing to win a six-month holiday from eurobond holders who account for about $3 billion of Zambia's sovereign debt.

“The position of government is that we have to treat all creditors equally," Finance Minister Bwalya Ng'andu told journalists. "Pari passu principle is the principal that we are operating on because you probably know that the bondholders only consist part of the entire debt stock... We require that all of them are treated fairly and equally, because if we don’t do that we create an environment that is somewhat hostile.”

A group of private creditors earlier on Friday had rejected Zambia's request for a holiday until April. In a statement the government said it remained “committed to finding a consensual and collaborative resolution to debt sustainability issues" despite the decision of the creditors.

Many sub-Saharan African countries, from Cameroon to Kenya, have issued eurobonds over the years, amassing debt that is maturing at a time of rising financial burden amid the pandemic.

Zambia, one of the world's top producers of copper, would become the first African sovereign to default during the pandemic, which has heightened fiscal pressures in low-income countries that don't collect enough revenue to meet all budgetary spending needs.

How Zambia navigates the situation will be closely monitored by others in the region. African authorities have said they need debt relief in order to focus on urgent public services, including health care.

Some aid groups have urged Africa's creditors to show understanding.

“Zambia may be the first country to default on its debt since the start of the pandemic, but it certainly won’t be the last if international creditors refuse to work together and support a comprehensive debt standstill," ONE Campaign, a global movement working to end extreme poverty, said in a statement. “At a time when Zambia is trying to manage the shock of COVID-19, the relentless pressure from international creditors, especially private creditors, is wrong and economically shortsighted."

Cash-strapped Zambia has long been seen as example of unsustainable debt. A joint analysis by the World Bank and the International Monetary Fund reported last year that the country was at high risk of external debt distress.

Appetite for debt has grown tremendously in Africa as governments launch ambitious public works they believe will underpin growth for years to come. The projects are often funded by Chinese capital and built with Chinese expertise. In turn, China has been keen to exploit Africa’s vast natural resources in countries such as Zambia, which also is a major producer of cobalt.

Backed by credit from China and other outside sources, Zambian authorities have been spending on everything from highways to airports in projects sometimes tainted by official corruption. Such spending likely will slow down because of pressure to reduce arrears, and there are multiple reports of stalled projects, including a $450 million dam.

China holds about a third of Africa’s sovereign debt, and there have been concerns that heavily indebted countries could fall into a trap and even lose their sovereignty.

The World Bank and IMF have announced some relief measures, including freeing up billions in debt payments through the end of 2020, and some African countries have secured more loans from those institutions.

A summit next week of leaders under the G20 club of wealthy nationsg may announce debt relief for poor countries.