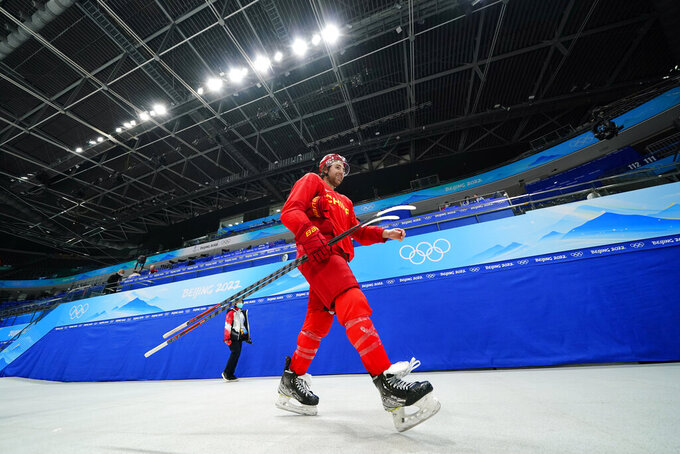 China's Wei Ruike leaves the ice after a practice session at the National Indoor Stadium at the 2022 Winter Olympics, Tuesday, Feb. 1, 2022, in Beijing. (AP Photo/Matt Slocum)

BEIJING (AP) — Players at the Olympics have gotten used to a specific sound at the end of practices that cuts the air differently than pucks clanking off iron posts or smacking into the glass.

Zamboni operators have not been stingy with the horn at National Indoor Stadium and the attached training rink, driving onto the ice the minute that practices are scheduled to end to clear players off and get ready for the next session. Some players and staff have even been forced to pick up their own pucks before exiting.

From getting rushed off the ice, a U.S.-Canada scrimmage that was more like a pickup game on a pond than an exhibition and all 12 teams staying in the same village, the Beijing Olympics have a peewee hockey tournament feel.

“There’s always something going on," Canada forward Adam Cracknell said. "But that’s all part of the experience and something a lot of us won’t forget.”

With no exhibition action planned, USA Hockey and Hockey Canada organized the first multiteam scrimmage in Beijing days before the start of the preliminary round. Referees were not allowed, so Canada taxi squad players dropped the puck and whistled for offside and other stoppages, while coaches shouted from each bench about who wanted a power play at a certain time so they could practice special teams.

Canada as the “home” team brought the warmup music, which was played at a much lower volume out of a personal device on the bench than the familiar blare from arena loudspeakers.

“We had a couple of guys that were dialed in on it," Canada captain Eric Staal said of the warmup tunes. “It wasn’t quite loud enough. But the effort’s there, and that’s what you want.”

China's players put in a little more effort than they expected at the end of practice when the Zamboni driver laid on the horn to shepherd them off the ice. They picked up all the pucks and dropped them in buckets to help the ice crew before leaving with some bafflement.

“I don't know,” China forward Ethan Werek said. “We were nice enough to pick the pucks up.”

Many times, players skate off in a hurry because their time is up. It's a far cry from the NHL and other pro hockey when players stay on the ice long after practice is over to get in some extra work or just have fun with teammates.

“We need all the ice we can get,” Canada coach Jeremy Colliton said. “We’re practicing right to the end, and then guys want to mess around. They’re used to having two hours of ice time to mess with.”

There's no such luxury for practice time at the Olympics, which has been tightly controlled. Teams are not allowed to get on the ice until the clock hits the exact minute listed on the schedule and do not have much leeway when time expires.

“It’s just kind of part of the deal,” U.S. forward Justin Abdelkader said. “It is what it is, it’s funny, but they’re under orders, I know. They’re going to get heat if they don’t get out on time, so I get it.”

Seconds after he and his Slovakia teammates were ushered off the ice at the end of practice, Juraj Slafkovsky pointed out that that does not usually happen on his pro team. The youngest player in the tournament just figures it's part of being at the Olympics.

“It’s a rare thing at tournaments that they push us (off),” he said. “But we cannot change this.”