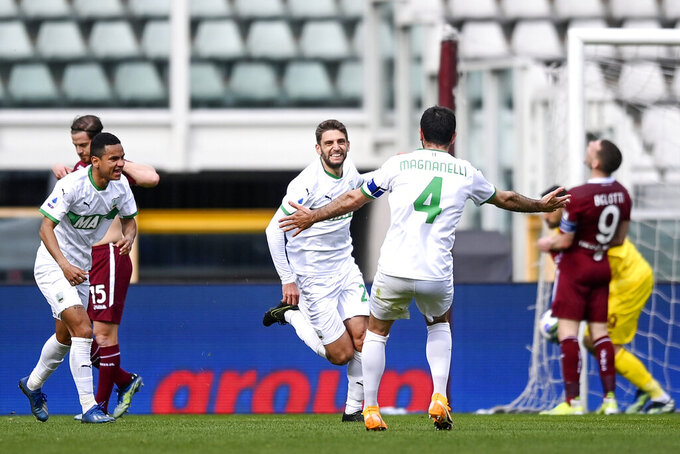 Sassuolo's Domenico Berardi, center, facing camera, celebrates after scoring during the Serie A soccer match between Torino and Sassuolo at the Turin Olympic stadium, Wednesday, March 17, 2021. (Fabio Ferrari/LaPresse via AP)

Zaza headed in the winner in stoppage time and was then surrounded by the Torino players and coaching staff, which rushed onto the field to hug him.

Sassuolo was 2-0 up with 13 minutes remaining after Domenico Berardi’s first-half double. But Zaza pulled one back for Torino and Rolando Mandragora netted the equalizer 10 minutes later.

Torino moved out of the relegation zone, a point above the bottom three having played a match less than the teams around it.

The match was rearranged from last month because of a number of coronavirus cases in the Torino squad.

Sassuolo took the lead when Filip Duričić found Francesco Caputo with a chipped pass and he touched it on for Berardi to fire past Salvatore Sirigu in the sixth minute.

Berardi doubled his and Sassuolo’s tally shortly before halftime with a powerful volley from a tight angle.

Torino pulled one back in the 77th when Antonio Sanabria headed on Andrea Belotti’s pass for Zaza to fire into the bottom right.

And the hosts leveled shortly after as Amer Gojak’s deflected shot was parried by Andrea Consigli but Mandragora was there to tap in the rebound.

Sirigu pulled off a stunning save to deny Obiang before Zaza headed Cristian Ansaldi’s cross into the bottom right corner in the second minute of stoppage time.