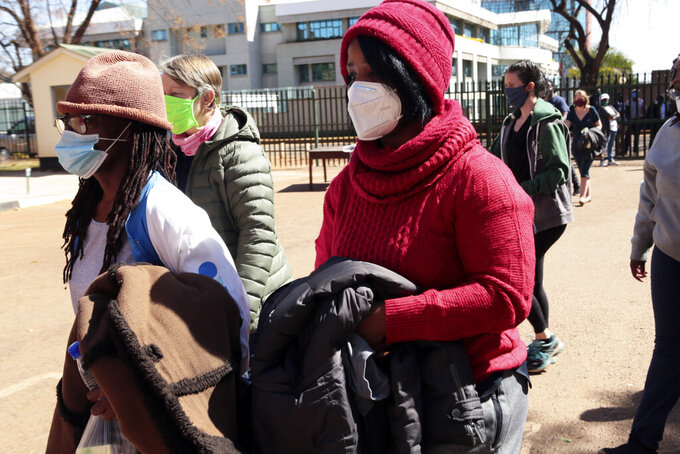 Tsitsi Dangerembga, left, prominent Zimbabwean author and Fadzayi Mahere, right, spokeswoman for the main opposition party, appear at the magistrates courts with others in Harare, Saturday, Aug, 1, 2020. Police arrested scores of people in Harare and other towns in Friday's protests according to the Zimbabwe Lawyers for Human Rights. (AP Photo/Tsvangirayi Mukwazhi)

More than 60 people have been arrested so far in the continuing clampdown, said Zimbabwe Lawyers for Human Rights, which is providing lawyers for the arrested people. Last week internationally known author Tsitsi Dangarembga was arrested for a peaceful protest and spent a night in police cells before being released on bail.

Zimbabwe’s main opposition party, the MDC Alliance, says dozens of its officials have been arrested or have gone into hiding. If state agents do not find the person they want to arrest, they often vandalize their homes and harass their relatives, said opposition spokesman Tendai Biti.

The Zimbabwean police and government officials have repeatedly denied allegations of human rights abuses, saying those arrested or being sought by the police were inciting people to revolt against Mnangagwa’s government.

On Monday, a judge postponed until Thursday a bail hearing for Hopewell Chin’ono, an investigative journalist who has been in jail for two weeks on accusations of mobilizing the foiled protests.

Another investigative journalist, Mdudzuzi Mathuthu, prominent for reporting on alleged government corruption linked to purchases of COVID-19 personal procurement equipment and drugs, is in hiding.

“I am hiding like a rat in my own country for doing nothing more than my job,” Mathuthu told The Associated Press Monday.

“Journalism is just a job, but in Zimbabwe it can be a matter of life and death. They have not only come just after me, but my family as well,” he said.

His nephew, Tawanda Muchehiwa, who family members say was abducted by state security agents last week to force the journalist to surrender, was dropped near his home Saturday, hours after a judge ordered police to “produce him.”

Muchehiwa, a journalism student, is receiving medical treatment after alleged torture caused him to suffer “severe injuries resulting in acute renal failure and severe tissue damage around the buttocks and under the feet,” according to his lawyer, Nqobani Sithole. The alleged abuse included forcing him to drink his own urine, the lawyer said.

The ongoing arrests are “worrying,” said Dewa Mavhinga, Human Rights Watch director for Southern Africa. He noted that some students were arrested for simply walking in their neighborhoods with a Zimbabwean flag or tweeting about Zimbabwe's deepening economic and political problems.

“The continued security forces clampdown shows that nothing has changed since the repressive days of Robert Mugabe. Those who protested on Friday did so in small groups, yet activists are still being hunted down, it shows lack of respect for the right to peacefully demonstrate,” he said.

Mugabe ruled Zimbabwe with an iron fist for 37 years, before being deposed through a coup in 2017. Mnangagwa, who had been Mugabe's deputy, promised “ a flowering of democracy” when he took over after the coup, but critics say his rule has been rife with abuses.