Lacrosse's new, fast-paced version may be path into LA Games 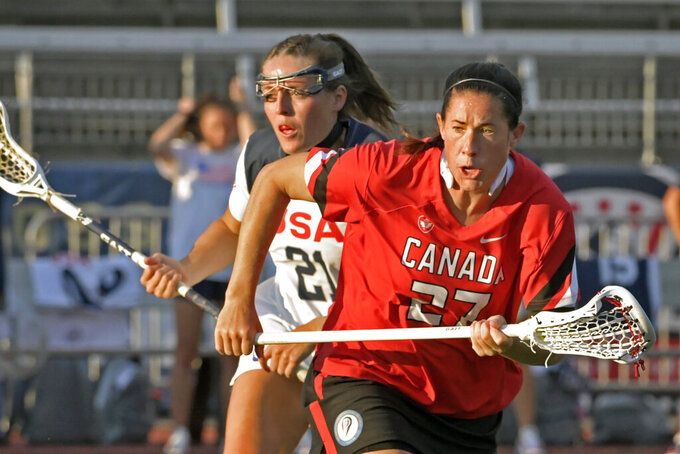 Not because the 37-year-old helped design the blueprint for the revved-up format that produces an abundance of offense. Not because Dobbie helped Team Canada to a gold medal under the sport's latest rendition at The World Games last month in Birmingham, Alabama.

It's because of this: It just might be the version that gets lacrosse — invented centuries ago by Native Americans — into the Olympic program for the 2028 Los Angeles Summer Games.

Lacrosse is competing with baseball/softball, cricket, flag football, break dancing, karate, kickboxing, squash and motorsport for a possible spot when the Summer Games return to North America for the first time since Atlanta in 1996. The contending sports should find out their entry status ahead of an International Olympic Committee session in Mumbai sometime in mid-2023. There are currently 28 sports on the Olympic program for LA.

Dobbie and the lacrosse community are imagining the possibilities of a return for a sport — think basketball meets soccer meets hockey — that once was in the Olympics. Lacrosse was part of the 1904 Games in St. Louis, and four years later in London. It last appeared in the 1948 Olympics, also in London, as a demonstration sport.

“People are going to be so excited to watch and once they watch the first game, I think we’re going to have them locked in,” said Dobbie, who plays, coaches at Loyola University in Maryland and serves on the World Lacrosse board as the vice chair of the athletes commission. “We’re going to have a lot of new fans from around the world once they see it for the first time.”

Dobbie played a part in fine-tuning this 6-on-6, warp-speed form of lacrosse. It features a 30-second shot clock and no faceoffs after scores, with goalies initiating play. The game also consists of four 8-minute quarters and played on a smaller field. There are reduced roster sizes, too.

Translation: just what the IOC may be looking for. The streamlined game borrowed a page from rugby sevens, which made it into the Olympics for the 2016 Rio de Janeiro Games. Not only that but 3-on-3 basketball, which had its debut last summer at the Tokyo Olympics.

“I wish I could jump back in a time machine 10 years, because I grew up playing hoops and this version of lacrosse and the ‘Sixes’ format with a short field is as close to lacrosse meets basketball as I’ve ever seen,” said Paul Rabil, the 36-year-old retired lacrosse great who founded the Premier Lacrosse League with his brother, Mike. “So I’d be chomping at the bit to get on this action.”

The growth of lacrosse has been on an upward trajectory over the last two decades. It's seen member federations increase from 12 in 2002 to its current number of 77, according to World Lacrosse, the sport's governing body. The Africa Association of Lacrosse was formed earlier this year to give lacrosse representation in each of the five continental regions recognized by the IOC: Africa, America, Asia, Europe and Oceania.

World Lacrosse recently launched a campaign to celebrate the sport's origin and growth. Titled “LAX: Indigenous Made, Globally Played,” (hashtag: #LAX28) this initiative was designed to spotlight its Olympic-caliber credentials.

“Lacrosse Sixes” — or “Sixes” — was established in 2018 and formally launched in 2020 — a modern take on what's considered the oldest team sport in North America.

The new version was on display at The World Games, an event that featured more than 30 sports and many that aren't on the current Olympic program. It was standing-room-only for the men’s medal games (Team Canada earned the gold) and nearly full for the women's championship.

Rabil can only imagine the upsurge if lacrosse was in the “LA28 Games."

“When you’re that next generation and you see your favorite sport being competed for a gold medal on the Olympic stage, you feel something special," Rabil said. “Perhaps a new fire (is lit) and you chase that dream to be an Olympian.”

The picture told the story: Dobbie had the gold medal firmly grasped in her left hand and a section cut from the lacrosse net tucked into her jersey. A radiant smile, too, as she posed with her Canadian teammates.

This was the celebratory scene after helping Team Canada to a 14-12 win over the United States in The World Games final.

For a chance at a similar sort of celebration at the “LA28 Games,” Dobbie might even be willing to hang on a while longer as a player.

“I can’t say no but I also can’t say yes. We'll just keep it up in the air," Dobbie said with a laugh. “Lacrosse and the Olympics — it has a nice ring to it."