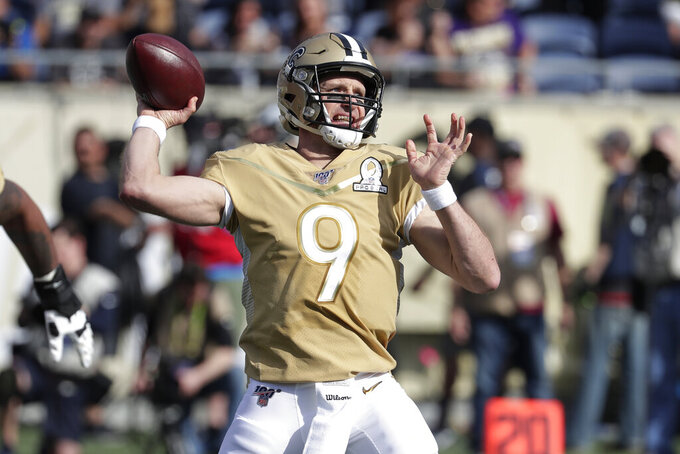 FILE - In this Jan. 26, 2020, file photo, NFC quarterback Drew Brees, of the New Orleans Saints, (9) looks to pass during the first half of the NFL Pro Bowl football game in Orlando, Fla. Atlanta Falcons coach Dan Quinn says the NFC South “is turning into Quarterback South.” The priority to “bring it” on defense was evident in the NFL draft. (AP Photo/John Raoux, File)

Beginning Monday, participating athletes will share a personal thank-you message on social media using #TheRealHeroes. Throughout the public service announcements and personal tributes, athletes will cover their own name on their jerseys or uniforms and replace it with the name of the health care worker they are honoring.

PSAs will debut on Wednesday across league and team platforms. The other leagues participating are the ATP, NASCAR, NWSL, USGA, WNBA, WTA as well as the WWE and esports Overwatch League, Call of Duty League and Electronic Arts.

The leagues teamed up with creative agency 72andSunny and production company Hecho Studios for the campaign.